April 1 2015
82
On the "online army" Putin told his readers the British newspaper «Independent». Allegedly, there is a whole “factory” of network commentators generously funded by the Kremlin. The goal of these people is to work round the clock to the glory of Putin, filling websites and social networks with relevant comments. The daily task of one “blogger” is to write at least 135 comments. Otherwise - the dismissal! 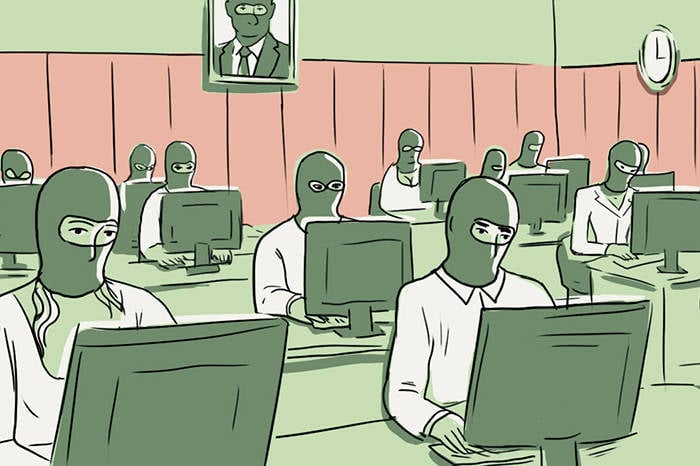 Paul Gallagher in the next issue "Independent" told the world about Putin’s “online army”. The indicated army, according to the observer, is a network of “pro-Kremlin commentators”. Anyone who "decides" to read articles on Russia will find Putin's virtual fighters. On the most different sites.

According to a British journalist, “one former fighter” recently left the “troll factory,” where Russian-funded workers work like bees “12 hours a day,” posting pro-Putin propaganda comments on sites News and on social networks.

The company, in which the blogger had a chance to work, operates 24 hours a day and seven days a week. Production "shops" of this "factory" are located "in a modest four-storey modern building", a little inferior in scope to the Ministry of Truth, outlined by George Orwell in the novel "1984".

Hundreds of propaganda workers are paid above the Russian average — about 500 pounds per month. (More than 40.000 rubles at the current market rate. - O. Ch.) For this money, the employee must issue at least 135 comments per shift. Those who do not comply with the norm are “immediately” dismissed.

The strictest rules of the “repressive system” operate in the “factory” workshops: never laugh and never be late (a fine for one minute delay has been introduced). Friendship is not welcome here.

The troll operation scheme is simple. After the release of some kind of publication on the regional news forum (Burkhard allegedly had a regional specialization), the production "army of trolls" starts commenting. A team of three people is being created: one of them is playing a “villain” who criticizes the government, the other two come to an argument with him, supporting government officials.

One of the “pro-Kremlin couples” must provide a graph or picture that fits into the context, the second is obliged to find a link to some content that would substantiate his argument.

"You see? The villain, the photograph, the link, ”explained Mr. Burckhard, giving an interview to Radio Liberty, which Paul Gallagher refers to.

“Thus, our small team of three people crosses the whole country, stopping at each forum from Kaliningrad to Vladivostok,” the blogger quoted the reporter as saying. - We create the illusion of genuine activity in these forums. We write something, we respond to each other. There are keywords, tags that are required for search engines. We have been given five key words - say, among them there is a “Minister of Defense” or “Russian Army”. We, all three, must make sure that these keywords are everywhere in our comments. ”

The former worker of the “factory” also said that there was no acceptance of shyness in expressing thoughts. For example, one should write something about Obama, and workers could write “what they want”, even curses, as long as the word “Obama” was present in the comments, and more often.

Or, the instruction is given: at the end of the commentary to conclude that Obama "does not understand anything in culture." He arrived in India, and there he chewed the cud. Here is the corresponding propaganda strike. According to the blogger, "funny" when attention is focused "on every little thing." On the other hand, “it’s not funny anymore, it’s absurd and crosses the line” when you need to write all 135 comments about chewing gum ...

Burckhard said that there are teams on Facebook and other social networks working in the building. The building has “about 40 rooms, each has about 20 people, and each of them has its own task. They write and write all day, and this is not a joke: you can be fired for laughing. And so every day ... "Anyone can become the object of ridicule: Obama, Angela Merkel and other news characters.

“Even a political scientist is not able to be an expert, to know everything about the whole world, however, people are expected here to write about everything,” says the former commentator. - As you write, does not matter. You can praise or scold. You just have to use these keywords. ”

“I decided that I could not participate in this ridiculous absurd work. This is all absurd. I do not share this ideology, I am totally against it. I was in the camp of the enemy ... ”The blogger decided that even money does not play a role:“ this is such hard work ”that it’s better to“ just forget ”along with the money. The main thing is that no one forces him to “go there more”.

Of course, история Marat circulates outside the English-language press. Moreover, the original source is Radio Liberty, which also broadcasts in Russian. You can listen to the Russian-language story of a blogger, for example, on the radio site "Freedom" (audio option).

There, in particular, Marat openly admits that he is “a man of pro-Western views.” He also noted that the salary of forty-five thousand is given to the employee "immediately." "This is a real factory, a factory where production standards exist ..."

The blogger explained the division of labor technology at the “factory”: in the 4-storey building there are news departments, there are departments where they create demotivators, where they work with video novelties, there is a department of English-language commentators — they “bombard CNN or BBC -si ", and even the" New York Times "(for those who write in English, the salary is" already higher, not 45000, but 65000 "). Marat didn’t see everything, because “no one darting around especially in the cabinets”.

According to the blogger, the amount of comment should not be less than 200 characters. It is necessary to change the whole shift "scribbling, scribbling and scribbling", "there is no time to talk." It seems to Marat that “real people do not read it at all,” and the conversation is led by “our trochki” (i.e., three employees: a “villain” and a couple against him).

“Your department was called the“ Forums and Blogs Department, ”the correspondent says. “That is, they created, among other things, fake blogs with fake bloggers, right?”

Immediately follows the answer - as if to a hint: “Yes, yes, yes. Fake bloggers, everything is fake ... Yeah. "

He told the former factory worker about the ridiculous case: he was “called to the carpet” because together with the caricatures of Poroshenko he put in a comment a caricature of ... Yanukovych.

There is at the "factory" and the authorities, whose task - "read nonsense." The bosses salary - 70-80 thousand; The blogger claims to have seen the financial statement.

Burkhard's persona does not give rest to Radio Liberty. In addition to the radio program, a text was prepared for the site ( link). With a surprisingly blurred photo of a blogger and screenshots from some desert forums that are clearly not visited by real readers.

In fact, the existence of an army of paid commentators would be good news for Russia. Propaganda is needed. At least in response to the propaganda of the West and all sorts of Ukrainian “censors” there. It is entirely conceivable that such people would act on the pages of CNN, the New York Times, Russian forums, and social networks, starting, of course, with the super-popular Facebook, where the number of inhabitants has stepped over a billion (1,32 billion users in 2014).

Is there a mysterious center in St. Petersburg? Hardly. In any case, the methods of his work described by the British media cause distrust. Firstly, the work could well be remote, and secondly, 12 hours of continuous work - a real torture. Therefore we allow ourselves to doubt all this. In addition, everything that is known about blogger M. Burkhard fits, apparently, on the Afisha portal ( link). 40 years, Moscow. Not St. Petersburg, by the way. Same name? Rather, a fictional character, tailored to a real person (or a pseudonym). And on this media character, new technologies of Western propaganda are being run in, which has decided to portray the successfully functioning Orwellian Ministry of Truth in Russia.

Some doubts are caused by numbers from the “factory”: 135 comments per day. Suppose a team of three people creates 135 + 135 + 135 comments per shift. And against two “pro-Putin” fighters (270 reviews), a “villain” plays, creating negative 135 comments. Approximately two dozen commentators for one room of the “four-story building”, of which one-third of the “villains” will have to fold, will create an insignificant number of reviews per shift in the Russian-speaking segment of the Internet. Rooms around 40. If these “bloggers” are really trying to cover not only the Russian Internet, but also the western one, then their activity is a drop in the ocean.

On any major popular site to one news per day, readers write on 50, 100, and even on 200-300 comments. To one! It's about real readers, long registered on the site, not about trolls. Dozens and dozens of articles appear on the site per day. Therefore, the scale of the activities described by "Freedom" "trolls" are not impressive. The scheme of their work does not inspire confidence either. It would be much easier for Kremlin propagandists to hire an entire army of remote workers who would write and get tired less, but they would take quantity. And it would not be necessary to use the building and equipment - “trolls” would simply be hired through content exchange networks. And many would be happy to work thousands for 15-20. And not at all for 45.

The task of “Freedom” and “former employee of the factory”, we think, is to create among the masses the impression that all the “pro-Putin” materials are an exclusively customized product, but in reality the people of Putin do not support. The task is clear, but to solve it with triple assesses of the interviewee and fantasies about the gloomy Orwellian institutions will fail. Thinner need to act smarter. Otherwise, the materials of "Freedom" and "Independent" will be of interest only in Britain.

Is Putin's high rating or mass voting for Putin in the 2012 presidential election of the year - also the work of the "trolls"? We dare to suggest that this is the choice of the people.

But what choice did the "troll" who appeared on the "factory" praise Putin, but calling himself a "man of pro-Western views"? Two months to write eulogies to Putin - is this the way of all liberals today?