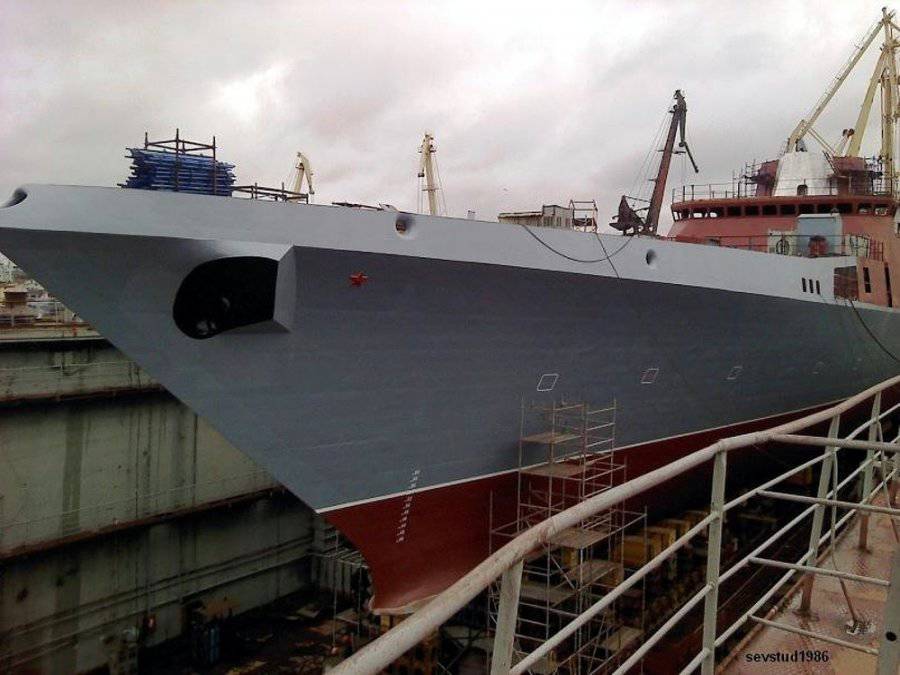 While the near-fleet public is arguing about the feasibility and benefits of landing ships of the Mistral type, while their production is being prepared, ships of another class are quietly, peacefully and calmly built at the Severnaya Verf factory in St. Petersburg.

Not everything, however, in the fate of this technique was smooth. Research on the appearance of the new guard ships began in the middle of the 70 of the last century. According to the results of the research, the requirements for the new ship, which received the designation “Project 11540” or “Hawk”, were formulated. In 1981, the Zelenodolsk PKB began the development of a new patrolman, and five years later the first ship of the series, the Fearless, was laid. Construction lasted more than four years, and he entered the system only in 93-m. Troubled times began for the defense industry, and the second project guard - “Unapproachable”, being laid down in 89, entered service only after 20 years under the name “Yaroslav the Wise”. The third frigate of the 11540 project (“Fog”) has been built since 93. 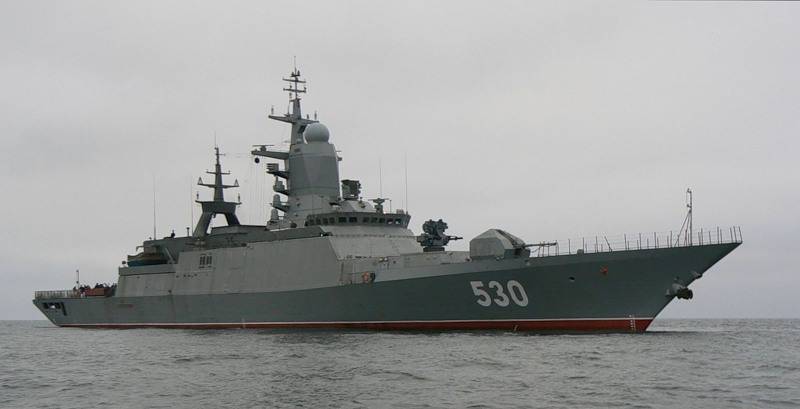 Simultaneously with the Zelenodolsk designers, work began on a promising watchman in the Northern PKB (Leningrad). In the middle of 80's, the Leningrad Design Bureau is assigned to develop a ship with a modular weapon system. To carry this ship - the 13040 project - was supposed to be anti-ship and anti-aircraft missiles, one 130 caliber mm gun and a helicopter. But the construction of the frigate "13040" has not begun, it was not even originally planned. Nevertheless, the developments under the project did not disappear and became the basis of the new patrol.

At the end of the 80s, the Navy’s leadership and a number of leading research institutes formed a requirement for new patrol ships designed to replace the existing ones and be in service until at least 2010-2020's. But after the collapse of the Soviet Union, major financing problems began and all the work on new ships, to put it mildly, dragged out.

Already in the new Russia, the Almaz Design Bureau is creating a new patrol boat based on a missile boat, project 1244, which fully meets the requirements fleet - pr. 12441. Even a frigate was built under the name Novik, but the fleet has not received a finished ship so far.

In turn, the Northern PKB was also not idle, and at the beginning of 2000-s presented a draft version of the 22350 project. And in 2005, the project is approved, a tender for construction is announced and a plant is selected, which will build new frigates - OJSC Severnaya Verf (St. Petersburg).
The lead ship received the name "Admiral of the Fleet of the Soviet Union Gorshkov" and was laid 1 February 2006 of the year. Later, in the fall of 2009, construction began on the second ship of the series, called the Admiral of the Kasaton fleet. At the time of this writing, “Admiral Gorshkov” has already been launched (autumn 2010), while the “Admiral Kasatonov” has completed the building and is installing internal equipment. 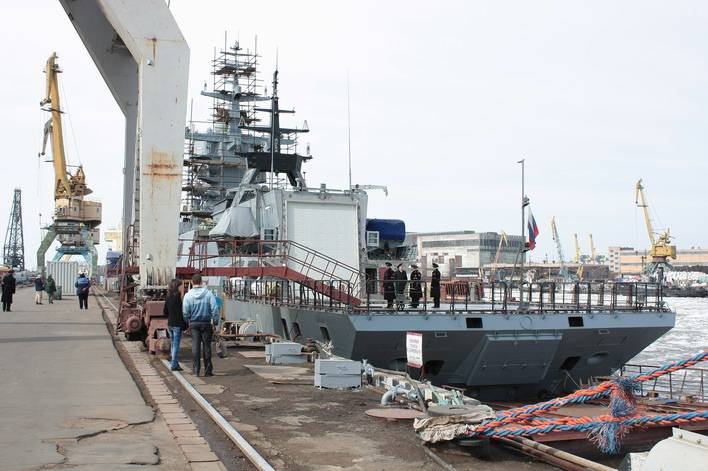 Initially, the Russian Ministry of Defense planned to build 5-6 22350 frigates, but later plans were increased to 9 units. It is planned that the entire series will be commissioned before the 2020 year.

However, not everything is so rosy - a number of experts believe that the planned deadlines for the “Gorshkov” (2012 year) can move. The expert of the magazine “National Defense” I. Korotchenko, in particular, believes that the main reason for this is the difficulty in mastering the production of electronic equipment of the frigate. In addition, representatives of the "Northern Shipyard" talk about the problems with the financing of construction, which also cannot positively affect the timing.

In this situation, statements by the Minister of Defense and the President of Russia about the impending increase in the financing of the defense industry complex are sounding encouraging. But, in general, as they say, wait and see.

Consider the ship itself project 22350

The hull of the first serial frigate, developed after the collapse of the USSR, is made with a semi-pack diagram. Superstructure - solid. To reduce the radar visibility of the ship all the missile weapons are hidden in the hull, the superstructure has specific contours and has in its design a large number of composite materials. The hull of the frigate has a sharp stem and aft end of the transom type, which improves the seaworthiness. Almost the entire length of the ship has a double bottom. In the stern of the frigate are a hangar and a helipad. Full displacement - 4500 tons.

The power plant of the project 22350 - combined. Contains two diesel 10Д49 5200 HP and two gas turbine engines MXNUMFF (90x2 hp). Four engines accelerate the frigate to 27500 nodes. When only diesel engines work, the speed is about 29-15 knots.
On the ship, pitching callers of a new design are installed, which allows the use of armament without any restrictions in case of agitation up to 4-5 points.

The armament includes:
AU-192 single-barreled artillery installation of caliber 130 mm, equipped with a Puma fire control system. The maximum firing range of the installation - 22 km. Different types of shells allow you to hit surface, coastal and aerial targets.
Two universal launchers ЗС14У1 for 8 of Onyx, Brahmos or Caliber-NKE anti-ship missiles.
Two launchers "Medvedka-2" on 4 anti-submarine missiles in each.
The “Shtil” air defense system or in the “Polyment-Redut” perspective. Depending on the type of missile, ammunition ranges from 32 to 128 units.
At the stern, next to the helipad, two air defense missile-and-artillery installations of the “Palash” type are installed.

Electronic equipment of the frigate:
Radar general review.
4 Phased Polymer grilles, designed primarily for use in the air defense of the ship.
To detect underwater targets, the 22350 frigates have the Zarya-M hydroacoustic complex, and in the future, the Vignette-M system will be installed instead.
Aviation the frigate’s armament is a Ka-27 helicopter with all the range of weapons available to it.
The watchdog crew is up to 210 people. Autonomy up to 20 days, range - 4000 miles.
How is the rearmament of the Russian Navy

We are in Yandex Zen
Projects of Soviet aircraft landing ships. Our "Mistral"
Admiral Gorshkov aircraft carriers
2 comments
Information
Dear reader, to leave comments on the publication, you must to register.