March 31 2015
35
American historian Stephen Cohen, who specializes in Russia, believes that because of the erroneous policies of the last White House administrations, war can begin on the planet. Responsibility for a possible US military confrontation with Russia, the scientist imposes on Washington. The White House is aggressive, the historian believes, while Russia is forced to respond to aggression. 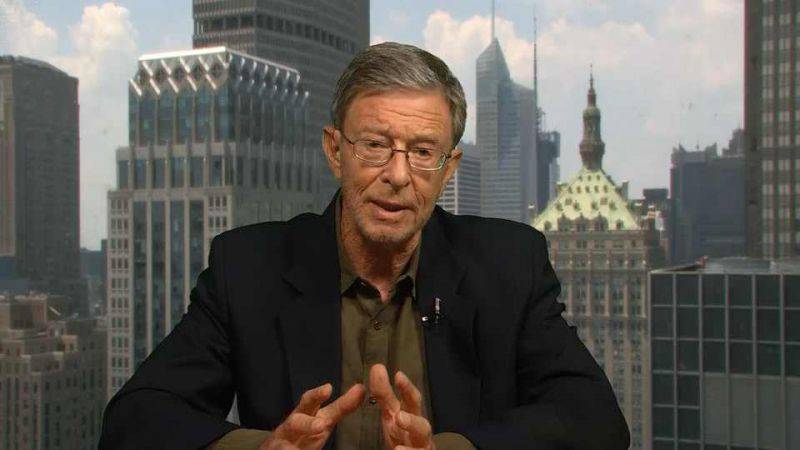 The blogger recalls that Stephen Cohen is a prominent scientist, an expert on Russia, recognized internationally. And it should be alarming that he recognizes the existence of a "real threat of war with Russia."

The historian first speaks about this.

He unambiguously lays the blame for the dangerous tendency on the leadership of the United States, writes Suess.

Finally, according to him, the war "may be the beginning of the end of the so-called Transatlantic Alliance."

According to the scientist, the problem was born in 1990's. At that time, the Clinton administration adopted the doctrine of "The winner takes all." This policy was carried out in relation to post-Soviet Russia. "Russia gives, we take." This policy was adopted by the Clinton administration, but other White House administrations, as well as congressmen, followed it, and there is no difference to which political party the president belonged to and who ran it in Congress. This policy is pursued and President Obama, said Cohen. Any American ruler since the days of Clinton believed that the United States can expand its sphere of influence as much as they want, up to the borders of Russia, but Russia should not have any sphere of influence, even in Georgia or Ukraine.

As for Putin’s figure, the American government does not understand the simple thing: Putin is “more European than 99% of other Russians.”

Regarding Ukraine, Cohen recalls that since November 2013, Putin has not shown aggression, but was forced to respond at every stage.

And what about America? And in the US, the media “uniformly” distorted the facts ”, which the scientist called“ an unprecedented situation in American politics. ” According to experts, it is "extremely dangerous, and it is a failure of American democracy."

In Europe, there was a split. Politicians there have already recognized: Crimea will not return to Ukraine, “no matter how strongly Kiev called for it.”

Further, the historian sharply criticized Obama, noting that he had never before heard from the American presidents in public “personal” remarks against the Russian leaders.

As for the existing government in Ukraine, it is “not a democratic regime.” And if the West does not cease supporting Kiev (without any reservations), then, Cohen said, "I am afraid that we will move towards war with Russia."

“THIS IS YES!” - blogger Süss led in capital letters.

This really proves how alarmed the historian is. If before he condemned mildly, criticizing mainly the "American hawks" climbing on Ukraine, now "he has finally begun to specifically condemn". And both Democrats, Bill Clinton and Barack Obama, got on his black list. Moreover, Cohen has publicly stated that democracy is no longer in the United States.

Why did Cohen not speak with such anxiety about all this before? He told why.

According to him, last year he and other experts believed that Europe, which was economically heavily integrated into Russia, would put an end to this crisis generated by the policy of the United States. “But instead, most of the EU countries went the course of Washington,” the historian noted with bitterness.

In other words, Suess comments, Cohen and his friends apparently ignored evidence of Obama’s atrocities, the White House’s involvement in the Ukrainian coup (this was the first step to conquering Russia), and the Nazi activities in Ukraine — the very Nazis who fanatically hate Russians and wish them death. "

In his speech, Mr. Cohen also noted that Obama is “a weak leader in foreign policy.” Süss believes that such a statement looks like an explanation for the unsuccessful Hitler’s decisions by D. Irving, who claimed that Hitler was “the weak leader that his advisers used”. Cohen and, possibly, his friends, writes Suess, are similarly judged the same way about Obama: they refuse to consider the evidence of the evilness of this person.

But now, after this interview, the blogger continues, people may open their eyes to what is happening. Americans finally realize how close the world has come to a nuclear disaster. Liberals do not even have time to suffer, do not have time to be disappointed in the world in which they lived.

Liberals are not able to protect the world from the Nazis, they always fail, according to Süss. But those progressive personalities who are aware of the depth of real problems are somehow called liberals by the liberals ...

By the way, most recently, 25 March in Washington hosted the World Russian Forum. Politicians did not make speeches about the exclusivity of the United States, about Russia's aggression and even about strengthening sanctions or any other pressure.

As told correspondent "Vesti" Alexander Khristenko, the event was held in the building of the Senate. It is in this room that John McCain usually sits. But March 25 said there was not Russia, but America provoked a conflict in Ukraine.

"News" quoted the same Cohen, who participated in the forum:

“Almost 25 for years in Washington perceived post-Soviet Russia as a defeated country. They did not say this out loud, but they were treated as a defeated Germany or Japan. Three leaders — Gorbachev, Reagan, then Bush Sr. — negotiated, announced in 1988 that the cold war was over “without losers.” All won, no one lost. The USSR broke up later, but America connected this event with the already ended cold war. And soon, in January, 1992, the president of the elder Bush announced that the United States had won the cold war, moreover, “the only superpower in the world remained - the United States of America”.

According to Cohen, triumphalism has eaten into US foreign policy. Hence the attempt to impose unequal conditions in relations with Russia: Moscow must yield “thanks”.

There was talk about the expansion of NATO. The correspondent cites the words of Theodore Postol, a professor at the Massachusetts Institute of Technology. “I somehow understand Russians that they are worried about being surrounded by NATO countries,” he said. - I, an American, would not tolerate it if Russia tried to do the same with the United States. I speak as a person who was involved in military planning. In this case, I would advise my political leadership not to allow this. Why should the Russians put up with this? .. ”Postol, who had previously served as adviser to the chief of staff of the US Navy, is convinced: it is extremely dangerous to build up the points of contact between the military capabilities of the two states.

So, in the US, the number of progressive-minded comrades is growing, not wishing to allow not only wars between the USA and Russia, but even the very thought about it. Another question is whether Mr. Obama will hear their calls, a man whom other American journalists call "evil"? And one more question: will Obama back off or will he drag a bagpipe with sanctions until the end of the presidency? After all, admitting mistakes is painfully difficult. Especially those who committed himself, and not allowed the previous Republican administration!