March 30 2015
85
Some Western analysts give gloomy forecasts for Russia: the country's economy is “burned out” from sanctions, in some regions people stopped paying salaries, factories are closing, workers' strikes are about to begin, they have already taken to the streets with protests. Other experts, on the contrary, declare that “the period of panic” is behind Moscow, there is no sense to the West, but there is a benefit to its geopolitical opponent: having understood who its real enemy is, the Russian people consolidated. 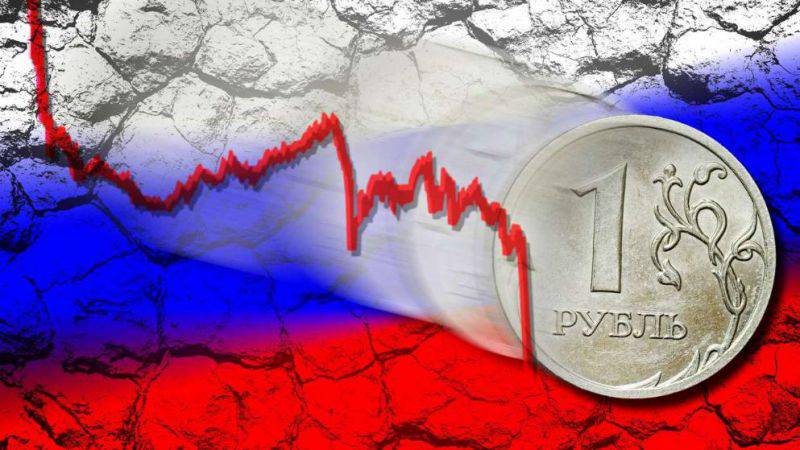 Collage from the German tabloid "Bild"

In the German newspaper "Bild" An article was published entitled “So abgebrannt ist Putinland” (“This is how Putin’s country got burned”).

The German tabloid, which collected data from some “regional mass media” of Russia (“FlashNord”, Vologda publications, as well as the central Moscow agency RBC), concluded: the ruble fell, the prices for food and equipment increased, and now problems have been added to this sad list with non-payment of salaries in the regions. More precisely, with delays in payments.

For example, they did not receive a teacher’s salary in the Murmansk region. The newspaper reports that teachers usually give money to teachers between 19 and 22 on the dates of the month, but did not give out money in March. Officials from the regional education committee told citizens about the reduction of state subsidies for the region. The first deputy chairman of the State Duma Committee on Education, Vladimir Burmatov, has already responded. “There can be no talk of any delay in salaries,” the publication quotes.

In Ufa, in the meantime, protests of doctors, including ambulance employees, took place. Why are they protesting? It turns out that in 2015 about a hundred and fifty Ambulance workers were fired in the city. The rest have to work hard for two. Patients also suffer, because, according to one nurse, patients have to wait for the brigade "for 5 hours."

German tabloid cited data and Rosstat. The newspaper writes that for the first time since 2000, the level of real wages in Russia has decreased. In November last year, the reduction was expressed in the figure of 3,9%, and in December it already reached 7,3%.

And here is the analysis of the expert. As noted by an economist from RBC I. Nikolaev, in the event that "the reduction in wages continues at the current pace, it will be felt by the majority of the population." The expert believes that the reduction of the salary level in the current year will amount to 10%.

Ten percent? Ironically, the publication writes about how the President and the Prime Minister connected to the sufferings of their people. “Bild” informs its readers that as a sign of solidarity with the citizens of the country, Vladimir Putin in early March cut the salary not only for himself, but also for Dmitry Medvedev, by 10%.

“Bild” admits that the president will not even notice such a reduction, since “he owns a huge fortune”. “Real estate, cars, expensive watches, foreign accounts”, owned by Putin, were rated by journalists as “billions”.

A different assessment of Russia's position is given in the article by Leonid Bershidsky («Bloomberg»). Bershidsky is not at all inclined to utter Putin's panegyrics, therefore his passages that the panic in Russia has passed are particularly interesting.

The analyst recalls that for the first time since July 2014, last week, foreign exchange reserves of the Central Bank of the Russian Federation increased. And this shows that the Russian economy probably left behind a period of “panic” caused by falling oil prices. The journalist believes that improving the performance of the Russian economy will convince Western governments that economic sanctions have not had a significant impact on the "regime of President Vladimir Putin." In addition, these indicators will make them understand that Russia "is not threatened by inevitable collapse."

The reviewer also recalls that the United States owes Russia a fairly large amount. In January, 2014, Russia held US treasury bonds worth 131,8 billion. After the “revolution in Ukraine and the annexation of the Crimea,” relations with the United States deteriorated with Russia, and it began to reduce its dollar reserves, simultaneously increasing the share of euro and gold. In 2014, stocks as a whole declined by 23,9%, and stocks expressed in US debt securities fell by 37,6% to 82,2 billion. And now Russia has less US Treasury obligations than Ireland, Turkey or Singapore.

In recent days, a new trend has developed: the ruble has become stronger. The central bank of the Russian Federation no longer needs to throw currency into the market in order to support the ruble.

The price of oil, too, "came back to normal."

Finally, in Russia, the interest rate was reduced from 17 to 14 percent, which increased the attractiveness of the economy for currency traders (although risks still exist).

The analyst recalls past forecasts of world experts. He writes that many of the unfavorable forecasts for the Russian economy (like the one that Anders Aslund of the Peterson Institute issued a month ago) were built on the rapid "melting" of the Central Bank's foreign exchange reserves. A. Aslund even wrote about “approaching the critical limit.”

As for oil, market analysts forecast prices in a very wide range - from $ 50 to $ 90 per barrel of Brent (forecast for the fourth quarter). A consensus forecast, compiled by Bloomberg, determined the future price of $ 68,65 per barrel.

Economists at Goldman Sachs do not believe that the Russian economy will fall by more than 2015 percent in the 2,7 year.

No, there is nothing good in this indicator, it is “painful” for Russia, writes Bershidsky. However, what did the West achieve with its sanctions? Almost nothing. Yes, the Russians suffered from the events in the oil and foreign exchange markets, but restrictions on trade and finance created only "inconvenience for a number of Russian companies." Meanwhile, Sberbank, this “giant state institution” that cannot receive funding from the West, still has a large annual profit ($ 7,7 billion for 2014 a year). Yes, this is less than a year earlier, but there is no need to talk about the “tragedy”.

The analyst pays tribute to "business executives of Russia" - especially those who work in the Central Bank and the Ministry of Finance. In his opinion, these people “should be given their due”: under difficult conditions, they managed to “avoid major mistakes” and even retained the “openness of the Russian economy.” Putin has “many advisers,” recalls the author of the material, who “would prefer a different approach,” but the president “made a wise choice.” And the Russian economy has remained a market and strong enough, which is not afraid of "several small restrictions."

All this creates a "big threat to the weak neighbors" of Russia (like Ukraine). At the same time, Russia is a land of undervalued opportunities.

And not easy in the 2015 year, after conducting a survey among investors, the CFA Institute (International Association of Investment Professionals) reported that Russia, along with the United States, China and India, is “one of the best markets in terms of investment attractiveness”.

On an international resource Project Syndicate 28 March, an article by Andrei Kolesnikov.

The author of the article is the head of the Russian Domestic Politics and Political Institutions program at the Carnegie Moscow Center. He also collaborates with the E. Gaidar Economic Policy Institute, is a member of the board of the Gaidar Foundation and a member of the Committee for Civil Initiatives (Alexey Kudrin Committee), writes for Vedomosti, Gazeta.Ru, Forbes.ru (source).

According to the expert, outlined on the pages of the Project Syndicate, the Western approach to Russia is based on the assumption of concessions that President Putin’s regime will take if pressure continues. “Nothing can be further from the truth,” the analyst believes.

The premise on which Western sanctions are based is the conventional wisdom about the sharp deterioration in the economic situation in Russia, as a result of which the Russian public, in particular, the financial and political elite, will rally in the fight against the Kremlin. As a result, Putin will not be able to resist the disagreement of the rich class, as well as the growing middle class. Western support for Ukraine will also serve as a signal for Russian citizens: Russian mothers will not want to send "their boys to die in the Donbass." Under such pressure “from above and from below”, the Kremlin allegedly changes its policy and even “starts democratization.”

Western politicians do not understand that such a scenario is less likely, the analyst writes. Quite the contrary: public opinion polls show that Russians perceive pressure from the West and sanctions not as pressure on Putin and his boyfriends, but on the whole of Russia. The Russian middle class poses no threat to Putin at all, since these “20-30% of the population” have recently acquired wealth due to high oil prices and economic recovery processes in the 2000s. These people are "loyal to the Putin regime."

Will the West want to increase pressure? The more the West will put pressure, the less likely the effectiveness of sanctions!

It seems, let us add from ourselves, already the critics of the “Putin regime”, including well-known liberals, have started talking about the senselessness and dead-end nature of Western sanctions. If Washington achieved something in its “crusade” against Moscow, it was consolidation of the Russian people and the final separation of Russia from political “reorganization” according to the canons of the West. If under Gorbachev many Soviet people believed in “perestroika”, “democratization” and “good of the West”, today, a quarter of a century later, there are almost no naive people left. The West really does have some benefits, but he never intended to share them with Russia.

Ctrl Enter
Noticed a mistake Highlight text and press. Ctrl + Enter
We are
This is not “Putin’s Russia” - this is “Putin-Russia”Results of the week. “Ta-ak. Hence, we know the Russian language. Why was it necessary to hide? ”
85 comments
Information
Dear reader, to leave comments on the publication, you must to register.