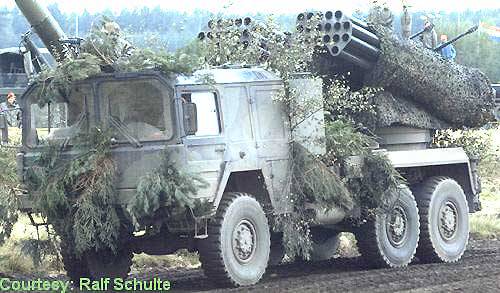 The rocket launcher system (MLRS) "Lars-2" (Leichtes Artillerie-Raketen-System) is designed to destroy the advanced calculations of military equipment, the dispersed enemy manpower, artillery calculations and remote mining of the terrain.


The Lars-2 system is the result of the implementation of the LARS-1 MLRS modernization program adopted by the Bundeswehr in the 1969 year. From 1980 to 1983, in accordance with this program, all LARS-209 launchers in service with the Bundeswehr 1 were upgraded.

A wide range of ammunition, including projectiles and submunitions of high-explosive fragmentation, fragmentation, cumulative and smoke, mines for anti-tank and anti-personnel mining areas provide for the destruction of various types of targets - manpower, armored vehicles, fortifications and command and control troops.

The plans of the Bundeswehr command provide for the gradual replacement of these installations by MLRS systems. Deactivated installations of LARS-2 are transferred to the armed forces of Greece and Turkey.

Composition:
The upgrade primarily affected the launcher. The wheeled chassis of the outdated "Magirus-Deutz" truck was replaced with the chassis of the MAN high-performance car, in a multi-seat cab of which the crew and fire control equipment are located. Engine - diesel MAN power 260 l. with. The chassis is made according to the wheel formula bhb and is equipped with a centralized system for regulating the air pressure in the tires.

The artillery unit, which consists of two armored 18 packs of trunks in each, is mounted on a circular rotation platform above the rear axles of the chassis. In the vertical plane, missiles can be aimed at a target in the range of angles from 0 ° to + 50 °. Guidance is carried out by the gunner, whose place is between the packages of trunks. The stability of the launcher during firing is ensured by means of two hydraulic jacks, on which the stern of the chassis is hung when the unit is placed in a firing position.

Firing can be conducted 110mm unguided projectiles (NUR), included in the ammunition MLRS LARS-1, as well as improved NUR with a firing range of 25 km, for which new head units were developed:


On the launcher, REPAG equipment was also installed, designed to test missiles, set the response time of the warhead fuse and select the launch mode.

The launcher can climb up to 30 °, has good cross-country maneuverability. Without prior preparation, it can force a ford with a depth of 1,2 m. The equipment includes radio communications, navigation equipment and fire extinguishing equipment.