The financial world has changed in a week

March 27 2015
53
Last week there were two major events in the field of international finance. At first glance, they are completely unrelated. But this is only the first. The financial world has changed in a week. The Bretton Woods world, founded by the Anglo-Saxons on the domination of the dollar, took another very significant step towards the end of its existence. 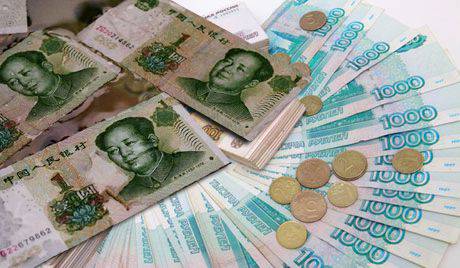 Before we talk about these two events, we need to mention another one, which is a definite background for what is happening. Or the foundation - here as someone more like.

For several months in a row, in the information space, there was a question about a possible disconnection of Russia from the western payment banking system SWIFT. Through it today passes the vast majority of financial transactions in the world. The main SWIFT center is located in Brussels, but is under US control.

The result of US pressure on Russia is the accelerated launch of a similar payment system by China by the end of 2015.

“According to Reuters, the China International Payment System (CIPS), which serves to handle cross-border transactions in RMB, is ready and can be launched in September or October of this year. This will eliminate one of the biggest obstacles to the internationalization of the yuan. This should significantly increase the international use of Chinese currency by reducing transaction costs and payment processing time. ”

A circulatory payment and transaction system will be built by China by the end of 2015.

Now it’s up to the issuing center, which will create money, the “blood of the economy”, so that it flows through the new payment system.

And this emission center has already been created.

This Chinese alternative to the World Bank is called the Asian Infrastructure Investment Bank (AIIB).

On the eve of France, Germany and Italy agreed to join the Asian Infrastructure Investment Bank (ABII), writes the Financial Times, citing its sources in diplomatic circles. According to the American media, this greatly changes the balance of power in the growing confrontation between the United States and China over who will establish economic and trade rules in Asia. ” http://rusplt.ru/world/velikobritaniya-pozvala-vseh-v-aziatskiy-bank-16011.html

AIIB was established in November 2014 by the initiative of China “to finance infrastructure projects in the Asia-Pacific region”. Four months have passed and the United Kingdom and other Western countries are joining this Chinese project.

This means - it is impossible to ignore. Therefore it is better to cooperate. Britain is not just the closest ally of the United States. This brain - States torso. And the brain of the modern financial system today considers it a blessing to enter the project, alternative to its monopoly.

Let's sum up the intermediate result.

China made decisive moves in the financial sector. Russia supports China in this movement. The West, having failed to blow up Russia from the inside or by drawing it into a war in Ukraine, destabilize the Eurasian space, in order to weaken China, is forced to negotiate with Beijing.

Does this mean that the struggle is over? Of course not. The fight is endless. And the West will also try to pit Russia and China many times between themselves. But not yet. We have to negotiate with Beijing.

And now back to two newswith which we began our analysis of the situation.

20 March 2015, the presidents of Russia, Kazakhstan and Belarus discussed “how to overcome the crisis phenomena in the economies of the countries of the Customs Union, how to raise mutual trade and when to switch to a single currency.

The proposed altyn as a way of calculation is still only at the discussion stage, since there is no decision on where to print and how to regulate its volumes ”. http://www.1tv.ru/news/polit/280224

Meanwhile, a few months ago, they also called the terms quite different - 2025 year. http://expert.ru/2014/09/10/evrazijskij-soyuz-sozdaet-obschuyu-finansovuyu-sistemu/

And now this “acceleration” for ten years. Why? And because the financial world is changing very quickly. And the fact that the Eurasian Union planned in a very distant future can now (and should) be done immediately. After all, the Chinese partners have created an emission center and are about to launch a payment system. And where it is more convenient to approach the work under the new rules with ONE currency, rather than with three or more.

It is curious that on the eve of a trip to Astana and statements on a single financial system and a single currency of the Eurasian Union, the Russian president met in Moscow with a high-ranking Chinese comrade: “Vladimir Putin received in the Kremlin the head of the office of the Central Committee of the Chinese Communist Party, Li Zhanshu.” http://www.kremlin.ru/news/47887

The system for determining the price of gold in the world is changing.

“Starting from 1919 to the present, the so-called London Gold Fix system operated on the precious metal market - a pricing system that set a certain average price twice a day and the process was administered by London Gold Market Fixing Ltd. Experts believe that this will not be just some kind of trivial technical change, it will be a real turning point in stories gold And this is why: London Gold Fix, which will cease to exist on Thursday, allowed only four participants to set the price of gold, which, of course, made it possible to carry out the necessary manipulations. This system will be replaced by a specially designed auction, it will be as transparent as possible, and as many participants as possible will be allowed to it. ” http://www.vestifinance.ru/articles/54704

It's funny, really. The system for determining FOUR people twice the price of gold (about which I wrote in detail in the book “Cherche la oil”) worked for almost a hundred years. And no “violations” in it, no one saw. Did not criticize. And then “suddenly” - they saw ...

“Many note that the decision to form a new pricing method was made in view of criticism from many economists and market participants, as well as investigating the facts of fraud in various markets, which regulators are conducting.

According to many experts, in its current form, the pricing method is outdated and "vulnerable to manipulation." http://vkurse.ua/business/sobirayutsya-izmenit-cenoobrazovanie-na-zoloto.html?top-rotate

How does the system change? Monopoly, of course, the Anglo-Saxons, are not going to destroy. There will be no transparent auction, as there was not one hundred years before. The British simply include Chinese banks in the gold pricing system. Why? And this is a fee, a reciprocal “request” for the inclusion of the UK in the very Chinese Asian Infrastructure Investment Bank and in the future to the Chinese payment system.

“As we have said, experts expect that in the new conditions, China’s role in pricing will be much higher and become more transparent. This innovation opens up the playing field for gold trading and adds a completely new range of opportunities and participants, especially for the Chinese, "said Market Watch Kevin Kerr, President of Kerr Trading International.

Now everyone is talking about the huge demand for gold from China, but no one knows the real numbers, because the authorities of the Middle Kingdom carefully hide them. So, Mr. Kerr is sure that in the new conditions the veil of secrecy will be slightly opened.

The London Association of Precious Metals Market Participants (LBMA) promised not to disclose the names of bidders until the launch of the new system, but if Chinese banks are directly involved in the fixing process, they will be able to conduct arbitrage transactions between Shanghai and gold, making it essentially round the clock international market. This opinion was expressed by Julian Phillips, the founder of GoldForecaster.com. ” http://www.vestifinance.ru/articles/54704

Especially a lot of all these news is not told. Meanwhile, these are all real signs of a serious weakening of the dollar monopoly, and in general, the Anglo-Saxon monopoly on the global financial system.