Will Russia try to get Estonia, Latvia and Lithuania? ("The Financial Times", UK) 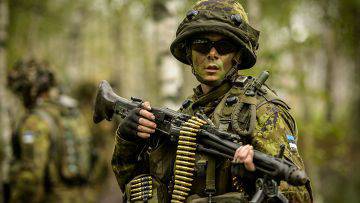 After Russia annexed the Crimea and destabilized the situation in the east of Ukraine, military confrontation between Moscow and the West over the Baltic countries became quite possible. Under what circumstances can it begin? How could such a conflict develop, and what could happen after the end of such a war?


Such a large-scale war in Europe - even without a nuclear component - would have shook the whole world, threatening to turn the whole world order that had taken shape after the Cold War. If the North Atlantic Treaty Organization (NATO) could not defend the Baltic countries or lose to Russia, this would destabilize Asia and the Middle East, as doubts about the reliability of the United States as an ally would increase. And this would lead to even greater destabilization of the geopolitical climate, as it was in the 1930-s.

It is highly doubtful that Russia is seeking a conflict with the West, therefore any action against the Baltic countries would be the result of a miscalculation on its part. The conflict in Ukraine has shown that Russia increasingly perceives the poor position (true or imaginary) of ethnic Russians abroad as a possible reason for the invasion of neighboring states. Ethnic Russians make up a quarter of the Baltic population. Many thousands of ethnic Russians were denied citizenship. Therefore, in the Baltic countries there are serious concerns about possible military intervention by Russia.

How can a conflict start?

Fierce clashes between local nationalists and ethnic Russians, the adoption of laws that lower the status of ethnic Russians, a skirmish between border guards, or a confrontation between Russian and NATO, could be possible reasons that could provoke Russian intervention. aviation in midair over the Baltic Sea.

1) Hidden attempts to destabilize: The Kremlin is accused of provoking unrest between pro-Russian separatists and non-Russian people in eastern Ukraine, sending professional soldiers and special services to command pro-Russian forces, supplying separatists weapons and organizing their training. There are suggestions that several thousand servicemen were sent to the conflict zone to accomplish these goals. 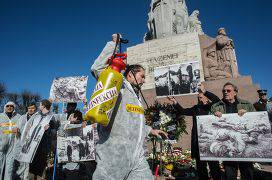 It is quite admissible that Russia could try to repeat such actions in the Baltic countries and after several months of military clashes to demand settlement of the conflict with the help of a settlement agreement, which would give ethnic Russians more authority in resolving issues of domestic and foreign policy of Estonia, Latvia and Lithuania. Or she could place a small "peacekeeping" contingent to restore order.

2) Rapid occupation: As an option, Russia could seize the Baltic states in a rapid operation, possible given the small number of armed forces in these countries. However, a “sudden” seizure is unlikely, since Russia would have to by all means look for an excuse for its actions. A less rigid variant of this scenario would be the transfer of Russian troops on the territory of Estonia and Latvia, located closer to the Russian border, where a large part of ethnic Russians live. Or capture the most important infrastructure - ports, airports and railways.

How would the West react?

Russia's actions against the Baltic countries would be the most serious foreign policy crisis in the last few decades for the United States and Europe, since they are obliged to protect NATO countries.

Here is what the Article 5 of the North Atlantic Treaty of 1949 says: “Contracting Parties agree that an armed attack on one or more of them in Europe or North America will be considered as an attack on them as a whole and, therefore, agree that if such an armed attack takes place, each of them, in the exercise of the right to individual or collective self-defense, recognized by Article 51 of the United Nations Charter, will be assisted by the Treaty vayuscheysya Party affected or the Contracting Parties, have been subjected to similar attacks by the immediate implementation of such individual or joint action as it deems necessary, including the use of armed force, to restore and maintain the security of the North Atlantic area. "

True, it is likely that not everyone will immediately perceive the hidden actions of Russia in destabilizing the situation as an “armed attack”. In addition, the concept of “action that deems necessary” does not guarantee a response with the use of armed forces. Thus, it is possible that the strategic leadership of NATO would start by resorting to sanctions and diplomatic steps. And, nevertheless, given that the majority of NATO members understand Article 5 as a full-fledged security guarantee, any failure of the alliance from its obligations and the actions expected from them would significantly undermine its credibility.

From the standpoint of NATO, it would be more expedient to deploy troops in the Baltic countries at the very first signs of inter-ethnic destabilization and prevent Russia from escalating any unrest or sending its own troops.

Although Russia's offensive on the Baltic countries would be a clear act of aggression, I could assume that military actions in many Western countries would cause considerable resistance because of the danger of the use of nuclear weapons by the parties or, at least, because of the occurrence of a full-scale non-nuclear war. Thus, NATO might have had to convene a “Goodwill Coalition” (international coalition troops - approx. Transl.), In which the United States should have been present, despite the exhaustion of their troops in the battles in Afghanistan and Iraq.

How would this war go? 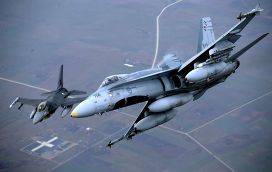 I think that the leading members of NATO would eventually enter the war in order to halt Russia's military actions in the Baltic countries. However, the main question is whether Russia and NATO would be able to limit themselves to actions on the territory of the Baltic countries. Perhaps Russia would have attacked Poland or captured the island of Gotland belonging to Sweden in the Baltic Sea, while NATO might have attacked targets in Russia.

The most dangerous would be the use of nuclear weapons. Of course, it is unknown what would be the reason for this, but in any case, operations would be carried out with the use of tactical nuclear weapons (that is, battlefield weapons) rather than strategic ones (which are intended to defeat cities). And even if “only” tactical nuclear weapons were used, this would cause a general panic in the northern hemisphere amid growing concern over a possible escalation and the threat of an exchange of strategic nuclear strikes.

An armed conflict between Russia and the West would be a shock to the world economy as a result of the disruption of the order that developed after the Cold War. The mutual imposition of sanctions, as well as the cessation of air and sea transport in Northern Europe, would have caused tremendous damage to international trade. There would be a sharp jump in oil prices given the fears that the supply of hydrocarbons from Russia would be canceled or disrupted.

The European economy would have suffered significant damage due to the disruption of gas supplies from Russia, especially if it happened in the winter. And Moscow’s actions to reduce energy supplies to Europe would lead to a significant reduction in the volume of revenues to the Russian budget.

What would happen after the war?

In case of victory Russia

Russia's victory over the most powerful military alliance in the world would have prompted some Eastern European countries that are part of the European Union to try to reach an agreement with Moscow. At the same time, Azerbaijan, Kazakhstan and Uzbekistan would most likely agree on the hegemony of Russia in Eurasia. The winning Kremlin could then put pressure on the US and the EU to formally divide Europe into two competing spheres of influence.

Europe would have to tune in to a long-lasting cold war, although it would not be global in scale, since the value of the European economy has declined significantly since the 1980s. In addition, the new confrontation would not have an ideological component.

In other parts of the world, the unreliability of collective security treaties would have pushed Japan and South Korea to build up military power to confront China and North Korea, most likely by building their own nuclear arsenals. Similar trends would be developed in the Middle East, where Saudi Arabia and a number of its neighbors fear Iran’s nuclear program.

The Alliance would demonstrate its unshakable superiority in Europe, despite the reduction in defense spending over the years. The United States would decisively make it clear that they would support their allies, even if it would have to come into conflict with the world nuclear power.

The defeat of Russia would greatly discredit the country's leadership, which would be accused of irresponsibility and incompetence. In all likelihood, the president would have shared the fate of the Argentine military dictator Leopoldo Galtieri (Leopoldo Galtieri), who was removed from his post in 1982 year - a few days after the country was defeated in the Falklands war with Britain.

After that, in 1983, the military regime fell, and as a result of new elections, democracy was restored in the country. The loser Russia would still remain too powerful a power to submit to the West, but its new leaders could try to choose a less confrontational path in the hope that a possible normalization of relations with the United States and the European Union would be a guarantee of Russia's economic revival.

We are in Yandex Zen
Situational analysis of the death of the MH17 flight (Malaysian Boeing 777), made on the basis of engineering analysis from 15.08.2014
Results of the week. “And the Crimea of ​​the Fatherland is sweet and pleasant for us!”
97 comments
Information
Dear reader, to leave comments on the publication, you must to register.