Expert: The United States does not have protection against Russian nuclear strike

March 27 2015
21
Over the past decades, nuclear weapon. According to one of the widespread opinions, it is atomic bombs, rockets and their carriers that keep the leading states of the world from a direct collision. Nuclear weapons are still working to maintain balance in the world, but there are specific problems in this area that need to be considered when creating new strategies. 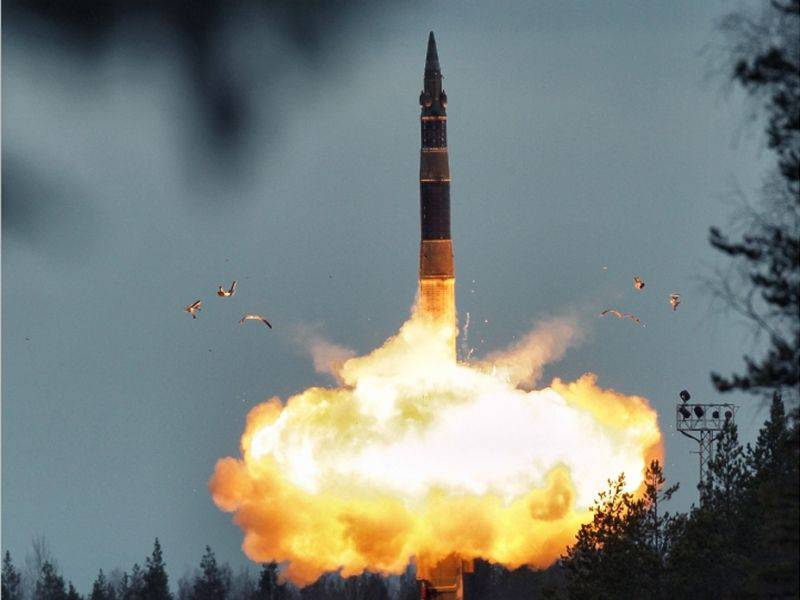 A few days ago on the blog platform of the Forbes publication appeared the article The US Has No Defense Against A Russian Nuclear Attack. Really. (“The United States does not have protection against a Russian nuclear strike. Indeed.”) Authored by international policy and security specialist Lauren Thompson. The author of this publication is concerned about the current situation in the field of nuclear weapons and international relations. In his opinion, official Washington should take measures aimed at preserving the security of the state in changing conditions, taking into account the existing and emerging threats.

L. Thompson begins his article with a reminder of the priorities of the American authorities. Thus, the administration of President Barack Obama proposes to include in the budget for the next fiscal year additional costs to protect against possible threats from Afghanistan, Iraq and other friendly countries. At the suggestion of the leadership of the United States, such costs should be approximately 1 billion dollars a week. These funds are planned to be spent on certain special operations abroad.

Then L. Thompson addresses the security topic of the United States itself. First of all, the question of a hypothetical nuclear missile strike from Russia is raised. Russia, the author recalls, has approximately 1600 nuclear warheads and their means of delivery. Even a small fraction of such an arsenal in the event of an impact can damage the country's energy systems, financial structures, and even the entire economy as a whole. L. Thompson asks the question: how much money does B. Obama's team plan to spend on protecting the US from the Russian nuclear threat?

The author of the article immediately gives the answer: not a cent. Official Washington has no such plans. At the same time, we all know perfectly well that most of the Russian missiles are aimed specifically at objects of the United States. In addition, relations between Russia and the United States are spoiled, which further aggravates the situation in the field of nuclear weapons.

L. Thompson is particularly worried about recent events in the international arena, as well as new information about last year’s events. The author recalls that in the recently shown documentary film on the annexation of the Crimea, Russian President Vladimir Putin spoke about some of the plans and intentions that had existed before. Among other things, the Russian leadership was ready for the worst case scenario, including the possibility of bringing strategic nuclear forces on high alert. At the same time, L. Thompson notes that the exact meaning of the term “increased combat readiness” in the context of Russian nuclear weapons raises certain questions, since it is known that the Russian nuclear forces, even in peacetime, are constantly ready for combat work and fulfillment of orders to strike at the specified targets .

However, in the article The US Has No Defense Against A Russian Nuclear Attack. Really. It is not Russia's intentions that are being considered, but the current situation in the United States. We are talking about the absence of any means of protection against a nuclear missile strike. At the moment, nuclear weapons are the only threat created by man and capable of destroying the United States at any time. L. Thompson proposes to submit to the reader that his friends and relatives were killed or injured, and the survivors were left without shelter and livelihood, and this happens not in the distant future, but tomorrow. Russia, the author recalls, has the opportunity to arrange a similar catastrophe. The United States, in turn, does not have the means of protection against Russian intercontinental ballistic missiles.

This situation does not suit anyone. Throughout stories countries sought to ensure their safety. Thus, the launch of the first artificial satellite of the Earth, made by the USSR in 1957, forced the US military to start building anti-missile defense systems. Nevertheless, the threat from the Soviet Union did not diminish - by the 1970s, the main adversary of the United States had about 40 thousand of different types of nuclear weapons. By this time, Washington had begun not only to develop means of protection, but also to try to slow down the arms race.

L. Thompson recalls that in 1972, two superpowers signed the Treaty on the Limitation of Anti-Ballistic Missile Systems. In fact, Washington had to sacrifice the defense of its country in order to slow down the pace of the arms race. However, such a slowdown did not mean a complete cessation of military buildup. Countries retained the possibility of destroying each other, but did not have a similar desire. It was believed that a potential aggressor, understanding the consequences of a retaliatory strike, would not risk and unleash a nuclear war.

In the future, the two countries agreed to reduce their arsenals. Began utilization of nuclear warheads and their means of delivery. A large number of weapons were removed from weapons, but the overall situation remained the same. Russia, like several decades ago, has the ability to cause unacceptably great damage to the United States. L. Thompson believes that this situation in the international arena will not change in the future. The fact is that Moscow does not trust Washington, and nuclear weapons are still the only available means for it to attain superpower status.

The author of the article The US Has No Defense Against A Russian Nuclear Attack. Really. Recalls that some US leaders, such as President Ronald Reagan, understood the complexity of the situation. The probability of mutual annihilation stopped countries from aggression, but such a system was associated with certain risks. Thus, in the existing situation there were no mechanisms of protection against “irrational” opponents, and besides, the system was not protected from accidents with disastrous consequences. Finally, nuclear weapons could not be used effectively in the event of a malfunction or damage to the control system. At the same time, there was an understanding that during a confrontation, similar to the Caribbean crisis of 1962, there was a high risk of incorrect assessments and decisions that could have the most unpleasant consequences. When nuclear forces are ready for combat, even the best leaders are not immune to mistakes.

When R. Reagan went some work in the field of missile defense, but the end of the Cold War led to the reduction of such projects. It was believed that the collapse of the Soviet Union significantly reduces the possible risks for the United States, because of which you can not spend budget money to develop new, complex and expensive projects. The interest in missile defense was not great until the end of the reign of Bill Clinton. Later, under George W. Bush, the likelihood of the appearance of nuclear weapons in the DPRK became a pretext for the resumption of work. In addition, at the same time the United States withdrew from the ABM Treaty, which did not allow to implement all the existing plans. L. Thompson notes that at that time Russian nuclear weapons were not the main reason for the development of anti-missile systems.

Further, the author examines recent developments in the field of missile defense relating to the period of Barack Obama’s rule. The administration of the latter was of the same opinion as the previous Democratic presidents. A promising missile defense system was called too complicated, extremely expensive and capable of destabilizing the military-political situation in the world. Until last year’s events in Ukraine, official Washington considered it necessary to continue to reduce nuclear arsenals and to support the missile defense system that protects the west coast of the country from possible attacks by North Korea. In the case of Russia, it was considered sufficient to have a certain number of missiles necessary for retaliation and deterrence.

The US continues to hold back Russia with the help of its “nuclear triad” - land-based missiles, submarines and bombers. Russia's strategic nuclear forces are the main threat to US security, and the strategy of deterrence in this case fully justifies itself. However, according to L. Thompson, all existing nuclear arsenals of the United States under certain circumstances may be useless. In the current situation, the US military is unable to intercept Russian intercontinental missiles. Their potential is only enough to strike back, which, however, does not reduce their own losses.

The existing US missile defense system can counter the North Korean threat, since the DPRK does not yet have a large number of missiles. If necessary, it is capable of intercepting Russian missiles, but with a mass launch, Russia is guaranteed to break through all existing lines of defense. Thus, L. Thompson sums up, the United States can detect the launch of Russian missiles and respond with a similar blow, but is unable to protect itself against enemy nuclear warheads.

Such a strategic myopia, according to the author of the publication The US Has No Defense Against the Russian Nuclear Attack. Really, in the end can lead to disastrous consequences. The United States needs an echeloned missile defense system that can counteract Russian ballistic missiles. Such a system should, if not completely destroy all missile strikes, then, at a minimum, prevent damage from a limited strike resulting from any error. L. Thompson believes that such a system should be implemented as a network of land, sea and space tools that can attack the detected targets several times. Thus, with the existence of three echelons with an efficiency of work at the level of 80%, the probability of even a single combat unit breaking through is extremely small.

Lauren Thompson is not the first time raising the issue of protecting the United States from third-party nuclear missiles. As an employee of several scientific organizations, he deals with issues of strategic security and actively supports the idea of ​​building a full-fledged echeloned missile defense system capable of protecting the US territory from nuclear missile strikes.

A characteristic feature of the article The US Has No Defense Against A Russian Nuclear Attack. Really. is the fact that behind the loud heading in it are quite obvious things. Indeed, the current level of development of anti-missile systems does not allow even the leading countries of the world to reflect a massive nuclear missile strike, which uses a large number of intercontinental ballistic missiles with a divided head and means to overcome missile defense. For this reason, as L. Thompson rightly notes, the United States cannot effectively intercept missiles and can only strike a similar retaliatory strike.

Over the past years, L. Thompson has regularly urged the country's leadership to review plans for the development of missile defense, the capabilities of which should be consistent with existing threats and risks. Nevertheless, the next publication is unlikely to affect the intentions of the country's leadership. The implementation of existing plans, which probably will not be significantly adjusted, is underway. Therefore, one should not expect that even in the distant future, the United States will have a missile defense system corresponding to the expectations of L. Thompson.


Article The US Has No Defense Against A Russian Nuclear Attack. Really .:
http://www.forbes.com/sites/lorenthompson/2015/03/20/the-u-s-has-no-defense-against-a-russian-nuclear-attack-really/