March 26 2015
164
On the eve of the activists of the Belarusian "version" of Euromaidan held a celebration of the so-called Freedom Day. The holiday of this Belarusian "belolentochniki" celebrates 25 in March, coinciding with the next anniversary of the Belarusian People’s Republic (1918-1919). The main slogans of those gathered in Minsk were: “Stop, empire!”, “Crimea to Ukraine”, “Belarusian language is the only state language”, “Russia is a war” 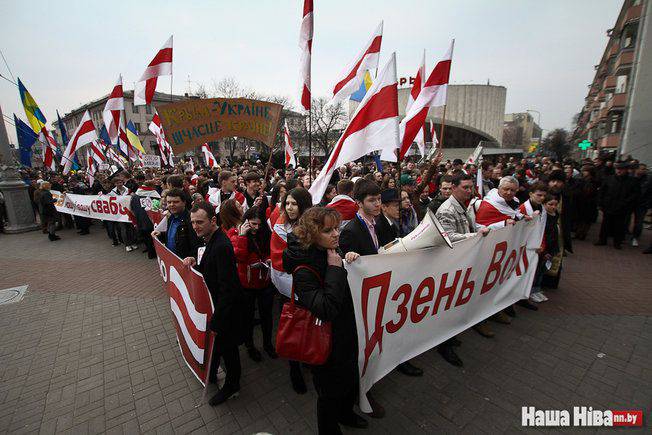 In addition to the white flags with a red stripe (the BNR flag (1918-1919) and the Republic of Belarus (1991-1995)), which today in the Republic of Belarus is considered one of the main opposition symbols, Ukrainian flags flashed over the assembled ones. Not without EU flags. The replica “Who does not jump, that Moskal!” Caused a stormy enthusiasm among those who gathered at the “celebrations”, after which the youth (and it was mainly young people who came to the “celebrations”) began to ride under the Maidan proverb.

The rally was organized by the Belarusian opposition: Alexey Yanukevich, Rygor Kostusev, Vitaly Rymashevsky and others.

Belarusian opposition media in particular «Our Niva», in enthusiastic tones wrote about what is happening at the rally. Apparently, the Belarusian Maidanophiles are preparing for presidential elections, and begin to showcase their forces to potential sponsors from the EU and the USA.