March 26 2015
53
KS-23 (special carbine 23 mm) - multifunctional weapon for arming police units. It is used to curb riots, selective mental, chemical or forceful influence on public order violators. It is a non-automatic pump-type shotgun, that is, its reloading is performed mechanically, by moving the forearm with a hand holding it back and then forward.


Work on the creation of this shotgun was begun in the 1970-ies, it was developed by order of the USSR Ministry of Internal Affairs. The technical assignment for the creation of a special carbine was formulated by the designers and engineers of TsNIITochmash and the research institute of special equipment of the Ministry of Internal Affairs. That is, the best cadres of the state worked on it. The following tasks were set before the new carbine: support for assault groups in apprehending highly dangerous criminals, suppressing mass protests with minimal damage to citizens (as an effective non-lethal means), and also conducting counter-terrorist operations (although in those years there was no such wording yet). The new weapon was conceived as a purely police weapon, while its use had to be quite flexible.

The novelty entered service only in the 1985 year, and so far, various KS-23 carbines are in service with the power units of the Russian Federation and a number of countries in the post-Soviet space. In the name of the carbine is not for nothing that there is the letter "C", revealing its special component. The weapon is really special and specific, it is in the caliber, barrel design, types of ammunition used, which allow for great tactical flexibility of using the KS-23. 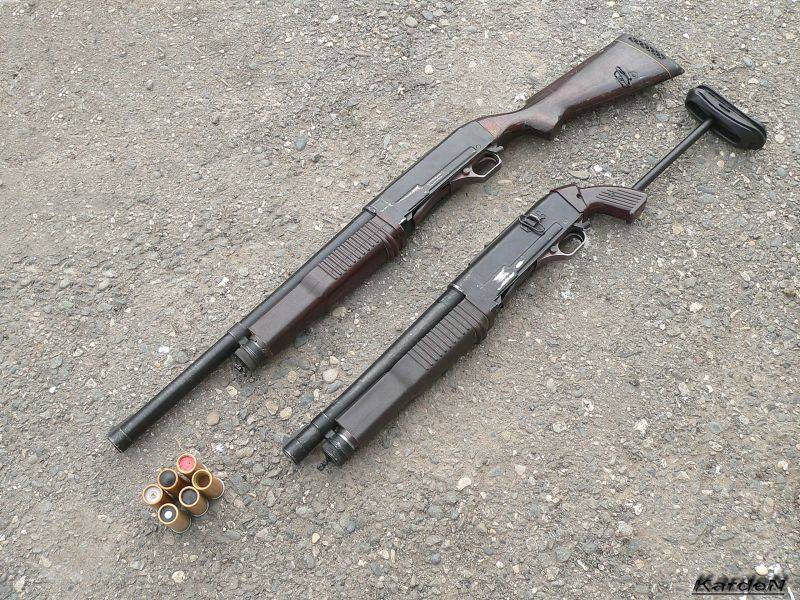 The incident of this weapon is that according to the GOST standard classification generally accepted in our country, this carbine is an artillery gun, since it has a caliber larger than 20 mm. In principle, guns of the fourth (hunting) caliber (“goosenecks” or “canisters”), which are usually used for shooting at flocks of wild birds, can be found on the market, their nominal caliber is 23,75 mm. By the way, it was on the basis of the fourth-caliber hunting cartridge in our country that an 26-mm cartridge was developed for our Shpagin signal pistol. And then on the basis of this cartridge was developed and ammunition for a special carbine KS-23. This raises the question, but why are the calibers different? The answer is quite simple - a rifled barrel is used in the KS-23, these grooves also “eat up” the 3 mm.

The rifled barrel approach pays off. A rifled carbine was made so that it could provide the required accuracy of fire. The fact is that the representatives of the Ministry of Internal Affairs demanded that Soviet designers develop a carbine with such accuracy that it was possible to get into the small window of the airliner even from a relatively long distance. The designers realized that this problem simply cannot be solved without using a rifled barrel. Another fact is also of interest. The barrels for the KS-23 carbine are shortened and turned on the outside (to reduce weight) automatic 23-mm barrels aviation guns. This is such an original solution that simplified production and reduced the cost of the product. The trunk of the KS-23 was locked by turning the bolt on 4 radial lugs. The total length of the barrel was 510 mm, and the length of its rifled part was 410 mm, in total there were 10 grooves in the barrel.

Almost immediately after the launch of the KS-23 carbine, work began on its upgraded version of the KS-23 M code number “Drozd”. It was designed to arm the police and units of the internal troops of the Russian Federation. The upgraded version was created on the basis of the KS-23, work began in October 1990. At first, the new carbines were known as C-3. The first batch of 25 such C-3 carbines was transferred to 10 tests on December 1991 of the year, after which the carabiner was renamed from C-3 to KS-23M “Drozd”. The carbine was successfully tested and was adopted by the police and the Interior Ministry of Russia. 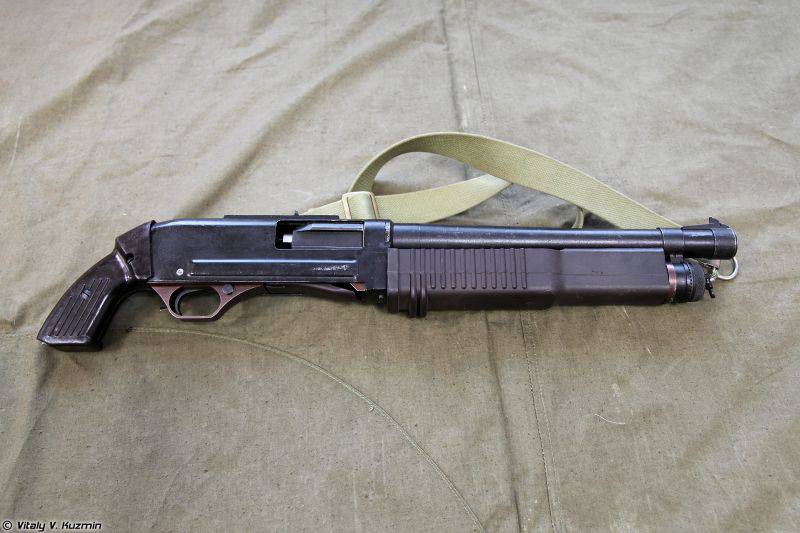 Carabiner KS-23М is not automatic. The mechanics of reloading this carbine works the same as that of a pump gun - from a longitudinally sliding forearm, which is rigidly connected to the bolt. Powered carbine Stock is made from tubular magazine, calculated on 3 cartridge, store placed under the barrel weapons. On the carbine used trigger mechanism trigger type. When fired, the bore was locked by turning the bolt's larva. For the firing of these weapons could use the entire range of ammunition, which were created for the KS-23. In addition, the installation of barrel nozzles "Nozzle-23" and "Nozzle-12" became possible on the KS-6М.

On the KS-23M carbine, an open sight, not adjustable, was used. Butt on it was replaced by a T-shaped shoulder rest. In addition, a pistol grip appeared on the weapon. Handguard and pistol grip were made of plastic. Despite the fact that the KS - 23M “Drozd” had a more compact size compared to its predecessor, it did not solve the main problem, which was incorporated into the design of the carabiner with a tubular magazine. We are talking about the impossibility of a quick replacement of the type of ammunition used (for example, you would need to quickly replace the cartridge with a rubber bullet with a cartridge with a gas). This problem was solved only in the KS-23K carbine. 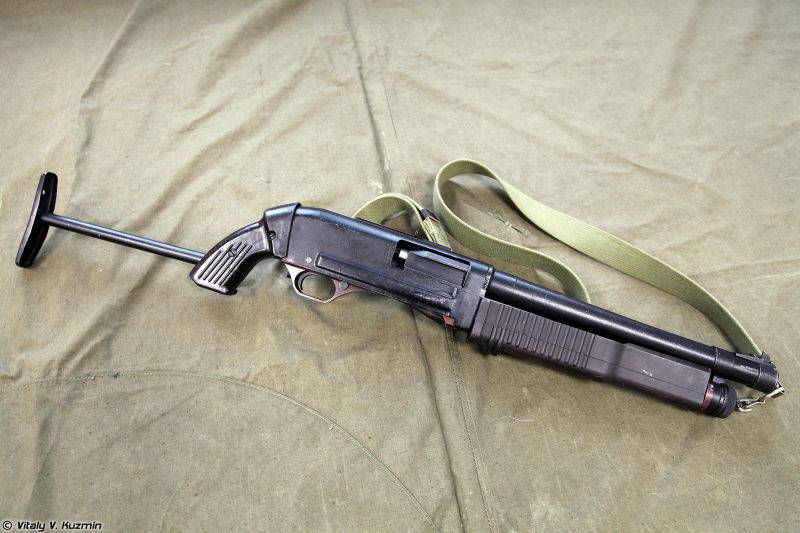 If the carbine with the letter “M” in the title can be safely considered as a modernization of the base sample, then the model with the letter “K” is a completely different weapon. The motives of its creators, who have retained the old name, replacing only the letter, are not entirely clear. Yes, the weapon still has the same goals, there are common ammunition and identical parts in the design, but otherwise there are striking differences. So KS-23K is a carbine, which is built according to the bullpup scheme. That is, the control handle is located in front of the store. At the same time, unlike the first two models, the power is supplied from a detachable box magazine designed for 7 cartridges. A number of experts believe that such a decision pursued not only an increase in the capacity of the store, but also provided the ability to quickly change the used ammunition. You can always change the store with some ammunition to the store with others.

The KS-23K carbine uses a safety lever that was moved to the left side of the weapon and was located next to the pistol grip. The window for ejection of spent cartridges was covered with a special plate, which was opened only at the moment of reloading the weapon. In addition to this there stand the sight, which also serves as a handle, which is used to carry the rifle.

The basis of the versatility of the special carbine KS-23 has become a wide range of used ammunition. It was possible to use both ordinary hunting cartridges of the fourth caliber (shotguns), as well as specially designed ammunition and equipped cartridges of their own from a signal pistol from the secondary school.

"Wave" - ​​a cartridge with inert ammunition for shooting drill.

Volna-R is a cartridge equipped with a traumatic rubber bullet. Effective when firing at a distance of up to 70 meters. At the same time he has limitations: it is prohibited to shoot with such cartridges, closer than 40 meters. At such a distance there is a probability of causing serious injuries that can lead to death.

"Strela-3» - a cartridge equipped with a plastic bullet traumatic.

“Bird-cherry-7” - cartridge, equipped with CN tear gas, has a range of 150 meters. In the state form a cloud of gas volume in cubic meters 30 intolerable concentration.

“Bird-cherry-7M” is an upgraded version of the previous cartridge, which has a volume of released tear gas increased to 50 cubic meters.

"Lilac-7" - cartridge, equipped with tear gas CS, compared with CN is more effective for citizens who are intoxicated. The firing range of such a cartridge 100 meters, the volume of gas emitted CS - 50 cubic meters.

"Shrapnel-10» - a cartridge equipped with a charge of buckshot with an effective firing range of 10 meters.

“Shrapnel-25” is a cartridge equipped with a shot of a canister with an effective range of 25 meters (enhanced charge).

"Barricade" - cartridge, equipped with a pointed steel bullet. Originally intended to stop vehicles due to engine damage. But, naturally, it can be used as a lethal ammunition, as well as an armor-piercing agent.

The blank cartridge is used for a sound baffling effect, as well as for firing with special barrel nozzles.