Is Kudrin's resignation a sign of a split in the elite? 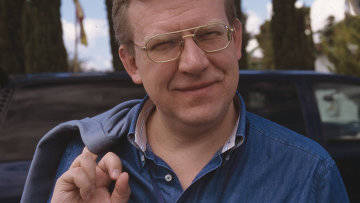 Aleksey Kudrin publicly explained his resignation by disagreement with “overstated” budget spending, but the traditions of Russian politics allow commentators to argue about a deeper underlying reason for his departure, right up to the ideological split in the ruling elite.


“For several months, despite my numerous objections, including public, in the sphere of budget policy decisions were made, no doubt, increasing the risks of budget execution,” - this is, according to Kudrin, the main reason for his departure.
Kudrin said that he had long since decided to leave, and "emotions have nothing to do with it." This, however, does not explain the loud and demonstrative manner in which he left was not entirely typical of Russian politics.

The head of the Regnum news agency, an employee of the presidential administration in 2005-2007, is Modest Kolerov, who is the main author of the Kudrin scandal.

“For a second this man in the paroxysm of his greatness suggested that he would now face Putin and Medvedev with their heads, and Putin would say: well, stay, Alex, I love you,” Kolerov sneers.

This is not forgottenAccording to his assessment, Kudrin’s Washington statement that he would not work in the government of Medvedev was such a demonstrative attack against the future prime minister that he could no longer forgive his tandem.

"His previous statement, they say, do not do it, Medvedev and Putin, nonsense, spend primaries in your United Russia and decide which of you is in charge, according to the Minister of Finance, was already hooliganism, but it did not affect the systemic assessments of professionalism , programs and so on, "Kolerov told bbcrussian.com.

A publicist, editor of the politics department of the Kommersant newspaper, Gleb Cherkasov, believes that the expulsion of Kudrin demonstrates the desire of the Russian rulers on the eve of difficult times to ensure complete external unity and unquestioning obedience within the power structures.

"September 24 determined the structure of power in our country for the long term. I was also determined. Emotions have absolutely nothing to do with it"
from the statement of Alexei Kudrin about the reasons for resignation

“The bosses are very well aware that there is a very difficult period ahead, primarily from an economic point of view, and on the threshold of it they want to accumulate as much as possible the resource that they believe provides unity,” said Cherkasov at bbcrussian.com.

According to Cherkasov, discussions will no longer be allowed even to such an authoritative member of the government as Kudrin, who has worked alongside Putin for more than 11 years and survived the three Prime Ministers dismissed by Putin.

Conditional conflictThe billionaire and failed leader of the Right Cause party, Mikhail Prokhorov, wrote on his blog on Tuesday that Kudrin’s resignation confirms his thesis about the conflict between conditional “conservatives” and “modernizers” in the ruling elite.

“Allegedly, the opportunity that existed for me to head the Right Cause was actually absent for me. I did not consider for myself the prospect of participating in an artificial project that actually discredits the liberal democratic idea”

“It is clear that the reason for the resignation of Mr. Kudrin is not in a personal conflict with the President, but in a conflict of concepts, views on the further development of the country,” writes Prokhorov. True, he is now not quite sure who to regard as a “conservative,” but whom he is a “modernizer.”

A well-known Russian economist and liberal, scientific director of the Higher School of Economics Yevgeny Yasin speaks about the ideological discrepancy.
“This is a certain split in the elite — maybe insignificant, but expressive. It’s not just personal sympathies and antipathies, but rather fairly basic lines in politics,” Yasin told Interfax, commenting on the resignation of the finance minister with the image of a liberal in economics and politics.

Political consultant Dmitry Orlov, who is close to the Kremlin, also sees a sign of ideological differences in Kudrin’s departure, but only presents them in a completely different way.

"This is a conflict between conservatives in the face of Kudrin and supporters of more vigorous growth," Orlov said at bbcrussian.com.

We are in Yandex Zen
Modest Kolerov: Talking about the exchange of Russian recognition of independence of South Ossetia - lies
Kolerov: "We must respect the choice of the peoples of the Baltic and Transcaucasia, even if it leads them to death"
6 comments
Information
Dear reader, to leave comments on the publication, you must to register.