The Big Three and the Polish Question 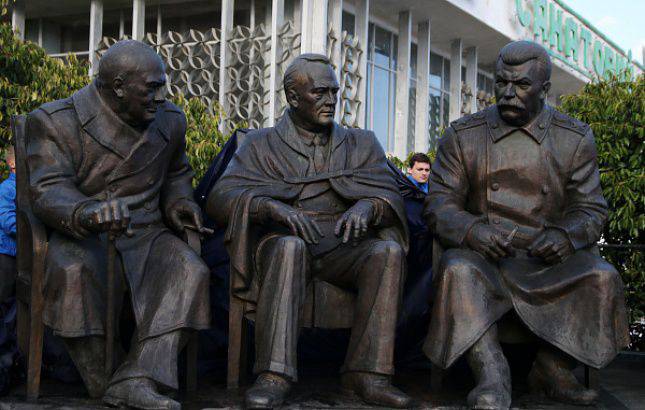 A member of the Zinoviev Club recalls the people to whom Poland was restored on the political map of the world.

Seventy years ago, on February 4 of the year 1945, in the Crimea liberated from the German and Romanian invaders, the Big Three Conference opened.

One of the main issues that Joseph Stalin, Winston Churchill, and Franklin Delano Roosevelt discussed was Polish.

Polish politicians often allow themselves to make tactless statements about our country. Olga Zinovieva wrote about the attack of the former President of Poland Lech Walesa in the article Give the Atomic Bomb to the Nobel laureate of the world. In January, 2015, the Polish Foreign Minister Grzegorz Schetyna made an absurd statement, stating that the liberators of Auschwitz were the First Ukrainian Front and the Ukrainians.

To think that is grossly distorted history only ignorant and sassy politicians are not worth it, although there are many such in Europe. However, the minister who has hardly finished the Faculty of Philosophy and History of Brotslav University is among the ignorant. He is a typical evroperer.

However, observers differ in assessing the mental abilities of a cynical Russophobe. After all, one does not have to be a historian to find out that representatives of different nationalities fought shoulder to shoulder in the ranks of all the Soviet fronts. Four Ukrainian fronts appeared on October 20. 1943 a year after the renaming of the fronts of Voronezh, Stepnoy, South-West and South that already liberated the territory of the Ukrainian SSR. The fact that Voronezh is the regional center of Russia, the Minister of Foreign Affairs of a European country, it seems, should know.

The abominable trick of Shetyna is not the last scandal provoked by the Poles. It is likely that the next demarche of falsifiers of the history of the war will be associated with the 70 anniversary of the Crimean (Yalta) Conference of the Heads of State of the Anti-Hitler Coalition. It addressed the issue of the borders and future of Poland.

Since Shetyna and his ilk can give out another historical fake, which will be instantly promoted by "independent" Western media, let us recall how the Polish question arose and how it was resolved. And also about how, thanks to whom Poland was restored on the political map of the world and got industrialized areas in the north and west of the country.

Poles during the war

Second Rzeczpospolita, which played an important role in unleashing World War II (see the article The Polish culprits of World War II), was defeated by the Wehrmacht in four weeks. September 30 The Paris self-proclaimed government in exile, led by General Wladyslaw Sikorski, arose in Paris in 1939. In 1940, it moved to London.

Before the German attack on the USSR, relations between the USSR and the Sikorsky government were hostile. But on July 30, 1941, they signed a political agreement. An additional protocol provided for an amnesty for all Polish prisoners of war. And they got it right away.

14 August the governments of the USSR and Poland entered into a military agreement. According to him, the Polish army was to be organized in the USSR in the shortest possible time, parts of which "will be moved to the front upon reaching full combat readiness."

Harsh autumn 1941 of the year weapons there was not enough even for the militia who defended Moscow, but the Kremlin did everything possible to dress, feed and arm the emerging units of the Polish army. But General Vladislav Anders, who commanded her, did everything not to participate in the war on the side of the USSR. When Stalin understood this, in response to Churchill's request, he consented to the departure of the Poles to Iran from the British.

As today, not all Poles agree with the policy of their government towards Russia, so in the 1940s, not all were like Anders. The remaining Polish patriots in the USSR, led by Lieutenant Colonel Zygmunt Berling, were eager to beat the German invaders. They participated in the liberation of Poland, the capture of Berlin and were the only foreign troops that took part in the Victory Parade on Red Square Moscow 24 June 1945 of the year. Anelia Kzhivon became the only foreign woman who was posthumously awarded the honorary title of Hero of the Soviet Union during the war.

In principle, London sidelanders behaved differently. Until the spring of 1943, they were more disreputable than they helped the heroic battles of the Soviet people. And in April, 1943, the unthinkable happened at all - the emigrant government of Poland, which was formally our ally in the Anti-Hitler Coalition, actively supported the Katyn provocation of the Third Reich.

13 of April Radio Berlin reported that the remains of 10 of thousands of Polish officers who were killed by the NKVD Soviet secret police in the spring of 1940 were found near Smolensk in Katyn. The London Poles immediately picked up Joseph Goebbels’s idea, seeing in it the blackmail tool of Moscow with the aim of achieving its agreement to establish the future Soviet-Polish border along the line that existed on 1 September 1939 of the year.

Guided by their geopolitical goal, they ignored both the numerous testimonies of residents of the Smolensk region who saw the Poles alive in the autumn of 1941 and the fact that the Poles were shot from German weapons and German cartridges, and their hands were not tied with paper twine.

Not embarrassed by the followers of Goebbels and the fact that the territory on which the graves of Polish officers were found, was near the road and the Dnieper pier, and before the war was not even fenced. Since the locals went there when they wanted, it was difficult to get away from the question: could not the Stalin executioners find a more secluded place? London Poles overcame this difficulty.

In the affairs of the Smolensk city government after his release, a notebook of the Smolensk burgomaster B. G. Menshagin was found. 15 August 1941, he wrote down: “To detain all POWs who have fled the Poles and deliver them to the commandant's office.” Apparently, it was about the Poles contained in 1940 - 1941. in the Soviet camps to the west of Smolensk and working on the construction of the highway. In the chaos of the first weeks of the war, many of them were left to their own devices.

Supporters of the Goebbels-Polish version of the Katyn events say without a word that Menshagin’s notebook is a fake fabricated by the NKVD. They are not even embarrassed by the fact that the authorship of Menshagin was confirmed by the graphological examination of handwriting and the testimony of his deputy, Professor B. V. Bazilevsky.

The fact that the Polish authorities so unceremoniously treat monuments to soldiers-liberators and so brazenly falsify the history of the war, partly guilty are Soviet and Russian officials and deputies. With ease, they agreed to hang the responsibility for the Katyn crime on Stalin and the USSR. No one bothered to clearly explain at least the strangeness mentioned above. And the oddities of the Katyn case are a wagon and a small truck.

Polish historians and politicians are well aware of them, ignoring inconvenient questions for themselves just as stubbornly and consistently as the West ignores facts that refute its version of the death of a Malaysian Boeing in the sky of New Russia. The reasons why Poles are singing the verses composed by Goebbels are clear. And why should we do this?

Polish question at the Crimea Conference.

The author of the monograph "Stalin: creator and dictator of a superpower", Professor Evgeniush Durachinsky, claims that Churchill was the "main negotiating party" with the USSR on the Polish question. Anyway, going to Moscow in October 1944 of the year, the British Prime Minister took with him the then head of the Polish émigré government, Stanislav Mikolajczyk. The latter had already been to the Kremlin a bit earlier. While there, he kept silent that on August 1 the capital of Poland would rise.

Only 3 of August, Mikolajczyk told Stalin that the capital of Poland had risen, there are several ministers of the emigre government there, and he is going to fly to Warsaw. To Stalin's remark that there were Germans, the Polish leader replied that the city would be free from day to day. The London Poles hoped to seize Warsaw and declare their power before the Red Army entered it. The adventure ended in defeat, claimed the lives of tens of thousands of Poles and did not contribute to mutual understanding between Stalin and Mikolajczyk.

Even in Tehran, Stalin proposed to move the western border of Poland to the west, and the eastern one along the Curzon line. US President Roosevelt supported him, and Churchill emphasized that "this plan is a good and even the best of all" that the Poles can count on, since "German lands are much more valuable than the Pinsk swamps. These are industrially developed areas."

At the Crimean Conference, Stalin stated that the Polish question for Russians was a security issue, because throughout history Poland has repeatedly become the corridor through which the enemy passed: “The Polish corridor cannot be closed mechanically from the outside only by Russian forces. It can be safely closed only from within Poland’s own forces. To do this, Poland must be strong. That’s why the Soviet Union is interested in creating a powerful, free and independent Poland. " As proposed by Stalin, the eastern border of Poland was determined along the Curzon line with retreat from it in some areas from 5 to 8 km in favor of Poland.

At the beginning of 1945, politically, Poland remained divided into pro-Western and pro-Soviet supporters. But the country was liberated by the Red Army, and many Poles treated the USSR with sympathy and gratitude. Stalin was not one of those who danced to Churchill's "tune" and London Poles who hated the USSR. A month before the conference, he established diplomatic relations with the Lublin government.

In Yalta, Stalin drew an analogy between the French and Polish governments, emphasizing that neither the government of Charles de Gaulle nor the Provisional Government of Poland had a clearly defined mandate of voters. But since the USSR recognized the regime of de Gaulle, then the allies should do the same with respect to the Lublin government.

Stalin also recalled that he did not present Churchill with accounts for the formation of the Greek government. It was hard for the British Premier to argue with that. Indeed, in October 1944, Churchill was the initiator of the division of Europe into spheres of influence. He lost the battle for Poland and a year later he screamed about the “iron curtain”.

The Poles who survived the war remembered who owed their salvation from the horrors of the Nazi occupation. In the twenty-first century, many of their descendants servilely fawned on Germany and try not to remember that, freeing Poland from the Germans, the Red Army only lost more than 600 thousands of soldiers and officers who were killed! Thanks to these heroes, the ancestors of the modern Poles survived, and did not go to the gas chamber and to the soap.

Walesa, Shetyna and other Polish politicians love the USA so much and are so “tolerant” that they do not fundamentally distinguish the murderers from those who saved the Poles at the cost of their own lives.