Outsourcing in the army: or 401 th way to honestly weaning budget funds 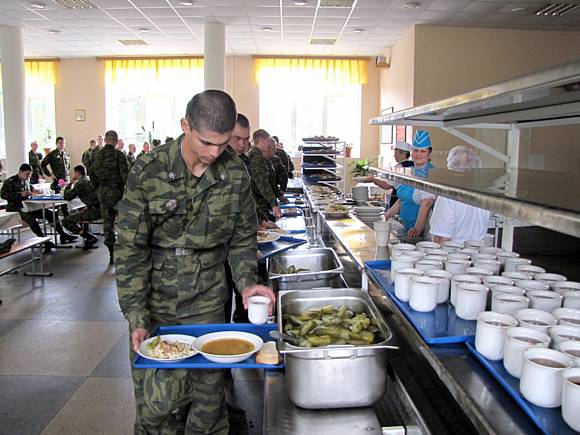 With corruption, as we know, the struggle is on all fronts. But only now something while corruption beats all those laws and obstacles that they are trying to repair. Moreover, the victory of corruption can be recognized both at the local level and on the national scale. We need to talk about army corruption in a separate way, since our army today is in such a state that it absorbed the worst of the Soviet era and at the same time managed to absorb new ideas of rather dubious content.

One of these, seemingly good ideas for the Russian army can be considered the idea of ​​outsourcing. In this case, outsourcing should be understood that army units will ensure their life not by themselves, but with the help of hired civilians. To this end, even with the help of the state, special companies were created that are designed to relieve military personnel from the overwhelming harvesting of barracks and adjacent territories, refueling of military equipment, food and medicine supplies and other non-military affairs. The idea is clearly borrowed from the West with the expectation that our military will spend more time on combat training, tactical training and the development of new military equipment. Yeah - right now! This is what turns out, our military will have to pay money to civilian offices, whose representatives will carry out the cleaning of floors and toilets, the delivery of pasta and buckwheat. Yes, do not happen to that!

Of course, on paper, outsourcing has long been implemented in our military units. The employed “Marivanny” and “Vanvanichi” have already “successfully” replaced the fighters in the chores - they clean the potatoes, rub the floor in the sleeping quarters of the barracks.
However, in reality everything, to put it mildly, is somewhat different. Responsible persons in this situation took two paths, and neither of these paths can be called real legal outsourcing.

So, the first way. Or affiliate outsourcing

It consists in the fact that according to the documents, the military unit cooperates with a certain LLC “Pupkin and Sons”, which for a certain fee takes upon itself the entire responsibility to ensure combat service in the framework of economic work. Upon closer examination, it turns out that Pupkin and Sons is de facto under the control of the leadership of the military unit. Not only controlled - it often happens that the director of this business company is either the general’s wife or other relatives of the responsible person. And where are the tenders, according to which it was necessary to choose from a number of companies, moreover so as to reduce the expenses of the military unit? You will not believe, but there were tenders, only they were again on paper. According to them, several companies competed with each other at once, which set prices for their services at transcendental heights. And here the absolute victory is celebrated by the very company “Pupkin and Sons”, which in the price list is slightly lower than the “competitors”. At the same time, no one or almost no one pays attention to the fact that the military has other companies that can remove garbage and wash clothes for two or three times less than Pupkin. But who will give such companies outsourcing to the right and left ...

As a result, the money flows into the pocket of the generals through the same affiliated company that the general created at the family council.

The second path. Or "dirty" outsourcing

In this case, a certain company is also appointed with the help of “paper” tenders, which undertakes to conduct the economic affairs of the military unit. In fact, such a company does not exist at all. There is only a bank account, where budget money is transferred. You can even guess who this account belongs to. And who washes the toilets and washes the shoes? Guess ... Of course, the same fighters who did this throughout stories Russian army. No doubt, they were immediately instructed by high ranks that, in the case of a certain correspondent interest, they would have to answer that all civil servants were carrying out civilian work, and they, they say, only shoot high-precision weapons, are engaged in 3D simulators and use the latest navigation systems in combat exercises. And God forbid, if any of the rank and file even stutters that “precision weapons” are machine guns of the seventies, “3D simulators” are a wooden tactical training town, and “the latest navigation equipment” is keen the eyes of a soldier and a twenty-kilogram walkie-talkie behind his back.

Here he is such a military outsourcing in Russian. First you need to deal with corruption, and then use the NATO standards to ensure the army in the vast expanses of our country.

We are in Yandex Zen
"Army games". Masters ABT. Part of 1
"Army games 2015". Opening with our eyes. Reportage
2 comments
Information
Dear reader, to leave comments on the publication, you must to register.