March 24 2015
78
The Yurga motorized rifle brigade, deployed in the Kemerovo region, is fully rearmament with modernized Tanks T-72B3, reports RIA News with reference to the representative of the Central Military District Yaroslav Roshchupkina. 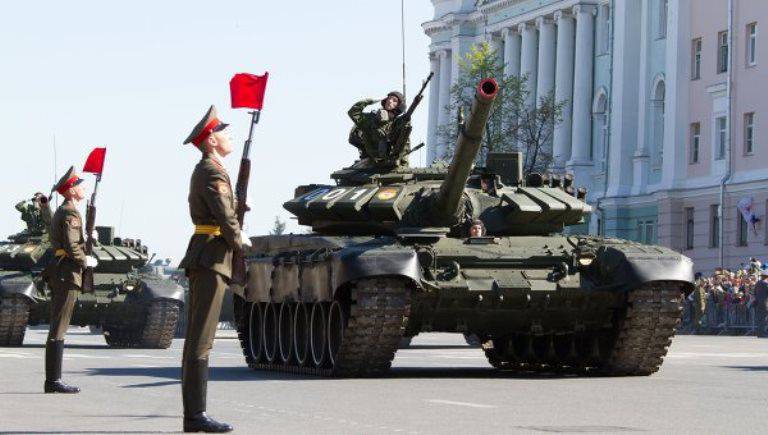 “The Yurginskaya motorized rifle brigade became the first unit of the Central Military District, completely re-equipped with deeply modernized T-72B3 tanks. On the eve of the 25 armored vehicles produced by the corporation "Uralvagonzavod" arrived by rail to the unloading station, "said Roshchupkin.

A week ago, the brigade received 15 tanks. “The first batch of 15 machines that arrived earlier has already been handed over to crews, who, together with technical support specialists, have completed an additional training course,” he added.

The upgraded vehicles are distinguished by an “improved fire control system with a digital ballistic computer, a sight with a laser rangefinder and an anti-tank missile control system, and digital communication equipment of the latest generation,” explained the representative of the Central Military District.

Also this year, the re-equipment of the 201 military base deployed in Tajikistan is planned. They expect the arrival of new BTR-82A.

“In the 2015 year, the 201-I military base deployed in the Republic of Tajikistan will receive about one hundred BTR-82А armored personnel carriers recently adopted, which will replace the outdated versions. Delivery from the Arzamas machine-building plant will be held in accordance with the state defense order implementation plan, ”said Roshchupkin.

According to him, “the commanders of the units and their deputies for armament were sent in advance for retraining to military units of the okrug stationed in the Samara region, where new combat vehicles have been in operation since last year.”

Help Agency: “The BTR-82А is equipped with a combat module with an automatic 2А72 cannon of 30 caliber of millimeters paired with a PKTM 7,62-mm machine gun, which proved its effectiveness in combat operations in mountainous terrain. The armament is equipped with electric vertical and horizontal pickups and a digital two-plane weapon stabilizer.

The armored personnel carrier received fifth-generation digital crypto-protected radio stations, topographic orientation systems and combined surveillance devices. Anti-shatter protection is mounted on the internal surfaces of the housing. The gunner's regular place moved from the tower to the hull, which also increased its security. All seats are mounted on energy absorbing mount. The car was equipped with an improved fire extinguishing system. ”