South Korean industry giant Hyundai Rotem showed off a mockup of its new primary combat tank (MBT) K2 Black Panther at IDEX 2015 held in February 2015 in the United Arab Emirates. The company sees the Middle East and Africa as potential buyers of its new tank. 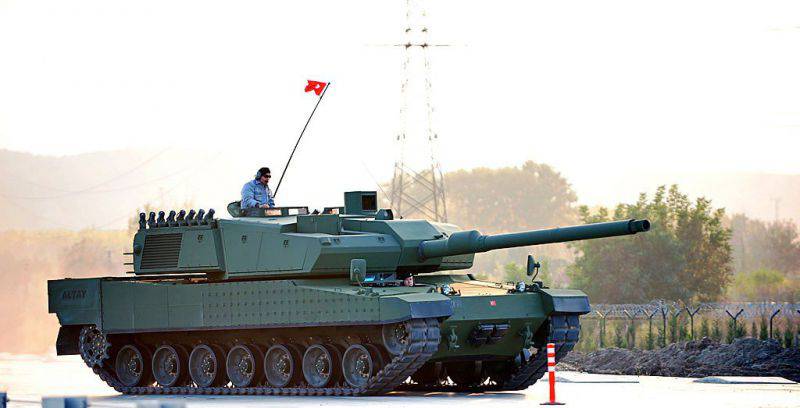 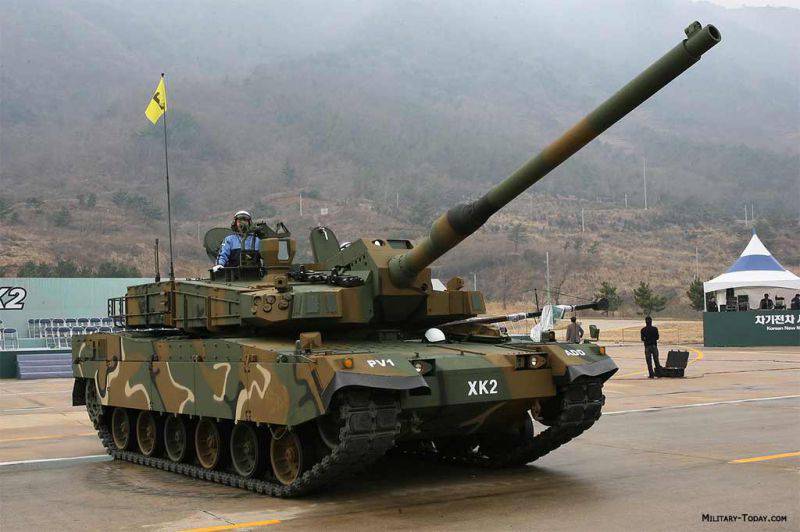 In December, 2014, the Korean industrial giant Hyundai Rotem Co, signed a contract worth 820,29 million dollars with the Office of Defense Procurement for the supply of MBT K2 to the South Korean army. It is assumed that the initial order will consist of 100 tanks with subsequent orders for the supply of more 400 tanks.

K2 will be the main battle tank with an “ideal concept” that will maximize combat effectiveness and optimize the human-machine interface. It is distinguished by a modern cannon with lethal firepower, a compact high-power diesel power unit for excellent maneuverability, modern armor and an active defense system for increased survivability, combat information and control system, onboard electronics and excellent fire capabilities, etc.

The K2 Black Panther MBT has a crew of three crew members, including the commander, gunner and driver. The main armament consists of an X / NUMX-mm smoothbore L / 120 cannon with an automatic loading mechanism. Automatic loader provides loading ammunition in motion, even when the tank is moving on an uneven surface. The 55-mm gun can fire at approximately 120 shots per minute. Additional weapons include an 10-mm coaxial machine gun and one 7,62-mm machine gun mounted on the turret roof.

MBT K2 equipped with composite armor and dynamic protection units. The complex of active protection installed on the tank protects against anti-tank guided and unguided missiles. 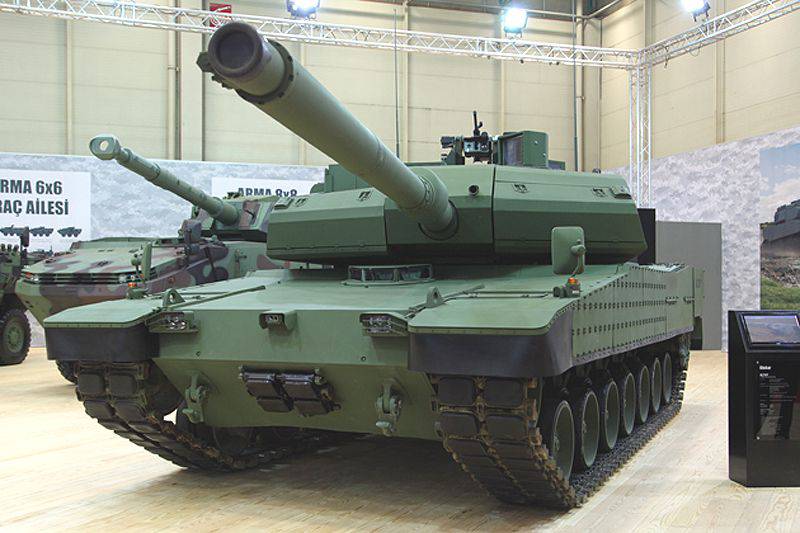 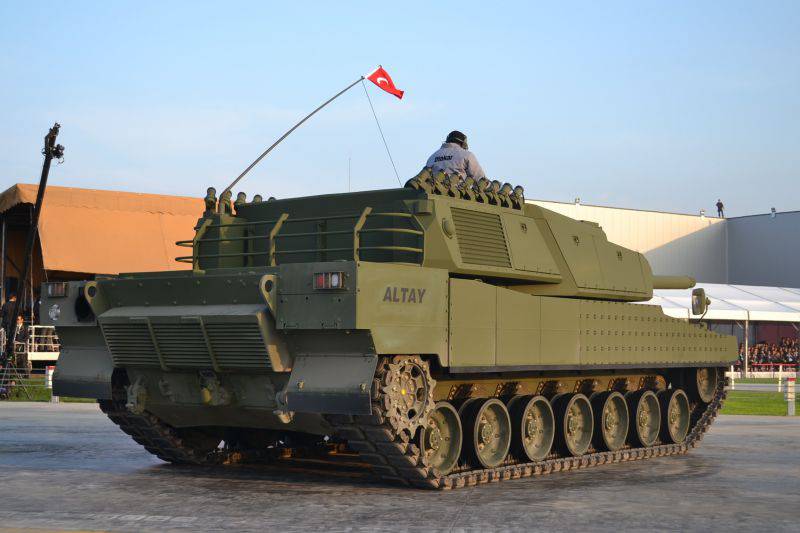 The K2 Black Panther tank was also chosen by the Turkish Ministry of Defense as the base for the local Altay MBT.

Altay is a modern third generation main battle tank designed and developed by the Turkish company Otokar for the Turkish army and foreign markets.

To date, the first prototype of the Altay tank has already passed during tests over 2000 kilometers. At the OTOKAR tank training ground, two prototypes showed a special presentation to the guests of the ceremony. During this show, the running characteristics of the ALTAY tank, for example, acceleration, maximum speed, side ramp, suspension work on a section with rabbings, off-road driving, were demonstrated. At the end of the show, the guests had the impression that after the completion of the development, the tank could become the most modern tank in the world.

The main armament of the Altay tank is an 120-mm smoothbore 55 caliber cannon firing various types of projectiles. The Turkish company MKE was identified as a manufacturer of 120-mm / 55 caliber guns as part of technology transfer from the South Korean company Hyundai Rotem.

The K2 Black Panther is the main battle tank of the new generation MBT, designed and manufactured by the South Korean company Hyundai Rotem. K2 was first shown to the public at the Defense Exhibition ADEX in South Korea in October 2009 of the year. This new tank can replace the K1 tank and other obsolete MBTs, which are in service with the South Korean army. Korean company Hyundai Rotem has signed a contract for the supply of an unspecified number (probably 29) of K2014 (Black Panther) tanks for the South Korean army on 100 on December 2. Currently, production of the K2 MBT is under way, and according to the schedule, the tanks will be delivered from the middle of 2015 of the year to December of 2017. Basically, the Altay Turkish-made battle tank uses systems developed by Hyundai Rotem for the K2 MBT. Altay will have higher chassis performance than K2 Black Panther MBT. It will have a Turkish tower with a modified design and a higher level of booking compared to K2. In September 2013, South Korea submitted an application with the K2 Black Panther to participate in a competition for a promising Peruvian tank.

K2 PIP. In the next few years, an improved version of the K2 tank will be released from the pre-production lot. The following improvements will be implemented:
- Modernization of semi-active suspension units to active suspension units
- Integration of the high-resolution terrain scanning system into the vehicle's suspension system. This will allow the car to “pre-plan suspension behavior” by scanning the nearest terrain at a distance of up to 50 meters in all directions and calculate the optimal position of the undercarriage in order to increase the terrain even on uneven terrain.
- Integration of active defense anti-missile system.
- Installation of non-explosion type DZ units (NERA).
- Theoretically, the replacement of the 120-m gun L55 electrothermal-chemical gun, which will significantly increase the firepower and useful capacity of the machine.

The main armament of the K2 Black Panther tank is an 120-mm smoothbore L55 cannon, manufactured under license from the German company Rheinmetall in South Korea. The gun has an automatic loader that provides charging even while driving on an uneven surface. The 120-mm gun has a firing rate of up to 10 rounds per minute. Having the ammunition onboard the 40 of different types of shots, the Black Panther tank can “arrange the fire hell” for enemy positions for almost three minutes before it is necessary to replenish the ammunition. In the automatic loader in the body is placed the entire 16 shots and 24 shots. K2 tank can fire a variety of ammunition from the gun, including, but not limited to, improved armor-piercing discarding sabot projectile with a tungsten core of local development and improvements that have significantly better broneprobivanie compared with tungsten projectiles of the previous generation, as well as universal cumulative antitank projectiles (HEAT ) like the American M830A1 HEAT MP-T, which can be used against personnel, unarmored and lightly armored vehicles on ground and low-flying helicopters. Paired 7,62 – mm machine gun mounted to the left of the main gun. The 12,7-mm heavy machine gun K-6 is mounted on the roof of the turret on the right. On each side, in the front of the tower, smoke grenade launchers in the visible and infrared spectra (VIRSS) are installed, which also increases the defensive level of the Black Panther tank.

The layout of the K2 tank is traditional, the driver’s compartment in front, the fighting compartment in the middle and the power block in the stern. Protection Black Panther consists of composite armor of an unknown type and an active protection system in which DZ blocks are used. The K2 tank has a crew of three: the driver sits in the center of the hull, the commander and the gunner in the turret. The K2 MBT protection systems include a millimeter-wave radar mounted on the turret, which acts as a missile attack warning system (MAWS). The tank's computer calculates the attacking ammunition by triangulation, immediately warning the crew and firing VIRSS smoke grenades, which effectively block optical, infrared and radar signatures (signs of visibility). When installing an anti-missile complex, the radar is responsible for tracking and targeting attacking missiles. The K2 also has a radar warning receiver and a radio disturber. Four all-view receivers warning of laser irradiation also give the crew a warning that the car was "noticeable" and the computer can give a signal to launch VIRSS grenades in the direction of the beam source.

The K2 Black Panther has a MT 833 MT diesel engine from Tognum. Engine power 1500 HP allows you to get power density 27,3 hp / t. The fully automatic transmission of the K2 tank includes five forward gears and three reverse gears. MBT K2 on coated roads develops a maximum speed of 70 km / h, while in off-road conditions it is capable of maintaining speeds up to 48 km / h. It accelerates from 0 to 32 km / h in seven seconds. It can overcome slopes of 60 degrees and vertical obstacles 1,3 meters in height. Chassis K2 Black Panther: on each side there are six double rubberized track rollers supporting rollers, a driving wheel in the back and a steering wheel in front. The upper part of the chassis closed armored screens. Tank K2 Black Panther is equipped with an advanced suspension system with hydro-pneumatic blocks In-arm Suspension Unit (ISU), which allows you to separately control the progress of each support wheel. This allows the tank to bend so that the main armament can have a declination angle to -10º. 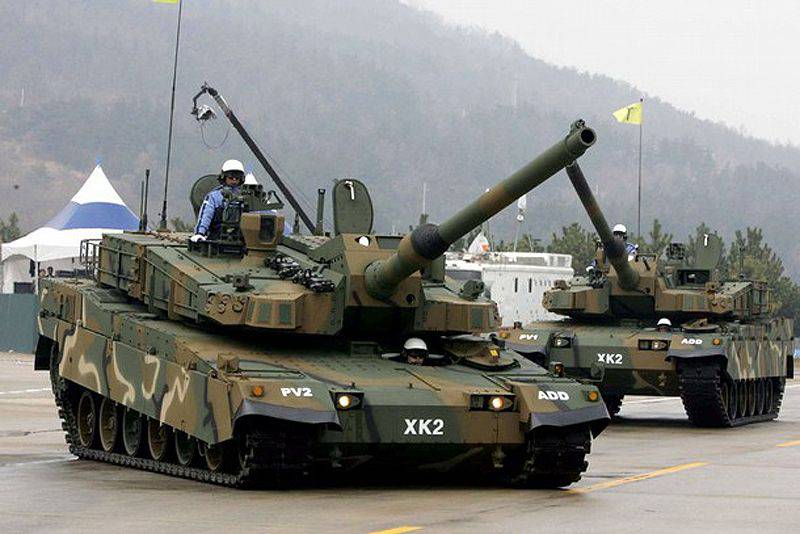 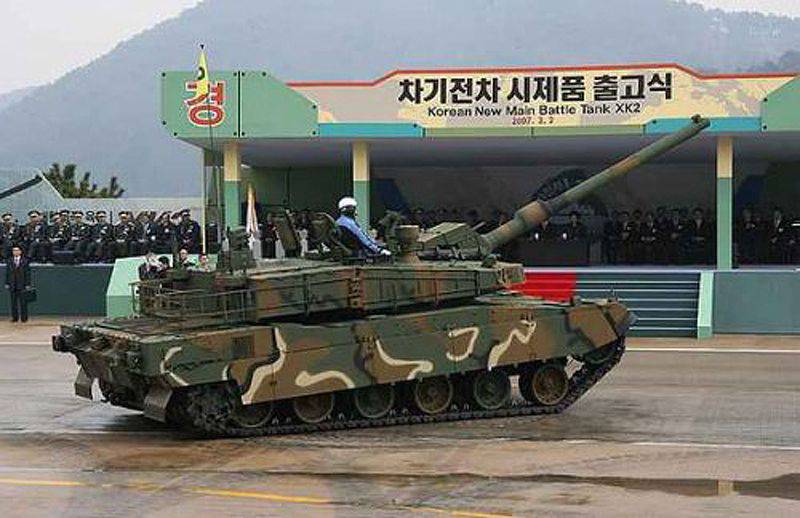 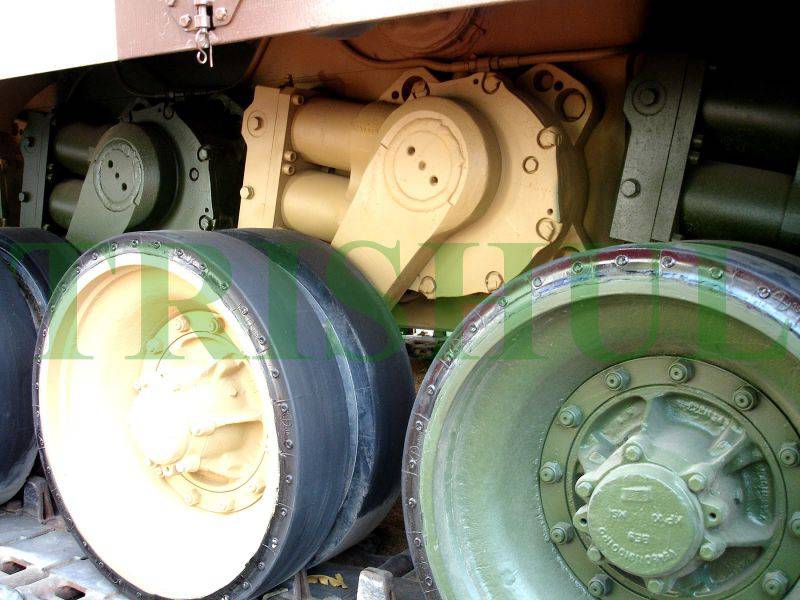 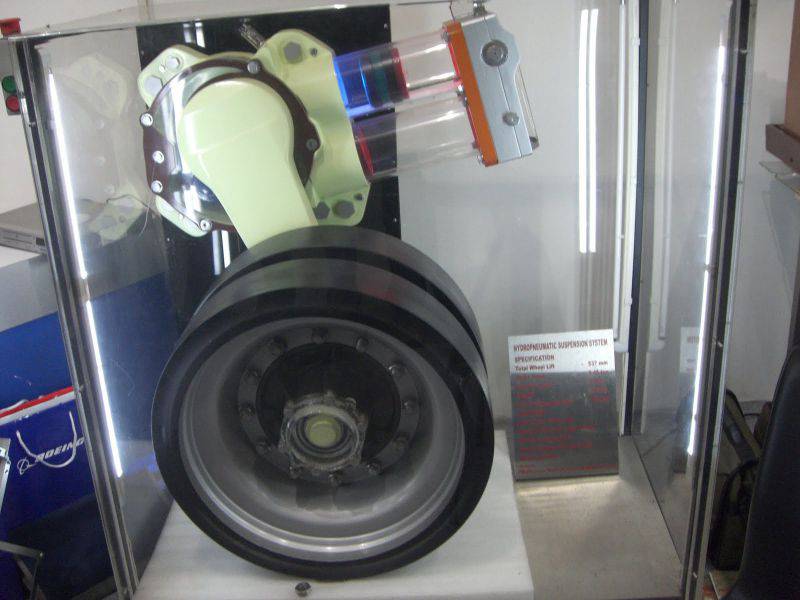 The K2 Black Panther tank is equipped with a modern fire control system connected to a millimeter radar installed in the front of the tower, as well as a traditional laser range finder and wind sensor. The system is capable of operating in automatic tracking mode when it captures and tracks specific targets at distances up to 9,8 km using thermal imaging optics. This allows the crew to conduct accurate fire while on the move, as well as to effectively hit low-flying targets. The gunner's sight is designated as Gunner's Primary Sight (KGPS), the commander's sight is Korean Commander's Panoramic Sight (KCPS). The commander has the opportunity instead of the shooter to take control of the tower and gun. Tank K2 Black Panther is equipped with a system of collective protection against weapons of mass destruction. The detachment of ammunition is equipped with a lifting panel to protect the crew from the explosion of ammunition. The automatic fire extinguishing system is programmed to detect and extinguish any fire when it occurs inside the car, atmospheric sensors warn the crew of the tank entering the danger zone. Tank K2 can cross the river 5 depth meters with the help of an air intake pipe, which also serves as a control room for the commander. Preparation of the system takes about half an hour. The tower becomes watertight when a barrier is crossed, but the chassis can take about two tons of water to eliminate unnecessary buoyancy due to the presence of air inside the machine and to maintain a strong adhesion of the tracks to the bottom. In addition, the tank is ready for battle as soon as it appears on the surface. 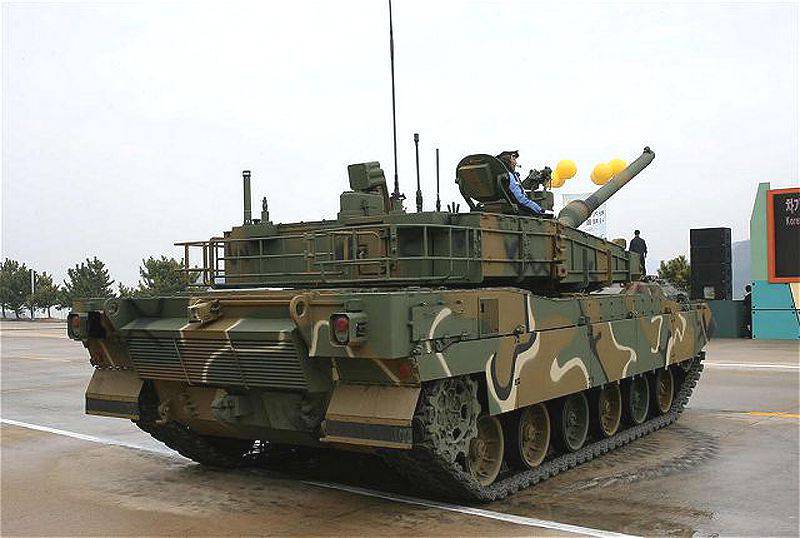 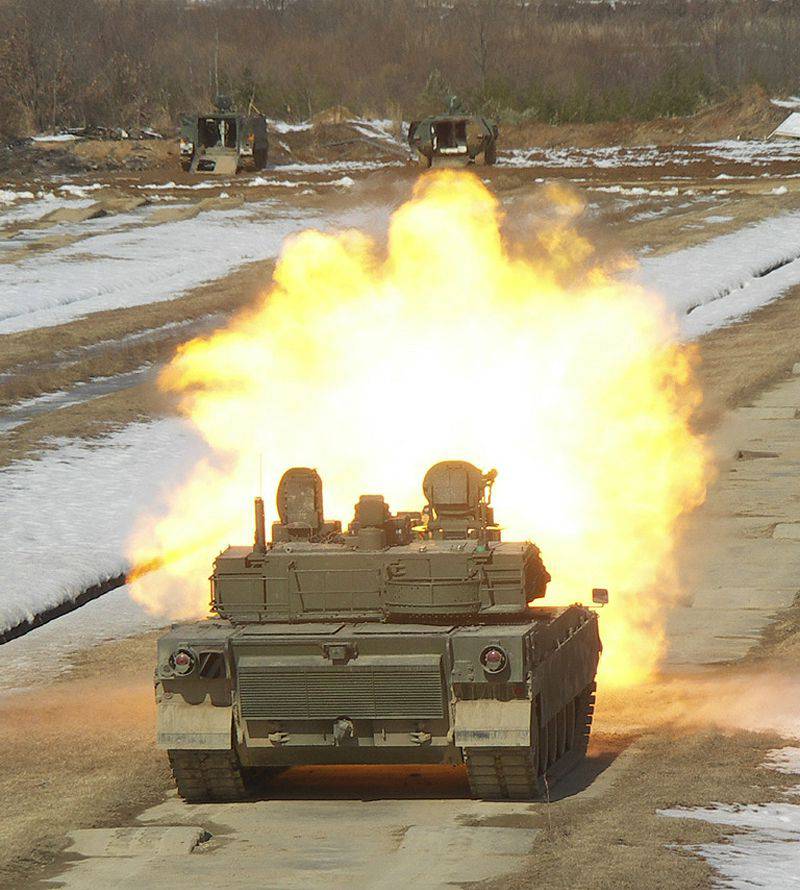 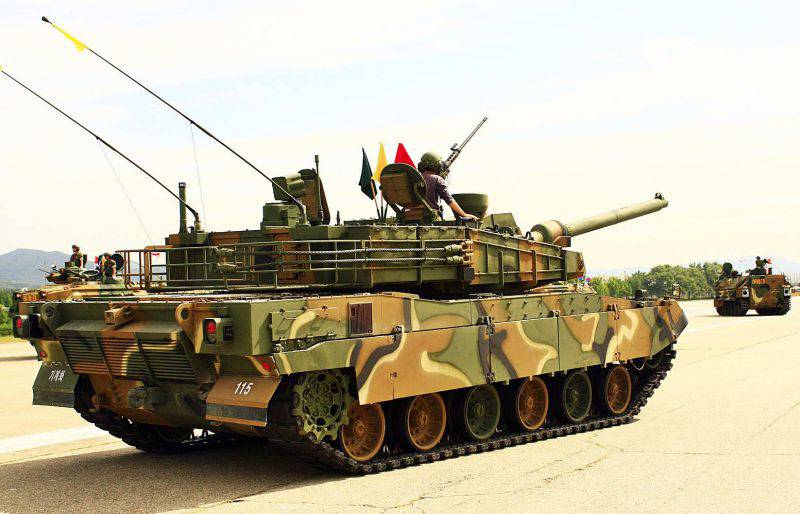 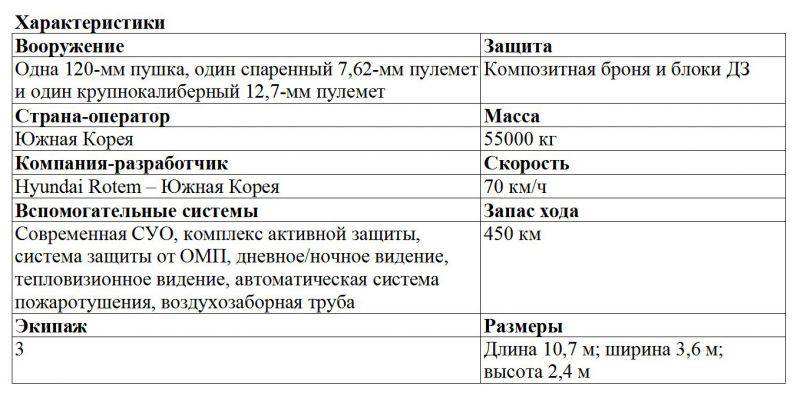