March 24 2015
42
In a documentary film about the return of the Crimea to Russia, President Vladimir Putin, answering a journalist’s question, said: from the sea and from land, the peninsula has now been turned into a well-protected fortress. About the sea itself, nothing was said. Most likely, because the film was devoted to another topic. As NATO strategists, for example, the American General F. Breedlove, commander-in-chief of the combined forces of NATO in Europe, recognize, the Russian anti-aircraft missile systems now cover half of the airspace over the Black Sea. Anti-ship missile systems installed in the Crimea, shoot through the sea.

The general, of course, scares the western layman, hoping to knock money out of him to support NATO forces. However, he is not far from the truth. Our mighty “Bastions” shoot at more than three hundred kilometers. Their warheads cannot fly to Turkey (and this is over five hundred kilometers), but such a distance is within the power of the Black Sea flagship flagships fleet - the cruiser "Moscow". In the sea itself is empty. Here American, Canadian, Italian, French, German ships feel at ease. It is explainable.

In the post-Soviet period, the Black Sea Fleet was dilapidated. Replenishing it was hampered by the position of Ukraine, which strictly controlled the movement of ships and vessels assigned to the Russian naval base in Sevastopol. I remember that in the 2008 year during the five-day war with Georgia, the Ukrainian authorities even directly prevented our ships from entering the combat area. Ukraine itself had neither the capacity nor the desire to build a fleet. She did not want to see next to her and the new ships of the Russian Black Sea Fleet.

Then Russia began to build a fleet base in Novorossiysk. Here and before there was a naval base. But in its composition were small anti-submarine ships, minesweepers, auxiliary and rescue ships. The ships of the ocean zone at the Novorossiysk berths had no place.

The construction of the new base was divided into three stages. The first one was completed in 2008 year. Then, as the military say, they created an opportunity to take ships at berths in a limited mode. That is, streamlined the basing of base forces. Now is the second phase of construction. It is scheduled to complete in 2017. In the plan made adjustments. The central task was the formation of the infrastructure of six diesel-electric submarines of the 636.3 project. Their construction began in the 2010 year. Two boats “Novorossiysk” and “Rostov-on-Don” at the end of last year were accepted into the fleet and are now undergoing deep-sea tests in the North. (They say that they stayed in North Sea bays because of the unavailability of the Black Sea basing stations, the equipment of which should be completed soon.) The third boat, the Old Oskol, was launched last August. In the second quarter it should be operational. At the same time, they will launch the fourth in the project, Krasnodar. The thing is moving little by little. In two years, the moorings of the new base will be able to receive ships without restrictions, but with limited time in the port. Finally, construction will be completed in 2020. Then in Novorossiysk will take ships without any restrictions.

By this time they planned to replenish the Black Sea Fleet with ships of the far sea zone — frigates and corvettes intended for guard actions in the near zone. With the reunification with the Crimea, new basing opportunities opened in Sevastopol. In this regard, part of the ships being built at the shipyards were promptly reoriented to the Black Sea Fleet.

Difficult road to the sea

Today, new frigates “Admiral Grigorovich”, “Admiral Essen”, “Admiral Makarov” are already waiting for the Black Sea. The first plan to pass the fleet this spring. The rest - during the year. On the quality of the input ships and boats have different opinions. Some people are not satisfied with the propulsion systems, some of them are weapons. But all this fades away in the very expectation of replenishing the fleet. A ship under construction is usually monitored by the public at three main stages - laying, launching, entering the fleet. Now people catch every news: the hull was formed, the propulsion units arrived, the armament was mounted, mooring trials began, sea trials, etc. This greed for information speaks of a great desire to feel the rebirth of the Russian fleet. 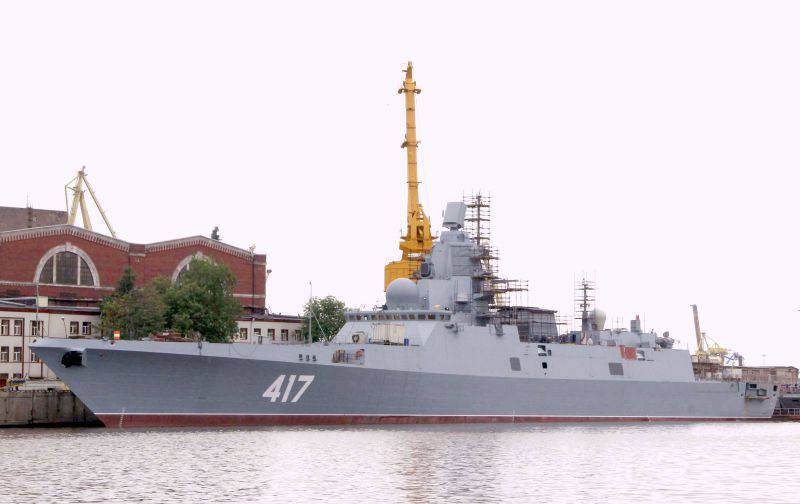 This is not easy. Take for example two objects. The first is the frigate of the 22350 project “Admiral of the Fleet of the Soviet Union Gorshkov”. At the Severnaya Verf, St. Petersburg, it was laid down in the winter of 2006. Four years later, launched. Since then it is being completed, tested ... And only now, finally, should it join the fleet. Informed people know: the delay was due to the fact that the developers of weapons far behind shipbuilders. But this explanation makes little difference. The ship with a displacement of 4500 tons of nine years is under construction. During this time, for example, in the neighboring northern capital Sosnovy Bor, almost two power units of the Leningrad NPP-2 were built. The launch of the first is expected today. And here is a naval example - our only heavy aircraft carrier cruiser "Admiral of the Fleet of the Soviet Union Kuznetsov." It had to be built at a difficult time of restructuring. Nevertheless, the aircraft carrier was laid down in 1982, lowered into the water in 1985, entered into service in the 1991 year - for the same nine years. Meanwhile, the displacement of the cruiser is more than ten times greater than that of the main frigate of the 22350 project. Hence, the amount of work is appropriate. 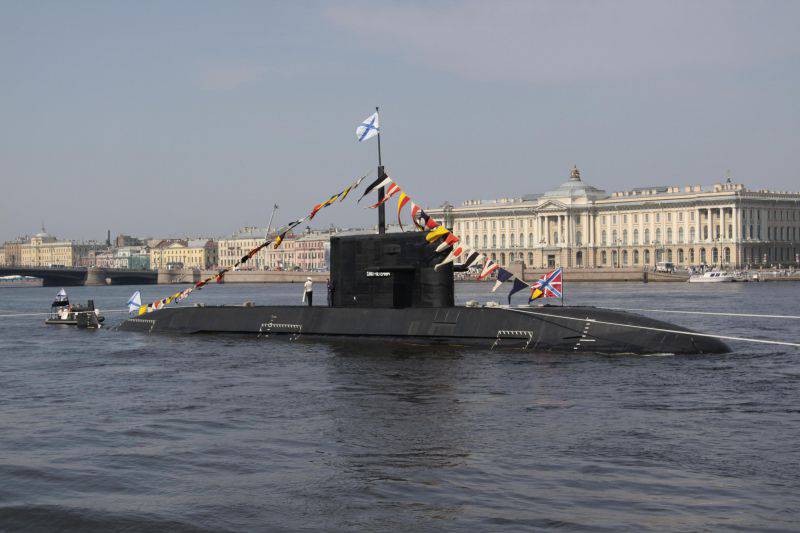 Diesel-electric submarine "St. Petersburg", the head in the project 677 "Lada"

Now the second object is the diesel-electric submarine “Saint Petersburg” built at the Admiralty shipyards, the lead in the 677 project “Lada”. We laid it on the eve of 1998, launched it in the fall of 2004, and after five years passed to factory tests. Since then in her stories little has progressed, except that it was transferred to the status of trial operation. You can, of course, blame the project for the incompleteness, this has happened before. But eighteen years for the removal of comments is a bust. I do not know of other such examples.

Something from the history of shipbuilding

They may say: it’s impossible to compare the Soviet shipbuilding with the current one. Why not? What then to compare? At the beginning of February, the following information passed: Admiral Viktor Chirkov, Commander-in-Chief of the Russian Navy, visited the Urals Diesel Engine Plant, the Ural Turbine Works and the MI Engineering Works in Yekaterinburg. Kalinin. It is clear that led the admiral to the Ural city. Today, the construction of second-level warships is constrained by the supply of high-quality turbines and propulsion systems. There are problems with weapons, which the Kalinin plant specializes in. So the Commander-in-Chief of the Navy decided on the spot to find out what was going on at defense enterprises and what to expect from the fleet. Good thing. Only not royal.

This should deal with shipbuilders. But they are very indirectly related to the mentioned enterprises. The same diesel-engine plant is part of the machine-building holding "Sinara-Transport Machines" and has the right to choose what it is more profitable for it to do - engines for ships, diesel locomotives or power plants. Such a system now.

The shipbuilders own it. Back in 2007, the United State Shipbuilding Corporation (USC) was established in Russia with its headquarters in St. Petersburg. The new structure includes exclusively shipbuilding and ship repair plants, riveting and equipping hulls. Related companies were left out of the new company. Meanwhile, the Federal Ministry of the shipbuilding industry consisted of several numbered central boards. They united the most diverse enterprises, including specialized plants for the manufacture of pipeline and valves for ships and submarines. It is clear that such a bulky structure in the new conditions will not be as effective. However, the shipbuilding association should be self-sufficient. After all, automobile holdings, for example, have engine production today, but shipbuilders do not.

Perhaps there are other ways to solve the problems of shipbuilding, but one thing is clear - the current system works poorly. Therefore, the Commander-in-Chief of the Navy travels to the factories, pushing suppliers of defense orders. He is more interested in updating the Russian fleet. And the goals are marked serious. This year, the Russian Navy expects to receive about 50 ships and vessels of various classes. Among them are serious combat units - submarines and surface ships of the second rank. Among them is the ocean frigate "Admiral Gorshkov", which the Northern Fleet so waited for.

... In the year of the seventieth anniversary of the Great Victory, it is necessary not only to glorify and honor the heroes of the past war, but also to verify their present in their affairs. Once, while evaluating Dmitry Medvedev’s poorly productive presidency, I suddenly realized that he had been in the highest state post for more time than the Great Patriotic War had gone. What did you do? It is clear that during the war there was a different tension and mobilization nature of the economy. But still, all the same ... Today, too: shipyards are building battleships with an average displacement of nine years! But there were no fewer tasks before the fleet ...