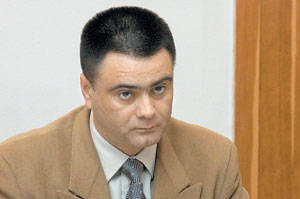 Scandalous armory the deal was not without intermediaries.
Moldovan Minister of Defense Vitaly Marinuta has to answer not only for herself.

On Wednesday, closed hearings were held in the Moldovan Parliament on the Libyan aircraft that arrived in Chisinau from Benghazi on September 12 and flew away with a cargo of weapons in an unknown direction. Defense Minister Vitaly Marinutsa admitted that “ammunition, shells and military equipment” from Moldovan arsenals were sold to Armenia. The expert of the Geneva Center for Democratic Control of Armed Forces, Viorel Cibotaru, this fact was confirmed by NG, noting that the scandalous deal did not go without intermediaries.

According to Viorel Cibotaru, “the equipment sold was overdue, and it is on the list, which was approved by the parliament under President Vladimir Voronin, somewhere in 2004 year”.

The list included what could later be “alienated by the Ministry of Defense”. Or easier - sold. The expert claims that the “last user”, that is, the same secret buyer, because of which the fuss was burnt out, is Armenia. It was to this country that, according to Chibotaru, it was established that the very ammunition and guns with which the storage period had expired were delivered. And also, according to the press secretary of the Moldovan Ministry of Defense, Alexander Josan, overdue “artillery and anti-tank systems”. What can you really believe in stories It’s not easy to figure out a ghost plane from Benghazi: all officials directly related to it are confused in the “testimony”, besides blaming each other.

Although, according to Viorel Cibotaru, the deal seems to be legitimate, “there is no embargo on the sale of arms of Armenia, as well as, incidentally, to Azerbaijan.” The only nuance, according to the expert, is that Baku may be offended. At a meeting of the parliament’s security commission, this was explained as follows: “There is a frozen territorial conflict in the CIS, and we would not want Moldova to be associated with a country that is selling or arming one of the parties involved in this conflict.” This was said by the former head of the Information and Security Service (NIB), a deputy from the Communist faction, Arthur Reshetnikov, adding that even written-off "weapons have the ability to shoot." OMEGA agency retells Reshetnikov: it is possible that the arms sold by Moldova may be intended for one of the parties to the frozen conflict between Armenia and Azerbaijan. It is clear what was meant by Nagorno-Karabakh.

Recall, September 12 cargo aircraft IL-76, en route from Libya, landed at the Chisinau airport. After refueling, he flew to a military airfield in Marculesti, where, as reported by the Ministry of Defense, he had to take a load of military equipment, which was owned by the national army, “acquired by some Latvian company registered in Riga.” After loading, the plane took off from Marculesti in the afternoon of September 13.

The Latvian Foreign Ministry denied that one of the Latvian firms received military cargo from Moldova, and Yerevan reported that the plane was Armenian. There was a noise. And Moldovan Prime Minister Vladimir Filat told reporters that he learned about the ill-fated plane from the media. In response, the head of the Ministry of Defense said that he had not taken a single step without the knowledge of the authorities. He was supported by former colleagues.

According to the ex-Minister of Defense Valeriu Pasat, according to Moldovan laws, the Customs Service can miss military cargo only if there is an appropriate government decree. It is clear that without a Prime Minister such a document can not appear. “And the head of the Ministry of Defense, Vitaly Marinutsa, didn’t prevaricate when he claimed that he had acted with the consent of the authorities,” said Pasat. At one time, he also participated in the conclusion of a deal to sell MiGs to the Pentagon. Then he was tried for this - under the Communists, he spent more than two years in prison and was subsequently fully acquitted. But, Valery Pasat told NG, “now the ex-prime minister Ion Chubuk said at the court that it was he (the prime minister -“ NG ”) who gave the relevant instructions and offered to judge himself.”

Former Defense Minister Valery Pleshka also doubted the ignorance of the head of government: all arms sales are controlled. And the former director of the Information and Security Service, Arthur Reshetnikov, stated bluntly that Prime Minister Filat was aware that the Ministry of Defense plans to sell weapons, but he tried to hide this information. He said that the hearings on the Libyan aircraft will be continued in the framework of the parliamentary commission on national security, of which he is a member, and in the framework of the plenary sessions of the parliament.

In the government structures of Armenia, NG did not comment on the “possibility of purchasing a batch of weapons”. From the counter-question of a high-ranking official: “So what’s the big deal about this?” Suggests the conclusion that he indirectly confirmed the deal.

The head of the Yerevan Center for Globalization and Regional Cooperation Stepan Grigoryan told NG that he doesn’t see anything extraordinary if Armenia has purchased equipment, weapons or ammunition somewhere abroad. “Bought and bought is in the order of things. All over the world weapons are sold and bought. Armenia is a sovereign state, no sanctions have been imposed, and the republic has the right to increase its defense capability by legal means. Especially in the conditions of the arms race, organized by Azerbaijan, which three or four years ago stated that it would bring its military budget to the entire budget of Armenia, and now it is actively buying different types of weapons in Israel, Pakistan and other countries. ” Therefore, according to Grigorian, if the information on the procurement by Armenia of arms from Moldova turns out to be accurate, it will only mean that Armenia is trying to protect its security and preserve the balance of forces in the region. “But I am sure that it is much more reasonable to continue peace negotiations on the Nagorno-Karabakh problem, stop the militarization of the region and follow the commitments made under the CFE Treaty,” Grigoryan told NG.

Official sources in Azerbaijan so far refrain from commenting on the situation “until all the circumstances are clarified.” In particular, the Deputy Press Secretary of the Ministry of Defense of Azerbaijan, Teymur Abdullayev, told NG that he has no information for comment.

According to the independent political scientist, Azerbaijani MP Rasim Musabekov, “for Azerbaijan, whose territories, despite four UN Security Council resolutions, 18 have been occupied by the Armenian armed forces for years, the sale of weapons to GUAM and itself is experiencing GUAM from the outside of separatism, is an unpleasant fact. Chisinau has no direct obligations to Azerbaijan not to sell weapons to Armenia, and does not violate the prohibitions of international organizations. However, Moldova should be aware that this fact will not remain unnoticed in Baku. Important is the fact that, according to the media, it was about expired shells and missiles purchased at bargain prices. They buy it, if I may say so, good either for resale to the regimes under sanctions (in the case of Armenia, this is Iran or Syria), or if they intend to start hostilities soon, as they keep the expired projectiles and missiles at a loss because of the need subsequently spend on their disposal. In any case, this deal should raise questions for the international community. ”

Armenia, like Azerbaijan, is not a combat zone, Nagorno Karabakh is considered as such. Yerevan, like Baku, is not subject to any restrictions on the supply of weapons and military equipment. In addition, they are not under UN sanctions. Therefore, any claims about the sale of weapons to the Republic of Armenia are more emotional than legal. Although it should be noted that the Constitution of Armenia states that it is responsible for the security of Nagorno-Karabakh. And no one will give 100-percentage guarantees that the weapons purchased by Yerevan will not be in Stepanakert or on the border with Azerbaijan. Moreover, in the republic they do not hide that from time to time the Armenian servicemen serve in the land of Karabakh, but at the same time emphasize that they or their ancestors are natives of this mountainous region.

What weapons Moldova could deliver to Armenia is an open question. But, judging by the set, which is in its Armed Forces, it can be anti-tank systems, anti-aircraft and artillery installations, and other types of weapons. True, the Armenian military, and in Moscow there are quite a few retired generals with Armenian roots, argue that Yerevan never buys technologically sophisticated weapons systems from third countries, only from the manufacturer and with a strict guarantee of its serviceability and combat effectiveness. Therefore, neither the Igla MANPADS, nor the Fogot or Sturm ATGMs, which are in service with the Moldovan army, could buy them. The only exceptions are cartridges and ammunition for 152-mm and 122-mm howitzers. Their production in peacetime by small batches of Armenia is too expensive, it is easier and cheaper to buy abroad.

True, some of the generals said that Armenia was hardly the ultimate buyer. Just those who nod toward Yerevan are hiding behind them. Could, with the blessing of NATO and the United States, supply weapons to Syria to support and equip the opposition forces Assad. It would be more expensive for Moldovan officials to admit this. So they nod in the direction of Armenia. Another option: it is possible that through Moldova it sells surplus Soviet weapons and Romania. She joined NATO, she needs to change her weaponry to Western models, and Chisinau, as a transit point or as a cover, is quite comfortable with Bucharest.

One way or another, but the questions remain with Moldovan journalists. Artem Varenitsa, deputy editor of Kommersant Plus, noted “NG that several transport workers go up from the airport in Marculesti every day — where and what they carry is not known.