The region of the Middle East has passed one of the points of no return. 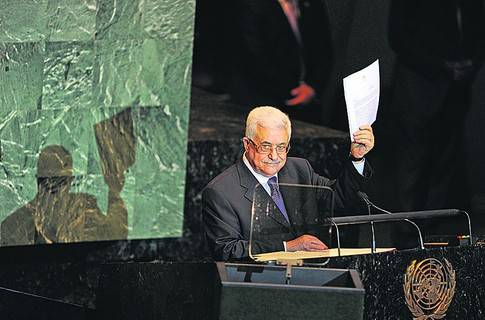 The region of the Near and Middle East has passed one of the points of no return. Palestinian leader Mahmoud Abbas nevertheless submitted an application to UN Secretary-General Ban Ki-moon to join the Palestinian Authority in this organization. The UN Secretary General, according to the regulations of the United Nations, accepted it and promised to transfer it to the Security Council. Now the UN Security Council must consider it and make its recommendations to the General Assembly.


In addition, the document filed by Abbas contains a requirement for the withdrawal of the Israeli armed forces from the lands that Israel occupied during the Six Day War 1967 of the year and even earlier, after the division of British Palestine into Jewish and Arab parts.

Outwardly, the very formality of this action, in fact, is a significant event of great importance. Consciously or not, the Palestinian leadership has launched a real avalanche, an irreversible process. And now, regardless of the UN decision to satisfy the Palestinian bid, the existing equilibrium of the Middle East region, the already undermined so-called. "Arab Spring", is able to collapse. In addition, it must be borne in mind that all this is happening against the background of the war in Libya, the difficult situation in Algeria, the unrest in Morocco, Egypt, Syria, the intensification of the imperial ambitions of Iran and Turkey, and the new “hitting” of the USA on Pakistan.

The recognition of Palestine by the world community will immediately call into question the existence of Israeli settlements in the “occupied territory”, according to the Arabs. But this is only a very small part of the problem that will overwhelm the Jewish state. The Arab states, which are now universally in favor of recognizing the right of their Palestinian compatriots to a full-fledged state, recognize it, and some will be obliged to start the procedure for concluding agreements, including military, allied, because too many commitments were made by them earlier .

And this means that after the conclusion of such agreements, internal Israeli-Palestinian conflicts will come to a different level. So, if Israel responds to another terrorist act or a rocket attack with blows from its air force, the Arab and other Islamic states will be forced to respond. For example, the rapidly Islamizing Turkey, and its leaders have already made so many loud statements that there is no turning back. Yes, and Egypt can not stay away.

If Palestine is refused, the passions are already such that a rebellion of the Palestinian Arabs is very likely.

The Anglo-Saxons quite confidently lead the collapse of the Middle East region. And they can go to both scenarios: by imposing a veto on the decision of the UN Security Council, causing an explosion of discontent, which will be channeled against Israel and the Jewish people. Or, having made a sad expression, “wash their hands” - and, apparently, such a sacrifice can be made, Jews and Israel will be made “scapegoats”.

It is necessary to take into account the factor that the Palestinian problem includes the question of Jerusalem. And this is a landmark city for Jews, Christians and Muslims ... Immediately I recall the biblical prophecies of the "last battle."

We are in Yandex Zen
Slippery Ban Ki Moon
The Palestinian problem and the question of the survival of Israel in the future
4 comments
Information
Dear reader, to leave comments on the publication, you must to register.