Who will outwit someone in a hidden game 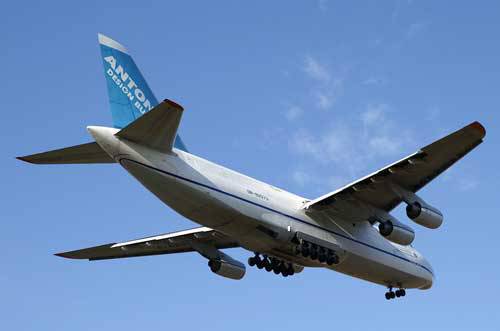 Last week, a rather interesting report came from California: a little-known unprofitable company US Aerospace announced it had signed a partnership agreement with Antonov State Enterprise, providing for participation in a tender for the US Air Force to supply 179 to new-generation tankers worth $ 35 billion.

This tender has already turned into a real epic. It all began in 2002 with the intention of the US Air Force command to partially purchase, partially lease Boeing’s KC-767 tankers to replace the KS-1957 aircraft operating from 135. However, the lack of an alternative to the upcoming contract angered competitors, an investigation was initiated that revealed the corruption component of the agreements between the Air Force and Boeing.

In 2007, a tender was announced for a new generation KS-X tanker program, in which, apart from the outrageous company Boeing, the Northrop Grumman consortium and EADS with the KC-45 aircraft, built on the basis of European Airbus A330 MRTT tanker, took part. The winner was KC-45. However, Boeing appealed against the clearly unpatriotic choice of the military, who preferred the product of the Old World. And in September, 2009 was followed by an announcement of a new phase of the long-suffering tender. 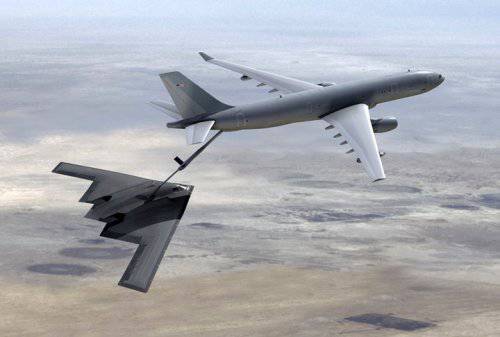 A45 based KC-330 refueling aircraft

At first the participant was one - the same KC-767. Northrop Grumman and EADS this time did not want to offer the KS-45, stating that the technical requirements were designed so that the aircraft could be won by the Boeing tanker. However, in March 2010, EADS put KC-45 on its own, asking to postpone the deadline for submitting applications for participation in the tender from May 10 to July 9 in order to prepare the necessary technical documentation. 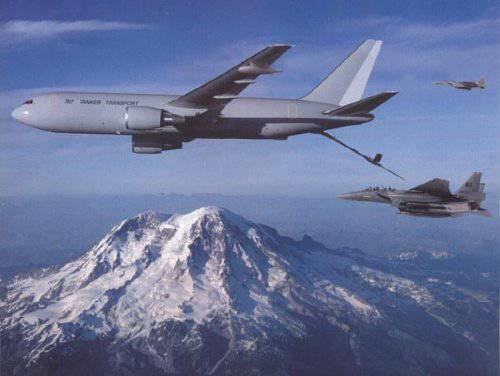 And now “Antonov” is ready to join the tender. It should be noted that John Kirkland was one of the newsmakers on this topic. His name is familiar to attentive observers. It was he who in March 2010 of the year announced that the United Aircraft Building Corporation intends to submit to the tender for the KS-X program the aircraft under the designation IL-98, created on the basis of the IL-96 airliner. The KLA denied Kirkland’s statement without delay, and the documents that were later transmitted to them by the media qualified as fake. 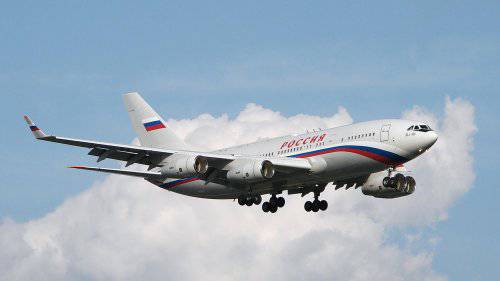 On the business reputation of Kirkland in the Western media there is information that puts it in a rather unattractive light. And the company itself is not an example of well-being. She completed 2009 year with a loss of 14 million dollars. Lack of liquidity reaches 28 million dollars. The company urgently needs working capital or re-issue of debt.

At the tender for the KS-X program, the American-Ukrainian consortium initially proposed three aircraft variants: An-124 itself, An-122 and An-112. From what was said by the representatives of the US Aerospace, it can be concluded that the An-122 is a twin-engine version of Ruslan, and what the An-112 concept represents is not entirely clear. It is only known that we are talking about an aircraft based on one of the existing platforms of the Antonov company, which fully satisfies all the requirements of the KS-X program. Moreover, US Aerospace intends to nominate one of these non-existent machines for the as yet undeclared tender for the KC-Y program, during which a replacement for the KS-10 tanker should be selected.

In the context of events related to the alleged participation of Ukraine in the tender for the COP-X program, several more News. First, we should recall the May statement by Russian Deputy Prime Minister Sergei Ivanov on plans to create a Russian-American joint venture that will build the modernized An-124s in the United States. In Kiev, this information was treated, to put it mildly, unfavorably, noting that it was not planned to transfer any production technologies of Ruslan abroad. Later, the issue of joint Russian-American aircraft production was also raised during a visit to the United States by Russian President Dmitry Medvedev.

In May, according to the president of the United Aircraft Building Corporation Alexei Fyodorov, it became known that UAC and Antonov State Enterprise agreed to set up a joint venture for the procurement of materials, components, sales and after-sales service of the An-140, An-148 and An-124 aircraft. Ruslan. It is assumed that the joint venture will be born before October 1. To do this, the Ukrainian corporation must buy back half of the shares of UAC - civilian aircraft for 12,5 million rubles.

So what does it mean behind the news of the signing of a partnership agreement between US Aerospace and Antonov SE and their participation in the tender under the KS-X program?

Apparently, US Aerospace uses Antonov and all this history with a tender in the hope of solving their own financial problems: to attract money from the budget to correct their difficult economic situation. The favorable reaction of a certain grouping in the American administration to the appearance of such a "participant" can be explained by the desire to knock down arrogance from Boeing, which until now felt himself to be the master of the situation in this tender, and at the same time the price of its products. That is, by definition, there is no question of any real possibility of supplying aircraft from the Ukrainian developer of the US Air Force. For Antonovites, this option is generally non-profitable, but also a win-win, since it can serve as a kind of trump card in negotiations with the UAC on unification, as well as a way to once again promote their company as a design team with undeniable competence in the creation of multi-purpose aviation platforms.

It is worth noting the fact that the Antonov GP has not only a ready-made prototype of a tanker aircraft, but even such a project, not to mention the prospects for its full-fledged production. Meanwhile, four KC-767J have already been transferred to Japan, as many more cars will be built for Italy. Australia, United Kingdom, UAE and Saudi Arabia have ordered a total of 28 European tankers Airbus 330 MRTT.

In favor of the fact that “Antonov” in this case (unlike the KLA) was not used in the dark, the following fact says: the firm’s management did not comment, but did not refute the information about its participation in the KS-X program. Moreover, Vyacheslav Boguslaev, President of Motor Sich OJSC, where D-18 engines were manufactured for An-124, told the Kommersant newspaper that he was close to this negotiation process.

One would assume that an incredible thing happened under Barack Obama and in the USA they decided to really try to admit to the tender a company that can make the car that the US Air Force needs for less money than Boeing and EADS. And at the same time, having begun cooperation with the Antonov state enterprise, in the long term to move Russia away from the An-124 production project in the USA, which is so in demand for strategic military transport in the interests of the NATO contingents fighting in various hot spots. Moreover, Boeing, according to some sources, is interested in the production of this aircraft. However, further events show that it is fantastic. 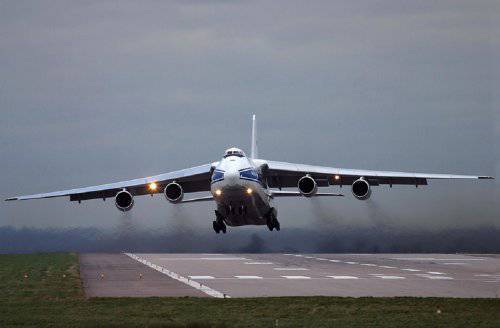 After US Aerospace sent a request for information on the KS-X program to the US Department of Defense, the Pentagon issued a statement of duty: it seeks to hold a tender in an open, equitable and transparent process and welcomes any new participant. Then US Aerospace appealed to the Ministry of Defense with a request to extend the deadline for submitting applications for participation in the tender for KC-X by 60 days. However, the Pentagon rejected this request. After that, the representative of US Aerospace said that only one aircraft would be put up for the competition - the An-112, which no one had heard before. The cost of one car in accordance with the proposal of the company should 150 million dollars, and the entire contract the US-Ukrainian consortium is expected to perform for 29,55 billion dollars.

Meanwhile, after the deadline for submitting bids to the tender, Boeing reported that it offers the US Department of Defense an aircraft that fully complies with all 372 requirements of the KS-X program, more advanced than the tankers ordered by Japan and Italy and superior in its characteristics to its European competitor. According to the Boeing information, the KC-767 in its latest configuration will be 20% cheaper and 24% more economical than the Airbus 330 MRTT. He will receive a "glass" cockpit, the same as the Boeing 787 Dreamliner, and the "philosophy" of the avionics machine is built in such a way that it leaves the pilot the real captain of the aircraft, preventing computer systems from restricting combat maneuverability. This is a clear attack towards Airbus, since the European manufacturer's avionics avionics largely controls the actions of the crew, thus trying to prevent undesirable consequences of improper actions by pilots.

It is reliably clear: around the tender for the next generation tanker, a lively undercover struggle takes place, and its outcome is not primarily determined by the performance characteristics and cost parameters of a particular aircraft. The main factor influencing the decision-making seems to be a political game with an economic bias, each participant of which tries to quietly use the partner for their own selfish purposes. The only question is who will outwit whom.