Sputnik International: Ukrainian neo-Nazis communicate with the United States as an old ally

March 18 2015
47
Sputnik International published an article stating that Ukrainian neo-Nazis are asking for military assistance from the United States as their longtime ally. 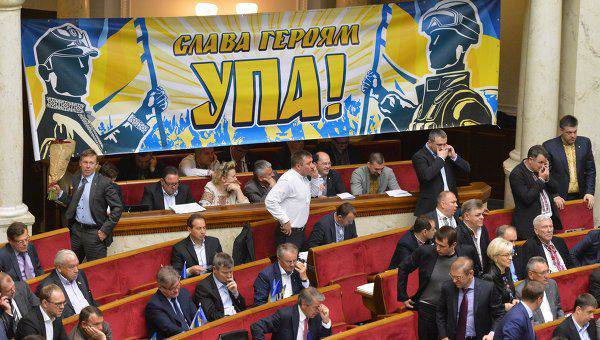 History repeated - 17 March 1951, the Ukrainian Insurgent Army (UPA) also asked the US for support in the fight against the USSR, the newspaper notes.

“After the defeat of Nazi Germany in 1945, many Ukrainian collaborators joined foreign sabotage groups and intelligence services, dreaming of revenge. The organization of Ukrainian nationalists (OUN) planned to create a dictatorship in exile that would one day be moved to Ukraine, ”- quotes an excerpt from the research of the Swedish-American historian Per Anders Rudling RIA "News".

After the beginning of the Cold War, Western intelligence agencies managed to recruit many leaders of the OUN, including Nikolai Lebed, who established contacts with US intelligence in 1945. Although the CIA described him as “a famous sadist and accomplice of Germany,” nevertheless Lebed was considered a valuable agent.

In addition, Rudling noted that one of the CIA agents said that in Ukraine "some forms of nationalist sentiment persist, so American intelligence agencies need" to support them as weapon in the cold war.

Therefore, after the collapse of the USSR, the Ukrainian authorities did not have to create new national myths from scratch, they could “import ready-made concepts developed by the Ukrainian diaspora,” Rudling notes.