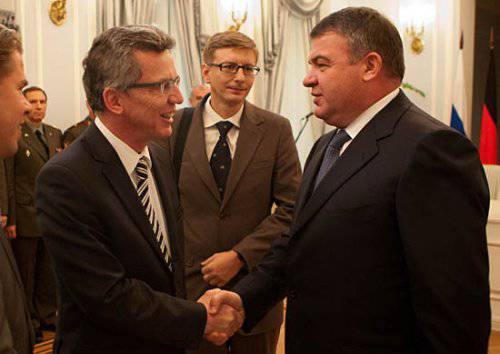 Last week, the head of the Bundeswehr, Mr. de Mezieres, visited Russia, who met with his Russian counterpart, Defense Minister Serdyukov. What did the heads of the military departments of Germany and Russia talk about at this meeting?


It turned out that de Mezieres wishes to offer Serdyukov to reform the Russian army. Mezieres is aware that the Government of Russia is planning to spend several hundred billion euros for the reform of its armed forces over the course of nine years (until the end of 2020). Moreover, this amount is calculated on the purchase of new military vehicles and equipment. Other funds will be invested in the army that will allow the soldiers, officers and generals to retrain tactics of combat operations, change the life of the soldiers, and improve the diet. It has already been decided to conduct an audit of the Russian military regulations, according to which the Russian army will receive a new set of rules that meets all modern challenges.

Apparently, in Germany, they heard about the immense colossal injections into the Russian army and decided not to stay away from such a tasty multi-billion dollar pie. Let's try to figure out why the Bundeswehr so ​​suddenly needed to support the army or anyone, but a real potential enemy. Let's not forget that Germany is a member of NATO.

In this regard, there are several basic judgments. Consider the first of them. According to him, the German military department decided to assist in the reform of the Russian army only because it wants to warm up on this. After all, an agreement was reached at the bilateral meeting that German firms would supply unique training complexes to Russian troops, thanks to which the Russian military would be able to work out the technique of fighting without any danger. This contract alone implies an investment of up to several hundred million euros in the products of German manufacturers of military training equipment from Russia.

In another opinion, the interest of the German side is not limited only to economic benefits, which is, of course, decisive. Some Russian and German analysts say that Germany does not want, even being a member of NATO, to limit cooperation with Russia. Why? Yes, if only because more 70% of the population of Germany does not see further prospects for Germany’s membership in NATO in the current form of the Alliance. Many ordinary Germans understand that today, NATO is the conductor of the will of the United States, and therefore it can drag Germany into various kinds of military adventures. At the same time, the financial and economic issues of Germany’s membership in NATO are also decided purely in the interests and interests of the United States. Often Germany is on the sidelines in sales weapons NATO partners. The leading role here was assumed by the same United States and Great Britain. In this situation, Germany rightly decides for itself to find other partners, cooperation with which will be of a strategic nature. At the same time, the German authorities are far from any prejudice about the condemnation of their actions by Washington or Brussels. As a matter of fact, Berlin may not give a damn about what the western side will say, since the economic benefits and the real prospects for close contacts with Russia here can play an important role.

The following words can be cited as an example of another judgment: Germany “probes” the internal Russian soil in the field of armaments in order to make an objective conclusion about the course of rearmament of the Russian army. If you adhere to this judgment, then the reform of the armed forces of Russia will take place under the vigilant control of Germany, as one of the allies of the United States. This means that every step of the Russian military will be monitored by the West so that any changes will not go to the detriment of European and American security. In this case, Germany, helping Russia, wants to see with its own eyes what these Russians are going to arm themselves with, and how this can threaten the borders of the European Union. I do not want to draw analogies with the pre-war years, when the USSR and fascist Germany also very actively cooperated in the military sphere, but where do you get from the historical fact ...

As a result, having considered the three main versions of the "fraternal" assistance to the Russian armed forces from Germany, one can say that any cooperation should take place on mutually beneficial terms. If the Russian side really wants to reveal all its cards, then this can be regarded not as a modernization, but as a threat to national security. If we are talking about the economic background, then we should not forget that in Russia any cooperation with foreign countries turns into a bureaucratized cumbersome mechanism that can crush every reasonable initiative of each of the parties.

I want to believe that the close contact of the military departments of our countries is an open interaction, which will result in a real restructuring and modernization of the Russian army without compromising our security.

We are in Yandex Zen
New propaganda center of the Bundeswehr
The head of the DPR visited Gorlovka, the cadets took the oath, and in the "Olympic" hosted the forum "Donetsk Republic"
16 comments
Information
Dear reader, to leave comments on the publication, you must to register.