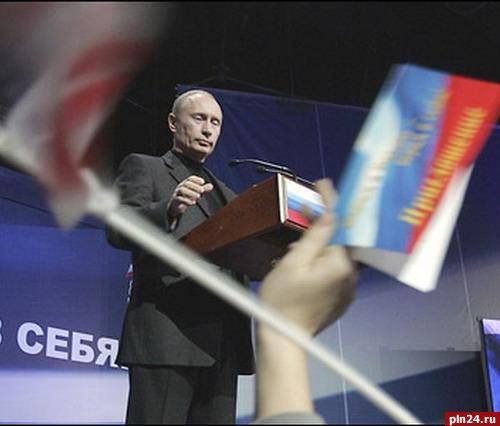 A decision was taken on the third term of Vladimir Putin and the premiership of Dmitry Medvedev. In addition, at the pre-election congress of United Russia at Luzhniki several more important statements were made concerning the future of Russia.


Prime Minister Vladimir Putin made several statements on the forum that are significant for Russia and its people. First of all, Putin said that in 5-10 years, the Russian Federation must completely re-equip the army and navy. Given the situation in the world, which resembles the events before the world war, this task becomes a priority, as far as the survival of Russia is concerned.

Speaking of gross domestic product (GDP), the prime minister set the task of increasing the rate of economic growth in the state to 6-7% per year and for the five-year period to introduce the Russian Federation into the top five most powerful economies in the world. In connection with these plans, Putin, in particular, made a promise that new laws that affect business interests will be discussed with Russian entrepreneurs.

Vladimir Putin said that over the next 5 years, Russia will achieve food security in the main types of food.

A few promises in the social sphere were made: write off erroneous tax debts from citizens in the amount of 30 billion rubles; lowering mortgage rates in the coming years to 6,5-7%; the establishment of a social norm of consumption of communal resources, above which the tariffs will be higher - this should push people to thrift and introduce new technologies; It is said that taxes on the rich should be higher than on other citizens. The land issue - vacant lands that are in federal ownership must be transferred to cooperative development for all state employees, without exception: for teachers, university professors, cultural and social workers, doctors.

This stagnation of pure water, the current political "elite" was unable to push any new significant figure, so the previously chosen course to consolidate the neo-colonial status under the sign of the energy "great power" will continue.

Vladimir Putin will face several important tasks, and there is almost no doubt that he will be president (something out of the way must happen in order to break this scenario). The entire current opposition is “pocket” in nature, having neither the desire, nor the will, the concept, nor the real leaders to change the situation.

Thus, the current Russian system can be brought down by external waves - from the collapse of the European Union, as the main market for Russian raw materials, to the beginning of the world war in the south, the centers of which have already appeared. In addition, there is a danger of the fall of the Middle Kingdom. Chinese civilization in its stories, I have never been able to overcome the cyclical nature of my development, flowering has always been replaced by stagnation and ruin. At present, Russia is not able to solve any of these global problems, we can only be observers. Keep a distance and not intervene, will not work, we are in the crossroads of all three problems.

And the internal problems are not solved: the Russian people continue to die out, the migration policy threatens with major riots and pogroms, the population continues to be divided into a class of new masters and “slaves”, national resources are exported abroad, a new wave of privatization can leave citizens without forests strategic enterprises, infrastructure requires huge investments - the Soviet margin of safety at the end, etc.

And most importantly, there is no big idea voiced, a national concept of development that would be able to unite the majority of the population in the face of external and internal threats. The development of psevdopravoslavia only adds problems, but does not solve them. Therefore, the alienation of the population from power and bitterness will only grow.

Putin himself announced the result - 25-year-old collapse of our civilization, we just want to enter the top five economies in the world (!). Under the last emperor of the Romanov dynasty, we entered the 5 of the most powerful great economic powers, under Stalin we became the second superpower in the world (according to a number of indicators and the first). And now we just want to enter 5-ku, that is, we collapsed deeper than we were a hundred years ago! Nuclear only weapon, space technology, the remnants of the Soviet industry remind us that we are a great power.

In the end, this all means the complete inability of Russia and its management class to adequately counter external global threats and catastrophes. And we will have to pay once again the enormous bloody price for the new salvation of the Motherland - and all because of the inhuman greed and selfishness of the current "elite". Let's hope that the Russian land has already given birth to a new Stalin or Ivan the Terrible, who will be able to lead the process of restoring our empire.

We are in Yandex Zen
What we lost
Putin and Stalin. Comparative analysis
51 comment
Information
Dear reader, to leave comments on the publication, you must to register.