British Prime Minister Cameron promises an "Arab Spring" to Iran. And Mahmoud Ahmadinejad continues to cut the truth of the uterus 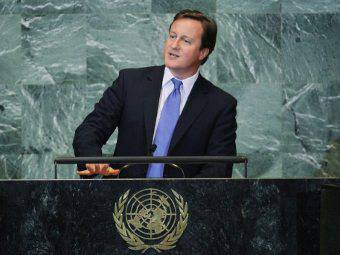 British Prime Minister David Cameron 22 September, speaking before the UN General Assembly, lashed out at Iranian President Mahmoud Ahmadinejad who spoke before him and wished the Arab Spring to come to Iran. The UN high rostrum was used to express unequivocal threats against sovereign states.


According to the British Prime Minister, Ahmadinejad rules a state in which, although “there is something like an election,” the media is tough, freedom of speech is suppressed, violently dispersed protests and “torture those who fight for a better future.”

The head of the British government believes that the people's revolutions in Tunisia, Egypt, Libya should have pushed the Iranian, like the Syrian authorities, towards “democratic reforms” in their countries.

In addition, during his speech, the Briton spoke positively about the alliance of Arab states and the Western world, in particular, about the operation of the North Atlantic Alliance in Libya. “Now we must not loosen our grip,” said David Cameron, saying that Western countries should support those peoples who are striving for democratic change and freedom. Thus, the world was sent a clear signal that the "modernization" of the planet is not completed. And so that Russia does not fall into the number of countries where “humanitarian operations” are necessary, if any of the 180 peoples and ethnic groups of the Federation, following the example of 90’s Chechens, express a desire for “freedom”, it is necessary to strengthen the work to strengthen the country's defense.

In his speech, he raised several important issues. Ahmadinejad devoted a notable part of his speech to the events of September 11 2011. In particular, the Iranian president noted that as an engineer (the head of Iran had successfully graduated from the Tehran University of Science and Technology with the qualification of a transport engineer), that airliners "could not cause the collapse of the twin towers." And he accused the White House of this large-scale terrorist attack, which used this event as a pretext for the invasion of Afghanistan and Iraq.

Although, this time the President of Iran paid much more attention to the actual problem of the growing global crisis. The planetary crisis, according to the Iranian leader, is caused by the actions of Western countries and, first of all, the United States of America, which printed a huge amount of dollars not secured with gold.

As a result, according to Mahmoud Ahmadinejad, all other states are suffering, which, moreover, were previously subjected to colonial exploitation by Western countries. And therefore, the head of Iran demanded from the Western world material compensation to all affected peoples and countries.

Ahmadinejad has traditionally not forgotten about the "Zionists." According to him, the West created such a situation in the field of the information field that any doubts about the Holocaust became impossible. Western countries pay tribute to the Zionists. "Zionism for the West is a sacred cow." In addition, the Zionists control the states of the West, continued to disrupt the secrets of Iranian politician.

One of the reasons for the active offensive of Ahmadinejad was the fact that recently US President Barack Obama announced that the world community should increase pressure on the Islamic Republic of Iran for the fact that Iranians continue to develop an atomic program.

Therefore, Mahmoud Ahmadinejad harshly criticized the UN Security Council, which has repeatedly introduced economic sanctions against Iran. According to the Iranian president, the composition of the UN Security Council is "unjust and unequal, it needs to be reformed." In principle, this idea is not new and has already been expressed many times - proposals have been made to introduce new countries into the Security Council - Germany, India, Brazil, and South Africa. And the war in Libya showed that the Security Council not only cannot prevent a conflict, but also provokes even more bloodshed by its actions.

In addition, Ahmadinejad expressed the correct idea that the leaders of Western countries do not tolerate any questions, and instead of explaining their mistakes, they always make claims. Western delegations “confirmed” his words by not waiting for the end of his speech, responding to the accusations, and in “protest” left the conference hall.

Interestingly, the Iranian leader not only criticized, but offered. The global community needs fundamental change. “Marxism, liberalism and humanism are not suitable for this,” said the Iranian politician, and called for relying on traditional values, following the example of Iran. “We can offer a model for the development of the whole world,” the leader of the Islamic Republic actually boasted.

It is important to note the fact that despite the irritation of the countries of the West, representatives of many countries of the world supported the speech of Mahmoud Ahmadinejad, expressing gratitude to him with loud applause. Indeed, in reality, the Iranian politician said what others are afraid to say openly, fearing to incur the wrath of the West, the countries of the Sc. "Golden Billion", those who consider themselves to be powerful of this world.

Such an open speech also added political points to Ahmadinejad himself inside an Islamic country, further enhancing the authority of the IRI among other states, including Muslim ones. Iran is currently a candidate for leadership in the vast Islamic world. This performance added points to the country, showed her position as a potential leader of Islamic resistance to the dictatorship of the West. Who else besides Tehran can afford to talk in a similar tone with Western leaders? Only the charismatic leader of Venezuela, Hugo Chavez, but he is not yet recovered from a serious illness, and his country does not claim leadership in the whole world, the Islamic civilization of the planet. 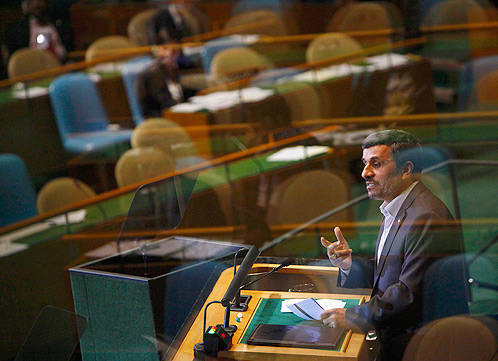 We are in Yandex Zen
Geopolitical mosaic: foreign media started talking about Russian chemists in Damascus, and Mahmoud Ahmadinejad said that Iran is a nuclear power
Iranian parliamentarians set up Ahmadinejad?
8 comments
Information
Dear reader, to leave comments on the publication, you must to register.