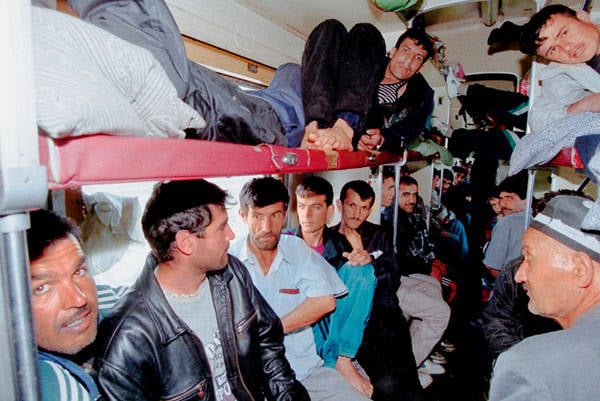 The process of assimilation of the indigenous peoples of the Russian Federation is accelerating. Especially this process threatens the Russian people, who in recent decades have largely lost their "I".


Since the beginning of 2011, 10 millions more have entered Russia. This was reported by 20 in September, Deputy Director of the Federal Migration Service Ekaterina Egorova. But you still need to keep in mind those who the FMS could not take into account. And this is against the background of another bad news. According to the same Federal Migration Service, the permanent outflow of the indigenous population is still observed from the Russian Federation: for example, over the past three years, 145 thousands of its citizens have left Russia forever.

If we add to this information more information about the continuing reduction in the number of the Russian population (which occurs due to the extinction of a number of indigenous peoples of Russia), then the situation will turn out to be truly sad.

In the ideal case, this information should have served as a clear signal to the authorities of all levels that it is impossible to continue this way. This is a “verdict” to the entire domestic policy of the authorities, including migration policy. The reason for decisive measures to save a sinking ship with the name "Russia".

But any sensible person knows that the logic of the Russian authorities is very different from the everyday wisdom of ordinary citizens: so, if people were given the floor, then pedophiles and other evil spirits would be hung and shot in the squares following the example of Iran and China. They receive terms of several years from us and will soon be released with a “clear conscience” for good behavior. Therefore, the FMS sees a way out of this situation in the future influx of aliens. It is believed that this is done in the interests of the Russian economy. According to the official, Russia can only rely on migrants, mainly from the CIS countries, they come 80% of all newcomers.

The Federal Migration Service of the Russian Federation is not alone in this opinion: the idea of ​​“saving” our Motherland through the influx of foreigners has firmly established itself in much more important cabinets. Recently, Secretary of the Security Council of Russia Nikolai Patrushev scared Russian citizens with the following perspective: the number of the working-age population of the Russian Federation before 2025 will fall by at least 10 million people and, at the same time, the reserves for raising the level of economic activity in the older and younger age are practically exhausted. And he offered to think about new solutions and methods for attracting highly skilled labor to Russia, representatives of the “middle class”, which should help in the “modernization” of the Russian Federation.

True, the head of the Security Council did not answer the question of what the masses of "highly qualified specialists" are going to attract. The current Russian economy has long been distinguished by the fact that the manufacturing sector continues to shrink and the service sector is growing. And the non-manufacturing sector, as a rule, does not place high demands on the quality and qualifications of the workforce. The economy of the "pipe" does not need a lot of highly qualified specialists.

If the current Russian authorities wanted to solve the problem of the extinction of the Russian population, they could take other measures. For example, to tighten the migration policy, to accept only those who are really needed for the national economy, after a hard exam on the knowledge of the Russian language, Russian culture. At the slightest violation - expulsion, without the right to re-enter Russia. Russians and other representatives of indigenous peoples (Mordovians, Tatars, Chuvash, Komi, etc.) and their descendants in the second and third generation should receive the right to preferential citizenship of Russia. To solve the labor shortage at the expense of reserves in the form of unemployment, increase the life expectancy of Russian citizens, reduce their mortality, increase the birth rate program, increase the level of security in the country - thousands of able-bodied citizens die every year at the hands of gangsters, on the roads, etc.

Ctrl Enter
Noticed oshЫbku Highlight text and press. Ctrl + Enter
We are
Missed chapter "Strategy-2020"“You do not need to conquer. You will free the land yourself. ”
15 comments
Information
Dear reader, to leave comments on the publication, you must to register.