March 16 2015
30
Ukrainian Foreign Minister Pavel Klimkin gave an interview to the newspaper Kommersant. During the interview, Mr. Klimkin talked about what prevents Kiev from starting a dialogue with Donetsk and Lugansk about holding local elections in the framework of the so-called decentralization of power in Ukraine. Klimkin said that the Ukrainian army is suffering losses after the entry into force of the cease-fire agreement. According to Klimkin, 70 people died. At the same time, Klimkin says nothing about the militia and civilians who died at the hands of the Ukrainian punitive units after all the same announcement about the beginning of the cease-fire regime. 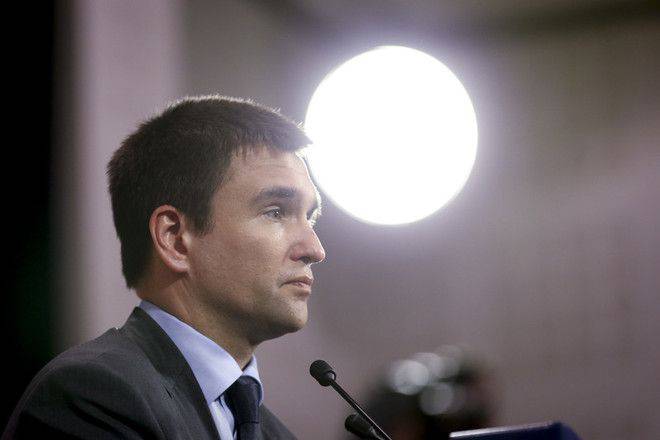 Klimkin said that the enemy did not remove heavy equipment from the front line, but “hides it in hangars and at abandoned factories”, and “does not allow representatives of the OSCE mission there”.

Klimkin:
Observers are not allowed into many districts of Donetsk and Lugansk. In general, initially Donetsk, Lugansk and the Russian side insisted that representatives of the OSCE simply come, fix the fact of withdrawal of heavy weapons - that's all. But these weapons can be hidden. You can change old weapons to new ones. And this is a new hide. Moreover, it can be safely done at night when the OSCE does not carry out its mission.

At the same time, the OSCE representatives themselves do not say a word about the fact that the militias do not allow them somewhere, which is shown by Mr. Klimkin’s lies. Obviously, Klimkin is trying in every way to justify the acquisition of Kiev weapons and the possibility of an early resumption of large-scale bloodshed in the Donbass.

Against this background, Klimkin said that the tripartite group was discussing the issues of holding local elections in Donbass, but noted that such elections would be postponed, since Kiev is not ready to support the results of the citizens' will in those areas where Ukrainian channels do not broadcast. In other words, until Kiev launches its propaganda in Donetsk and Luhansk, there is no point in voting ...

Moreover, Klimkin declares that only those parties that are officially registered in Ukraine will participate in the elections. And this, for example, “Right Sector”, “Radical Party Lyashko”, “Freedom” of the Yagsenyuk, etc. “People’s Front” Yatsenyuk and others. Will Donetsk residents and Luhansk residents go to such elections where they should vote for those who gave orders to bomb their homes and kill their loved ones?

According to Petro Poroshenko, "certain areas of the Donetsk and Lugansk regions" will receive a special status after the local elections. But there is no election, since Donbass, to put it mildly, is sick of the Kiev parties ... The vicious circle in which Kiev is trying to drive the Donbass and gain time.

Ctrl Enter
Noticed oshЫbku Highlight text and press. Ctrl + Enter
We are
Tanks and roses. Donetsk lives in a fragile truceReports from the militia of New Russia for 7 September 2014 of the year
Military Reviewin Yandex News
Military Reviewin Google News
30 comments
Information
Dear reader, to leave comments on the publication, you must to register.