Sergey Gurkin. Five types of heavy weapons that the Kiev authorities did not take 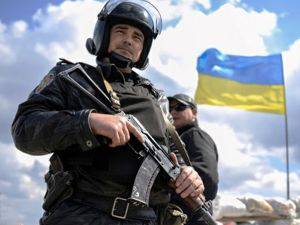 On Tuesday, Petro Poroshenko said that the Ukrainian armed forces had withdrawn the "lion's share" of heavy weapons and that the "militants supported by Russia" did the same. Thus, the Minsk agreements with a squeak, but still seem to be implemented, and it can be hoped that the conflict can be resolved without further use of force.

Of course, the phrase “the lion’s share” attracts attention. The President of Ukraine does not hide the fact that Kiev doesn’t fully withdraw heavy weapons. This explains the continued (albeit reduced) shelling and casualties. But the main question is that salvo-fire systems and heavy artillery are not the main types weapons, which should take the Kiev authorities. There are at least five more dangerous ones.

1. Type of armament: massive propaganda salvo. The militias are called "militants", and they are supported, supposedly, not by the locals, but by "Russia". The resistance of the militias allegedly brought to Ukraine from the outside and is not an expression of the will of the local population.

The number of units in service: countless; first of all, the statements of the first persons of the state, as well as the main mass media.

Method of application: daily mantra that resistance is inspired from the outside; total disregard for the fact that it is an expression of the will of the locals.

The consequences of the application: the sincere conviction of the speakers themselves, as well as parts of the western electorate, that the problem is external; no less sincere conviction of the inhabitants of the eastern part of the country, who know the real situation, that these statements are a lie and that Kiev is not ready for a conversation with its own population.

Method of withdrawal: the termination of the use of such rhetoric; recognition of the fact that the legitimate demands of local residents were regularly violated and continue to be violated.

2. Type of armament: constant lie armored personnel carriers. Since the beginning of protest actions on Independence, every action of the former opposition and the current government has been commented falsely (“peaceful meetings” - overthrowing power with arms, “willingness to compromise” - violation of all agreements, “people's will” - suppression of protest, “prosperity” - economic abyss, "European values" - censorship, intimidation, monotony).

The number of units in service: the first persons of the state, politicians and the media, competing in "patriotism".

Method of application: self-confident speaking of a deliberate lie; citizens should be convinced by the regular repetition of this lie and the suppression of other opinions, as well as the constant appeal to the fact that “Motherland is in danger” and therefore censorship and monotony are necessary.

Consequences of the application: the presence of a large number of citizens who believe in this lie; their perplexity as to why the new honest power brought so much bad and so little good; the presence of no fewer citizens who can no longer believe so often lied to political figures, whatever they may say.

Method of withdrawal: it takes time for the same politicians and the same media to practice speaking the truth. This will help restore confidence in them and create the necessary conditions for the dialogue.

3. Type of weapons: BMP denial historical, ideological and cultural reality. Ukraine, 80% of whose citizens speak Russian, is allegedly not only not part of Russian culture, but has always been suppressed by this culture. Russia allegedly was not the only country supporting Ukraine 23 of the year before Maidan, allegedly not a country with which Ukraine is connected by millions of threads; the position of the Russian state (inventing an external enemy is a lie and an insult to a huge number of people in Ukraine) is allegedly not shared by the citizens of Ukraine.

The number of units in service: individual "historians" and "cultural studies", as well as enjoying the fruits of their "research" policy and the media.

Method of application: the artificial creation of a "new reality", whose artificiality is not hidden, and which "must" be created because the Russian-speaking "have become enemies."

Consequences of application: artificial inflation of “patriotism” (“Ukrainians are good because they are Ukrainians”; self-identification: “Ukraine is not Russia”); the response of citizens who retain common sense (“if the Ukrainians are the enemies of the Russians, then we are not the Ukrainians”).

Way of withdrawal: a return to the harsh reality; the solution of political issues is not based on the fictional concept “Ukraine is not Russia, but all citizens of Ukraine who disagree with this are mistaken”, but on the basis of respect for their position.

4. Type of weapons: assault thimbles. The new government signs the democratic papers with one hand, and the other finances the nationalist gangs, which are engaged in aggressive terror against the dissenters. The number of units in service: several oligarchs with well-known names, several members of the government, a number of media outlets, several “politicians” earning a rating on fanning nationalism, and a significant number of young people deceived and found the “meaning” of their existence in defending this ideology.

Method of application: young citizens entered into a frenzied state of consciousness are supposedly “young democrats”, “freely” expressing the “aspirations of the country”; allegedly those who “defend the truth and freedom with arms in their hands”; in reality, they are conducting terror against politically incorrect ones, and at the same time against those from whom it is possible to take something under some pretext.

Consequences of the application: law enforcement agencies and the armed forces do not control the situation in the country; civilians prefer not to mess with unhealthy thugs, but they are convinced that these thugs are criminals in need of treatment; Opponents of the authorities do not see the point in negotiating with politicians, because these armed formations of power do not obey; this makes the dialogue meaningless.

Method of withdrawal: termination of funding of these organizations; The last Chinese warning, followed by a mandatory detention (depending on the diagnosis - at the resort, in the SIZO or in the hospital).

5. Type of weapons: combat rakes. The direction in which the post-Maid government leads its country is clear to everyone without exception. In February last year, Ukraine stood on the edge of the abyss and has since made a big step forward.

The number of units in service: oligarchs with political power, Ukrainian and Western; ministers and deputies controlled by them.

Method of application: the shameless rape of their country with the goal of pumping out of it all that is valuable, which is accompanied by rhetoric about the salvation of the Fatherland. The reality of today is a depreciated currency, a rise in prices, a multiple rise in prices for housing and public utilities, a reduction in social programs. The reality of tomorrow is a giant debt pit, to exit from which you will need to sell all, without exception, the valuable things in Ukraine. The same, purely financial, reasons are one of the main reasons for waging war (mastering budget funds in the amount of several tens of millions of dollars a day, plus the struggle for Donbass fields).

Consequences of the application: the number of citizens who continue to believe that the cause of the impoverishment of Ukraine is “external aggression” is rapidly decreasing; the number of citizens stating that the cause of the impoverishment of Ukraine - the unprecedented greed and inconceivable level of theft, is growing rapidly. Citizens of the first category need more and more “information support” - talk about an external enemy; the effectiveness of this feed is rapidly reduced. Citizens of the second category have big doubts about whether they want to live in Ukraine, or at least in Ukraine with this authority.

Method of withdrawal: termination of voluntary fall in the debt trap; awareness of the real economic situation and its causes; cardinal change of economic policy (and, as a result, politics in general).

The main adversary that the Kiev authorities are fighting against is not the forces of the militia, but reality. The conflict was created artificially and created by Kiev, the reason for its creation is the desire to obtain and retain power, which gives access to the receipt and retention of financial resources. The current policy is leading the country into the abyss, citizens understand this, and the position of the militia (or at least the opposition) is shared by a huge part of the population.

The enemy called "reality" can not be defeated, he can only surrender. Surrender to common sense will return post-Maid authorities from lilac fog to solid ground. And then, too, and before the truce is at hand.