What to do with fascists in Latvia 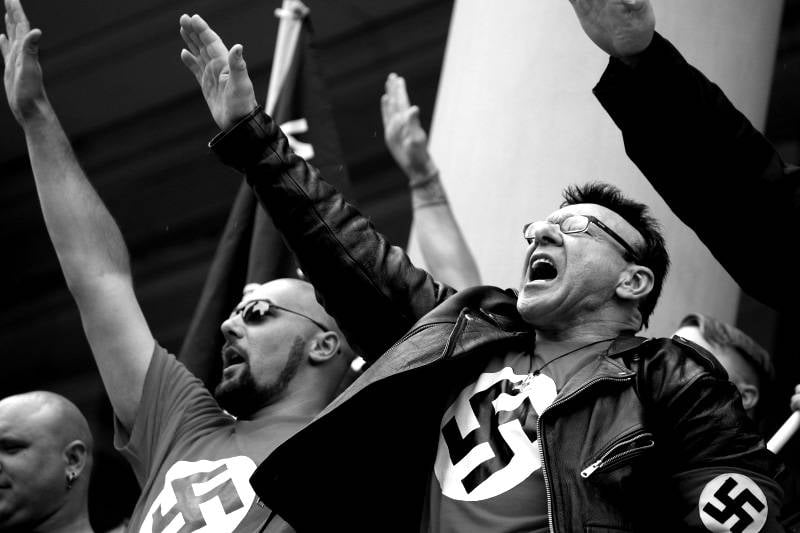 Immediately, several Russian human rights organizations called upon the “world community” to draw attention to the triumph of neo-Nazis in the elections to the Seimas of Latvia. Calls are long, interesting, so sit back. And below I will explain why it is useless and what to do instead.


On September 17, in Latvia, extraordinary parliamentary elections were held, as a result of which the radical party Visu Latvijai doubled its representation in the Latvian Seym (14 seats from 100) and formed the fourth largest faction. The slogans with which the VL won were completely neo-Nazi. This was the reason for the appeal of anti-fascist organizations to the international community in the person of the EU, PACE, OSCE, UN, etc.

Nazis can enter the government

“This party,” informs the International Human Rights Movement “A World without Nazism” (MTT), “aims to build a mono-ethnic Latvian state through the repression and forced assimilation of other peoples, whom they contemptuously call“ colonists ”and“ migrants. ”Thus, today the European community faces the real danger of the coming to power of neo-Nazis in a country that is a member of the EU and NATO. "

"The apparent success of Visu Latvijai,” the anti-fascists summarize, is due to the fact that there is no universal suffrage in Latvia and more than 16% of its inhabitants, 20 has been deprived of civil rights for years, only because their ancestors settled in this country composition of the Soviet Union. "

Further, the movement notes that "according to statistics from 100% of those who voted for the Latvian ultra-nationalists, 75-80% are young people between the ages of 18 and 30. The fact that the Latvian youth has voted for radicals is a direct result of the educational process in post-Soviet Latvia where nationalism is cultivated in schools is distorted история and the Nazi criminals, the soldiers of the Latvian legion of the Waffen SS, who fought on the side of Nazi Germany during the Second World War, are glorified.

"A world without Nazism" draws the attention of European institutions to "obvious violations of democracy in Latvia" and insists on its full implementation of the Council of Europe Framework Convention for the Protection of National Minorities, the elimination of the shameful institution of "non-citizens" and the provision of equal rights to all residents of the country ".

The situation in the Latvian Sejm is such that neo-Nazis will be forced to either enter the ruling coalition with moderate national liberals, or be blocked with someone in opposition. In this regard, the MPA "World without Nazism" calls on all political parties in Latvia "to refuse to cooperate with the nationalist association Visu Latvijai and to take all possible steps to prevent it from joining the ruling coalition."

The participants of the Regional Conference of Russian Compatriots of Latvia, Lithuania and Estonia list the facts testifying that "international norms that suppress the propaganda of neo-Nazism in the territory of the Baltic countries do not work in practice". The list is so eloquent that it makes sense to bring it almost without bills.

"In Latvia, this is expressed in the marches of fans and members of the SS Legion, which are held annually on March 12 in the center of Riga near the Freedom Monument. In Estonia, this is the annual July gathering of SS 16 veterans in Sinimiya. In Lithuania, they have been held for three years already on Independence Day Lithuania in the center of Vilnius marches under the slogan "Lithuania - for Lithuanians", - is featured in the Conference document.

"In the past two years, the connivance of the judiciary and the inconsistent position of the Riga City Council allowed neo-Nazis to openly mark the day when Wehrmacht troops entered Riga (1 July 1941) with authorized processions in the center of the capital of Latvia."

"On the contrary, all sorts of restrictions are applied to anti-fascist organizations. Their activities are unreasonably prohibited, and movement within the Schengen zone on the eve of the pro-Nazi events is limited, the special services of Latvia and Estonia exchange information on the participants of the anti-fascist events and consistently include them in the black lists of people whose entry to the territories of these countries are limited. "

"The Baltic governments actively promote the thesis of" equal criminality "of the communist and Nazi regimes inside and on the international arena, call the army that liberated the countries of Europe from Nazism, occupying. Thus, the sense of the great Victory over Nazism is devalued in the minds of young people, which is already manifested in the growth of popularity Nazi sentiment. "

"Over the 20 years of independence, not a single Nazi criminal was convicted in the Baltic countries, and there were plenty of anti-fascist trials, including heroes of the struggle against Nazism. Most of the former SS legionnaires in Latvia and Estonia enjoy various privileges, and their organizations - state support. Veterans of the anti-Hitler coalition do not receive state support. "

The participants of the conference "join the opinion of the UN General Assembly that such actions defile the memory of the countless victims of fascism, have a negative impact on the younger generation and are absolutely incompatible with the obligations of the UN member states."

The signatories are asking "special UN structures responsible for combating racism and xenophobia to pay close attention to the actions of the Baltic authorities in supporting the ideology of neo-Nazism and Nazi collaborationists."

Elections were not universal

The human rights group of the Council of Latvian Public Organizations declares that "the extraordinary parliamentary elections of Latvia’s 17 on September were again not universal, and therefore could not be recognized as democratic and legitimate. Elections and referendums in Latvia and Estonia due to the non-participation of hundreds of thousands of permanent residents - so-called non-citizens - they cannot be recognized as meeting the standards of democracy adopted in Europe ... "

"In the interests of the establishment of Latvia as a democratic state, it is necessary to immediately eliminate mass statelessness and to hold the first elections to all authorities after 1991 on the basis of universal suffrage."

The Civil Control Association, under the leadership of Alexander Brod, states that "the election campaign was significantly influenced by the Russophobia problem of some Latvian political figures. For example, on September 8, an American doctor of Latvian origin, a member of the neo-fascist bloc Slutsis, named the parties for which, in his opinion, he cannot be considered a “Consensus Center”, the main goal of which, according to Slucis, is “Russification of Latvia”, as well as the “Unity” party and the Reform Party Zatlers, due to which about his opinion, “Russians are becoming more and more aggressive, dishonest and chauvinistic with every year.” At the same time, the doctor called “honest Russians” those who “want to stay in Latvian Latvia.”

The main problem of the last elections to the Seimas of Latvia, as before, was the problem of failure to ensure the fundamental principle of universal suffrage. Thus, the total number of so-called "non-citizens" is about 345 thousand people, i.e. more than 15% of people in the country who have reached the age of acquisition of the right to vote These persons, according to the legislation of Latvia, do not have the right to elect and be elected, moreover, they are deprived of other political rights.

At the same time, the Association believes that "in general, the past elections corresponded to other international electoral standards."

Found someone to complain

On this occasion, I want to say this.

The first. All of the above organizations appeal exclusively to the EU and the US, which themselves encourage these Nazis. To verify the futility of these appeals, it is not necessary to list the attempts of respected and moderate Western leaders to equate the USSR with the Third Reich. It is enough to read the summary of the OSCE observers about all the same elections to the Seimas of Latvia. What does it say?

"The extraordinary elections to the Sejm held on Saturday in Latvia were held in a democratic and pluralistic atmosphere, they were characterized by respect for the law, respect for fundamental freedoms ...". And further: "The fact that non-citizens - approximately 16% of the population of the country who have reached the voting age - cannot participate in the voting process and have no representation, still remains a challenge for Latvia."

That is, not for the EU, of which Latvia is a member, but for Latvia. This means that in Brussels they are no longer inclined to consider discrimination against Russians in this country as a problem of the EU. And that means to bring it to a supranational level.

If you still do not believe that the US and the EU are carefully nurturing the Baltic fascists, then here is an excerpt from the same address of the Conference of Compatriots: "The monuments to the fighters of the anti-Hitler coalition are demolished, their burial places are exhumed. But the memory of not only local Nazi collaborators, but foreign ones are perpetuated founders of the Nazi ideology. For example, the name Benito Mussolini is carved in the Pantheon of heroes at the Bratsk cemetery in Riga, where the leaders of Latvia and foreign diplomatic missions lay flowers every year ".

The second. All anti-fascists appeal to Yalta-Potsdam international law, the 20 anniversary of whose death we vigorously celebrated this summer in Antalya. Although it has long been clear to everyone that since the last decade of the twentieth century - especially after Iraq and Yugoslavia - only force has ruled the world. Power is in the West, there is no one to balance it yet, and the West does not intend to fight neo-fascism, as we have seen above. On the contrary, as the signatories themselves note, the growth of neo-fascism in Europe is a common dangerous trend.

And the last. Since the era of coercion has come, it makes sense to turn to tools that, no matter how weak the raw material Russia, it has. And the epic with the Bronze Soldier showed that they work well.

Why, for example, no human rights activist mentions the possibility of imposing sanctions on Latvia by the Russian Federation?

Why don't the anti-fascists urge Russian transport and stevedoring companies, as in 2006 in Estonia, to refuse from the services of Latvian ports in favor of the ports of St. Petersburg and Ust-Luga? In vain did we build this Ust-Luga?

Why none of them propose to impose restrictions on the work of the Baltic semi-offshore banks in Russia? After all, ultimately, the local neo-fascists fatten beer faces due to the transshipment of Russian cargo and money - those who did not break off from this cake, had long sat on RyanAir and were tired to paint window sills in Dublin.

Why, finally, Russia does not prohibit its citizens under the threat of a fine to buy apartments in Latvia, which she lures money Schengen fans? After all, there is no need to even change the laws, all this can be done within the framework of the same sanctions.

So for the work, gentlemen!

We are in Yandex Zen
Strange monitoring and double standards
How Latvia pragmatically and constructively cooperates with Russia
67 comments
Information
Dear reader, to leave comments on the publication, you must to register.