THIS IS MY WAR: We will establish the Day of Remembrance for the Victims of Fascism and Collaboration! 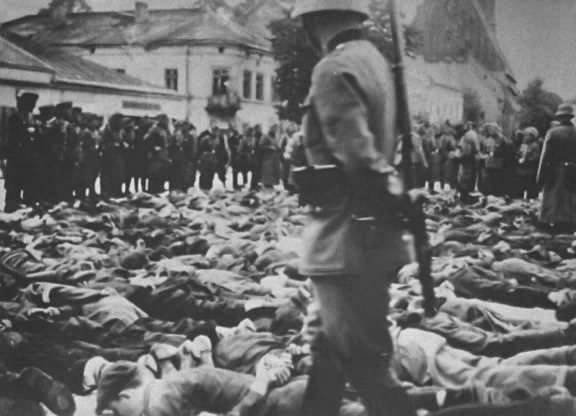 We, children, grandchildren and great-grandchildren of the Soviet people who sacrificed their lives for the victory in the Great Patriotic War against Hitler and his allies, the millions of people who fell victim to the genocide planned and realized by Hitler and his accomplices, the heroes who crushed the reptile of Nazism in its lair,

As a specific date for the Day of Remembrance for the Victims of Fascism and Collaboration, we suggest considering the following:

1. September 30 (1938 of the year) “The Munich Agreement” is an agreement between British Prime Minister Neville Chamberlain, French Prime Minister Edouard Daladier, German Reich Chancellor Adolf Hitler, and Italian Prime Minister Benito Mussolini about the dismemberment of Czechoslovakia.
2. October 30 (1940 of the year) - Appeal of the national hero of France Marshal Petain to the nation with a call for cooperation (collaboration) with the Nazi occupiers.
3. 2 July (1941 of the year) - Lviv pogrom - the mass extermination of the Jewish population and the Polish intelligentsia by the Nazis and their Western Ukrainian accomplices.

After collecting signatures, the Appeal will be submitted to the presidential administration of Russia and the apparatus of the Russian government, to the authorities of other states.

We are in Yandex Zen
Contrary to Nuremberg: new trends and forms of propaganda of fascism
Modest Kolerov: The heirs of Hitler's allies, the United States, nationalists and "de-Stalinizers" in the EU are preparing "Nuremberg" against Russia
11 comments
Information
Dear reader, to leave comments on the publication, you must to register.