"I can see everything from above ..."

July 18 2010
2
In September, a balloon designed by the Montgolfier brothers raised three passengers to the sky of Versailles: a sheep, a goose, and a rooster. Two months later, the first flight on a hot air balloon was made by people. And soon they began to use balloons for military purposes. 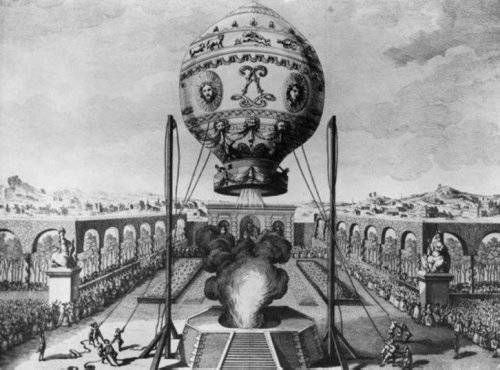 After the bourgeois revolution took place in France at the end of the 18th century, literally all Europe took up arms against it. Troops from Great Britain, Holland, Austria, Prussia, Spain and Portugal were involved in military operations against the country engulfed in revolutionary events. Collecting forces to fight them, the Jacobin Convention in 1793 year appealed for help to the French scientists. In response, the physicist Guiton de Morvo proposed the use of balloons for reconnaissance and observation. 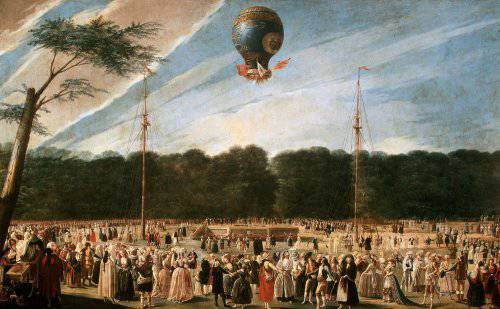 The offer was accepted. The aerostat built specially for use in the army was on trial rising to a height of 500 meters. From there it was possible to observe the movements of the enemy troops at a distance of 25 kilometers.

Half a century later, in 1848, the inhabitants of Venice rebelled against Austro-Hungarian rule — the war began. The Austrians besieged the city located on the islands in the lagoon. The artillery in those days was not yet distinguished by a long range of fire and could only fire its outskirts. For the most part, the shells and all, not reaching the goal, fell into the water. And then the Austrians remembered about the balloons. They decided to deliver incendiary and explosive bombs to Venice with a fair wind, hanging them from cylinders filled with hot air. 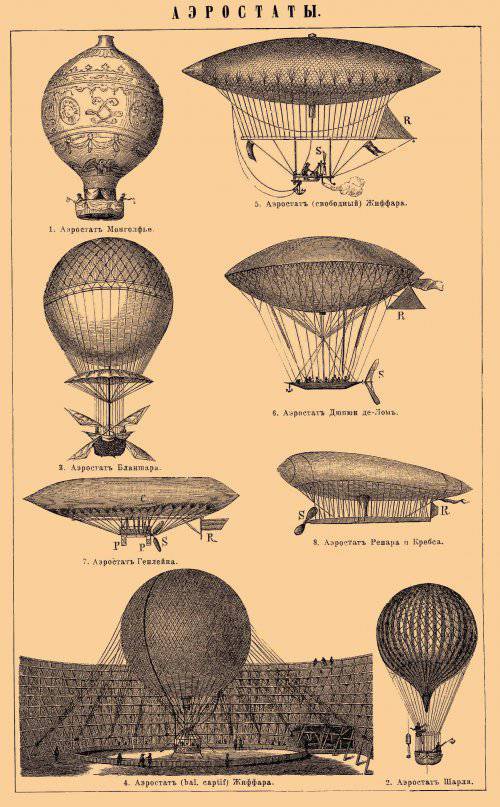 This is a miracleweapon the Austrians dubbed the aerobombs. The spherical shell of the balloon was made from thick writing paper. On the seams of the vertical stripes on the outside and inside were glued with ribbons of matter. A canvas circle with a loop for lifting the balloon was glued to the upper part of the ball, and a hoop attached to the bottom served as a support for a small hearth. The bomb was hung on a rope a little more than a meter long, and its detachment was provided by a special ignition cord, the burning time of which was carefully calculated. When the bomb began to fall, the balloon soared vertically upward with a candle, burst, and unburned coals with the hearth fell down, often causing fires.

Before the launch of balloons was carried out sighting. A trial balloon was launched from a suitable hill, and the Austrians, watching it, plotted its flight trajectory on the map. If the trajectory passed over the city, then from this elevation they were bombarded. If the balloon flew off to the side, then the starting position was changed accordingly. These “airstrikes” did not inflict much damage, but the nerves shook the residents of Venice thoroughly. When flocks of balloons appeared in the sky, panic began in the city, and every time the wooden Venetian fleet was in a hurry to move away from the coast. 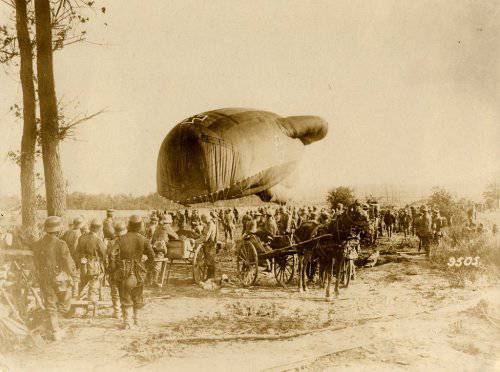 Of course, there was no great expectation from such a bombing, but some successful hits took place. So, one of the bombs exploded in the very center of the city, on St. Mark's Square, and alarmed the whole city.

Initially, balloons were filled with hydrogen directly from the barrel, where sulfuric acid reacted with iron shavings. This gas production system was served by dozens of workers, and the filling of the aerostat envelope lasted up to two days. The great Russian scientist Dmitry Ivanovich Mendeleev came to the conclusion that hydrogen can be stored in metal vessels under high pressure. While he was knocking the thresholds of the Russian military, in England, in England, Tors-ten Nordenfeld, an engineer, launched production of steel cylinders for the storage and transportation of hydrogen under pressure 1880 atmospheres in England in 120. 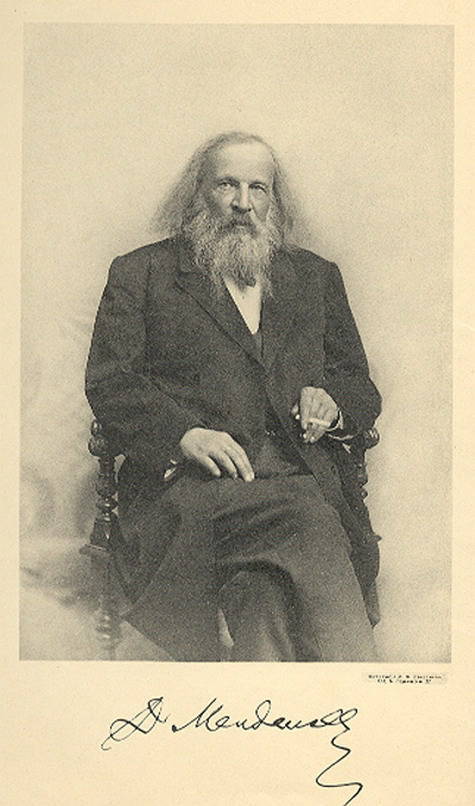 Alexander Matveyevich Kovanko (1856-1919 years) was a big enthusiast of aeronautics in Russia. In the second half of the eighties of the 19th century, he was the clerk of the commission for the use of aeronautics, pigeon mail, and watchtowers for military purposes, “commanded a detachment of military balloons and visited to exchange experience in France and Belgium. With the beginning of the Russian-Japanese war 1904-1905 under 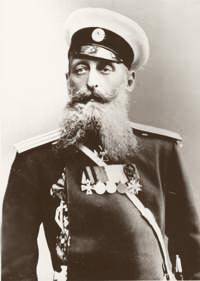 Kovanko’s leadership unfolded the development of new types of field aeronautic apparatus and the radical restructuring of the heavy and bulky materiel of serf balloons. Thanks to the conviction and energy of Alexander Matveyevich, the East-Siberian Field Aeronautical Battalion was formed, which the honored inventor headed. The Kovanko battalion was armed with four tethered balloons, horse-drawn winches and gas generators, which allowed the balloon to be filled with hydrogen in 20 minutes.

Already during the siege of Port Arthur, it became clear how invaluable benefit would have been for aerostats to besieged Russian troops. Especially after the enemy fortified camp, which was fired from battleships, was shot with 12-inch projectiles, was considered from a homemade tethered balloon. We also note that by the beginning of the war the Japanese were able to commission a reconnaissance ship on which there was a tethered balloon. It was from him that the squadron of Admiral Rozhdestvensky, which had been defeated in the Tsushima battle, was detected in advance.

In the 1913 year, after two representatives of the French army visited the St. Petersburg Aeronautical Park, Kovanko was awarded the Order of the Legion of Honor. By the beginning of World War I, the Russian aeronautic units were staffed with admirable thoroughness by the Allies and were armed with 46 balloons, which had good stability even with strong winds.

Such facts speak about their effectiveness. The 14-I aeronautic company was deployed under the Ivangorod fortress. In the period from 9 to 13 in October 1914, when the Austrian troops approached the fortress, the balloon was lifted to the height of 400 meters and the balloon continuously corrected the fighting. The positions of the enemy, the location of his trenches and wire obstacles, the movement on the roads were explored in detail. The shooting of our artillery, corrected by telephone from an aerostat, proved so effective that the enemy fled from the trenches without waiting for the attack of the Russian infantry. This decided the fate of the battle under the fortress. The balloons turned out to be such a serious problem that aircraft were used to fight them, which either shot them with machine guns or set fire to them with the aid of liquid phosphorus. 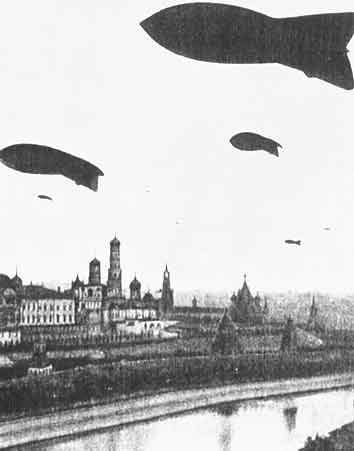 The balloon was not forgotten during the Second World War. The balloons were hoisted over the front line by artillery spotters or observers from headquarters. They were used to create barriers around big cities that impede the free passage of bombers. The forest of balloons over Moscow, Leningrad or London is one of the most characteristic features of that war. But this sphere of application of balloons is not limited.

Shaken by American bombing, Japan in October 1944 decided to strike back. For this purpose, a special aerostat regiment was created, at the disposal of which the Japanese General Staff planned to allocate 15 thousand balloons for five months, to which high-explosive fragmentation balloons were attached aviation the bombs. Preparations for retaliation were carried out in an atmosphere of strict secrecy. However, America turned out to be a very big goal. Balloons flew into the forests, then into the mountains, then on the prairie, leaving the cities somewhere on the sidelines. According to the reviews of the American press, this whole adventure had only a minor psychological effect.


It is curious that for reconnaissance purposes, balloons were used even in the times of the “cold war”. The Americans equipped them with photographic and other equipment and launched from the territory of their allies towards the USSR For ultra-modern fighter-interceptors, this goal was too slow, so to fight this miracle, our air defense systems armed themselves with hundreds more in the late seventies old fighter MiG-17.