March 11 2015
92
Large-caliber sniper rifles are a special type of sniper rifles of caliber from 9 mm to 20 mm inclusive. As a rule, such samples are significantly superior to ordinary sniper rifles in effective firing range, bullet energy, dimensions, mass and recoil, which affects the use of them. Currently, Russia has created a sufficient number of interesting solutions in this area, which are represented by both state and private producers of small weapons.


The main scope of large-caliber sniper rifles is disabling unarmored and lightly armored vehicles of the enemy, including low-flying or standing on the ground helicopters and airplanes; protected firing points (firing at embrasures and pillbox observation devices); controls, communications and intelligence (satellite communications antennas, radars, etc.); destruction of unexploded bombs and mines. Also, such rifles are quite effective means of conducting anti-sniper competition.

Modern история The development of large-caliber sniper rifles began with the advent of the M500 sniper rifle in the United States, which was created in 1981 by RAP. It was the M-500 rifle that was the first to be put into service by the American army and designed to solve the problems of fighting enemy lightly armored vehicles, fortifications, and other rather difficult tasks. At the same time, real success to the new weapon came after the appearance of the M82 rifle, developed by gun designer Ronnie Barrett. The rifle he created for the NATO cartridge 12,7x99 mm effectively solved all the sniper tasks at a firing range above 1500 meters. In the army, this rifle was nicknamed "Light Fifty" ("Light Fifty"). It was after the appearance of the M82 rifle in the United States that a real boom began on similar weapons. Nowadays, more than fifty companies have created overseas solutions for 12,7x99 mm cartridge, as well as special ammunition .308, .338 Lapua Magnum, and later the most interesting and promising ammunition 408 Cheyenne Tactical, or CheyTac. 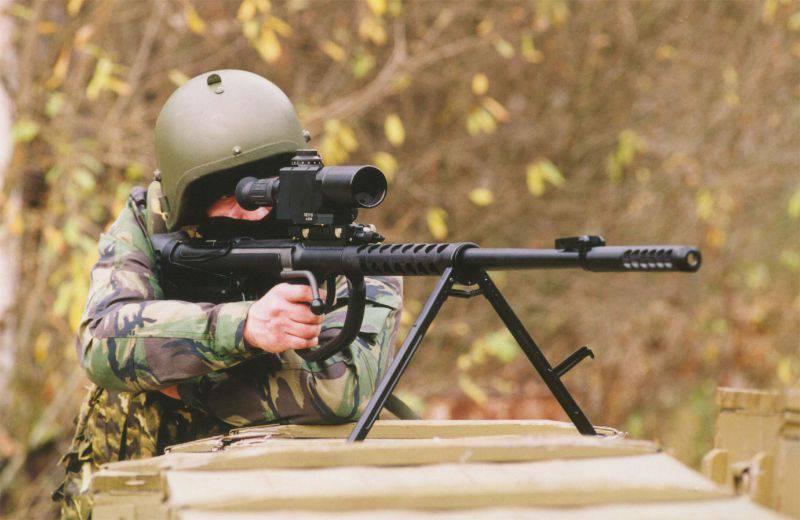 Russia has not stayed away from the development of systems of such weapons. At the same time, Russian large-caliber sniper rifles are quite competitive product. To create such rifles, both in our country and in the USA, cartridges were used that were borrowed from large-caliber machine guns: 12,7х99 mm (USA and NATO) and 12,7x108 mm (Russia). This solution is rational and has a rather impressive basis: the power of such a cartridge would be enough to penetrate any regular army means of protection and reservations throughout the entire flight section of the bullet. But such rifles and inherent flaws. Due to the high energy and large mass, the potential of large-caliber sniper rifles cannot be realized within the framework of conducting maneuver combat. They can be used from specially equipped sniper positions or for anti-sniper activities as part of special-purpose groups.

Large-caliber sniper rifles today are a special pride of Russian gunsmiths. One of the brightest representatives of weapons of this class is the OCB-96 rifle with the sonorous nickname "Burglar", which was nicknamed for its unique characteristics. It is considered the first Russian model of a large-caliber sniper rifle, which is able to hit not only manpower, but also various enemy equipment at great distances. The rifle was created in Tula at the Instrument Engineering Design Bureau (KBP) in the middle of the 1990-s (designer Arkady G. Shipunov). OSV-96 "The Burglar" was put into service in March 2000.

The OCB-96 rifle is designed to hit unarmored and lightly armored targets at distances up to 1800 meters, as well as enemy personnel behind cover and in personal protective equipment at a distance of up to 1000 meters. When firing sniper cartridges in 4-5 series of shots at a distance of 100 meters, the dispersion width does not exceed 50 mm. One of the main disadvantages of a rifle is a very loud sound when fired. Because of this, it is recommended to fire with OSB-96 large-caliber sniper rifle while in the headphones. 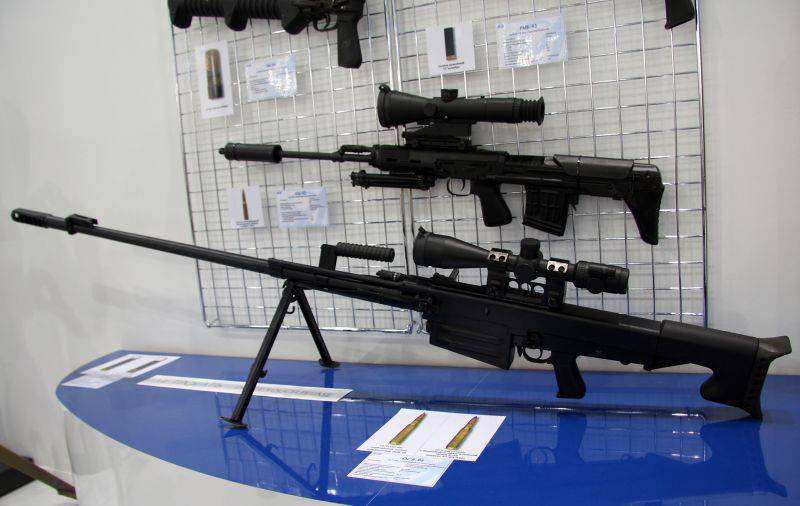 OSV-96 is a self-loading sniper large-caliber rifle, which works on the principle of using powder gases. The issue of large dimensions, which is typical for weapons of this class, was solved by the design features. In the stowed position, the rifle can be folded: the barrel, together with the vapor system, leans back and to the right and presses against the receiver, while the receiver and the breech section of the barrel are closed from possible clogging with a case. In the folded position, the "Burglar" does not go beyond the dimensions of a conventional SVD rifle, which allows the shooter to easily fit in vehicles and armored vehicles. The transfer of the rifle from the folded position to the combat position and back is carried out in a matter of seconds.

Of the features of the weapon, self-loading work and an effective choke are distinguished, which reduces the sniper's fatigue and allows him to fire with a high rate of fire. And bipods adjustable in height allow you to take the most convenient position for shooting. Also, the rifle has all-day use due to the use of different types of sights, including night vision. And a long range of effective firing, which allows the sniper to be out of range of accurate fire from small-caliber conventional weapons. At the same time 12,7-mm sniper bullet has three times less demolition than the bullet caliber 7,62 mm.

For cases that require a special approach from the shooters, a rather effective system was found in the arsenal of Russian gunsmiths - VKS / VSSK Vykhlop. Of course, the effective range of firing from such a rifle is lower than that of its fellows. Aim range - 600 meters. But the SC-130 ammunition of caliber 12,7х55 mm weighing 76 grams used in a rifle allows you to hit almost any target almost silently, as far as the caliber of this ammunition allows. At the same time, another mass advantage of the sniper rifle was its mass, which is almost 3 times smaller than the mass of its louder counterparts in caliber. 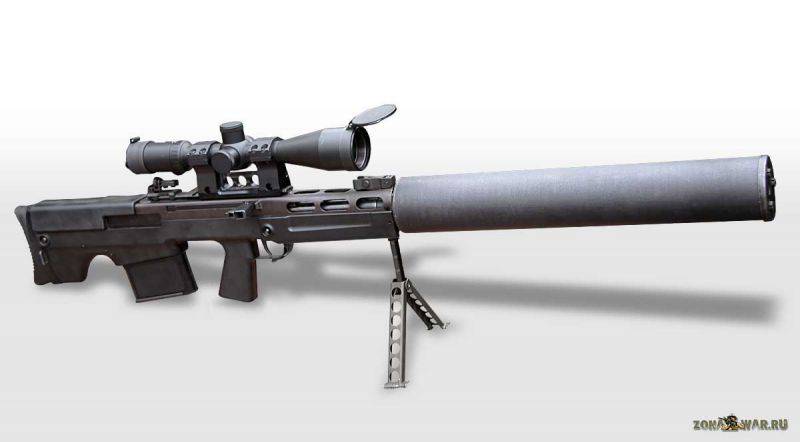 This sniper rifle was created by designer Vladimir Zlobin in the period from 1999 to 2004. The rifle was created under a special order, which came from the Center for Special Purpose FSB of Russia. This sniper rifle is being manufactured at the Central Design Bureau of Sports and Hunting Weapons (TsKIB SOO) in the city of Tula. The SC-130 cartridges used in this rifle allow you to break through the 15-mm steel plate at a distance of 200 meters or body armor 5 protection class at a distance of 100 meters.

The main task that the Exhaust sniper rifle must solve is the defeat of protected targets, including those using 4-6 class individual armor protection (SIB), targets that are behind shelters, obstacles, and enemy vehicles, unarmored and lightly armored. at a distance of up to 600 meters, a flameless and noiseless shot due to the use of a silencer of the original design and special powerful ammunition with subsonic bullet speed. Structurally, this rifle is a non-automatic weapon with manual reloading with the arrangement of its mechanisms and parts according to the bullpup scheme. The rifle is equipped with an integrated silencer, which can be removed for cleaning and transporting weapons.

Currently, the "Tsar's Crown" among all large-caliber Russian rifles belongs to the 6C8 sniper rifle, created at the plant to them. Degtyarev. This rifle was created already in the distant 1997 year, but for various reasons, for a long time it was not put into service and was not mass-produced. Having collected all the developments in 10 years and having worked on the bugs, the Degtyarevs managed to achieve the adoption of their weapons. It happened in June 2013 of the year. An ASVK rifle (a large-caliber army sniper rifle) was adopted by the Russian Armed Forces under the designation 12,7-mm sniper complex 6-XNNUMX. 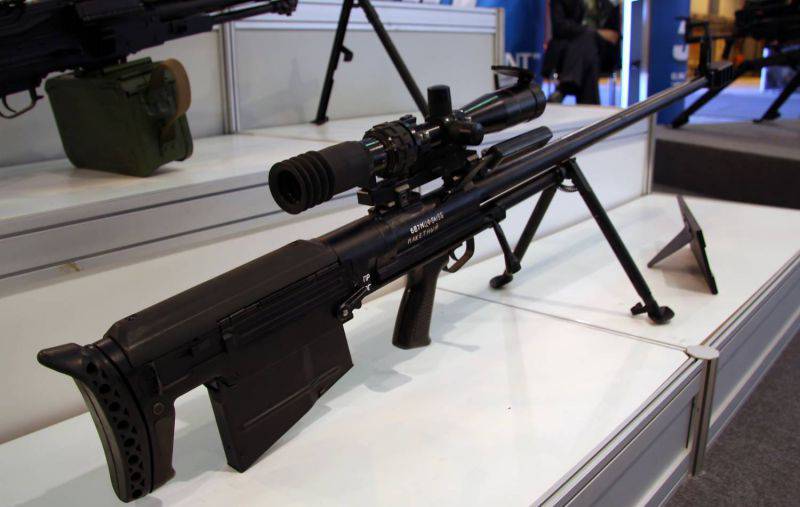 The 12,7-mm sniper rifle 6C8 is designed to solve special fire missions to defeat unarmored and lightly armored equipment of the enemy, as well as openly located manpower, including in individual armor, group targets and other technical means at a distance of 1500 meters. The rifle can be used specially designed sniper cartridge 7H34 and the entire range of conventional cartridges caliber 12,7x108 mm.

Structurally, this large-caliber sniper rifle was made according to the bullpup scheme. When using this scheme, as is known, the trigger is in front of the trigger mechanism (USM), which allows to reduce the size and weight of the weapon, resulting in increased maneuverability and compactness. In general, this sniper rifle turned out quite simple and reliable, which is very important for military weapons. And the reviews about its combat operation are mostly positive.

But what to do when it comes to hitting targets behind the 1500 mark, or even 2000 meters? In this regard, the Russian gunsmiths will also find the answer. We are talking about sniper rifles, which are created by Vladislav Lobayev. His company "Tsar-Cannon", KB integrated systems and its own brand "Lobaev Arms" - the first in our country who began the development and production of high-precision and long-range weapons, ranging from the barrel and ending with the butt. If earlier Lobayev’s sniper rifles were made for a single client (most Lobaev Arms rifles are commercial products intended for sale to individuals), now the company is presenting a whole series of sniper rifles brought to mind and monstrously powerful, designed for different calibers . The leader among them is one of today's best sniper ammunition - .408 CheyTac.

According to Lobayev, the main tasks of the production of Lobaev Arms are distributed almost equally - this is a commercial component and work with Russian security forces. If we talk about the second paragraph, then, for example, in the FSO are familiar with Lobaeva rifles. Federal Security Service officers repeatedly scored victories in various sniper shooting competitions with his rifles. Currently, the range (one of the most important indicators) rifles of the Russian company "Lobaev Arms" are among the first in the world.

One of the most powerful in terms of effective firing range solutions from Lobaev Arms is the SVLC-14C rifle. It is worth noting that further two kilometers - this is the ultimate distance for sniper fire. Cases where snipers hit real targets at such a range are known, but they had more luck than the real capabilities of modern weapons. At the same time, the SVL rifle was originally designed to break through this barrier, turning an accurate target hit at a distance of more than 2000 meters into a guaranteed result. The rifle fulfilled its task successfully, but the company “Lobaev Arms” decided not to stop there and presented an improved version of the rifle under the designation SVLC-14С.

The latest world record for the range of effective sniper shots is 2475 meters. But in reality, the overwhelming majority of snipers work at significantly smaller shots. It is worth noting that effective shooting at a distance of more than a mile requires not only high personal skill of the shooter, but also specialized rifle weapons systems of the highest level of accuracy, which are simply not available to the overwhelming number of shooters of special services or army units. At the same time, SVLC-14С is just such an ultra-precise sniper system. 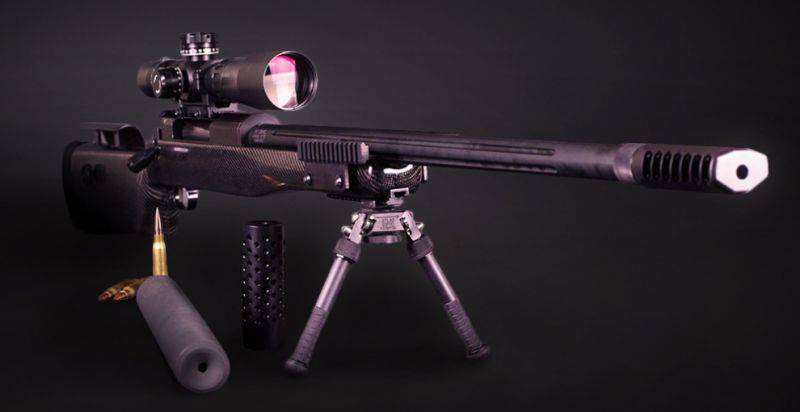 As you can easily guess the index "14" in the name of the super-long rifle says about the year of its development. SVL stands for “Lobaeva sniper rifle”, and the letter “K” in the index indicates the use of the gate group King v.3. This bolt group consists of a receiver in an aluminum casing, in which a hardened steel insert is fixed. Index "C" at the end of the rifle name is a reference to the English word Single. The basic model of a large-caliber sniper rifle SVLC-14С was and remains single-shot. This approach provides sufficient rigidity of the bolt box due to the presence in it of the minimum number of grooves and, consequently, a very high level of accuracy when shooting. The SVLC-14C rifle allows the shooter to confidently hit targets at a distance of up to 2300 meters.