Outfit soldiers of the future

23 September 2011
79
Large armies that fought on the battlefields in the 19th and 20th centuries are long gone, largely due to the modern development of technology, economic and demographic reasons. Today, NATO military forces (the USA and Europe) have launched joint programs aimed at reducing personnel, modernizing and restructuring operational capabilities. As part of these programs, a project called the “Soldier of the Future” appeared, which combines the achievements in increasing the productivity and effectiveness of an individual fighter based on the technological achievements of the 21st century. This concept implies the use by the fighter of night vision systems, positioning and navigation, improved targeting systems, systems for monitoring the psycho-physiological parameters of the fighter, and new dynamic defenses.

The IdZ-ES project, like most of its world counterparts, includes 3 core elements - protection, communication system and weaponssituational awareness. Modular communication equipment allows you to transfer video and voice data. The digital display, combined with the GPS system, allows real-time display of the ground situation with its transfer to command and control centers. In addition, the Rheinmetall IC4U computer is able to provide information exchange between fighters, combat vehicles and the corresponding networks. The German system is developed by the defense divisions of the Rheinmetall group of companies and the electronics division of the European Aerospace and Defense Concern EADS Defense Electronics.

Additionally, a wide range of sensors is being developed to detect mines and control artillery fire. It is planned to integrate the IdZ-ES system into armored vehicles, for example, the Boxer armored personnel carrier, the new Puma combat transport, and into light aircraft combat vehicles. 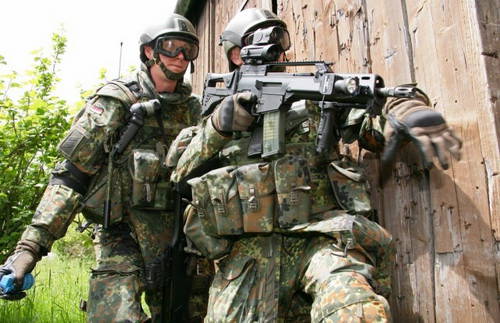 The complete German outfit of the soldier of the future will include the G36 assault rifle from Heckler and Koch; a laser system mounted on a weapon; a night vision system; computer-based command, control and communications information system (C41) embedded in the discharge vest; ear and eye protection subsystem; subsystem protection against weapons of mass destruction; the ballistic protection subsystem, as well as the shock protection subsystem.

The most important subsystem is the NavICom C41 navigation communication assistant, created by Thales, a European company. It determines the location of the soldier and his colleagues, the location of the minefields (which were determined in advance by other sensors), other danger zones, combat targets and their location, the presence of friendly, enemy or neutral military forces. This system provides secure communication and information exchange between the soldier and various levels of control online.

Additional components of the combat equipment of the IdZ kit, embedded in the main system, can be means for monitoring the condition of the fighter, determining the location of the snipers. The central element of control and interaction in the system is the PDA. With it, and the built-in maps and GPS receiver, the soldiers accurately determine their location and path to the destination. The PDA sends information about the location of the fighters, reports, photographic materials and even video clips to the command center.

The English project of a soldier of the future is by far the most expensive and long-lasting among all European projects. The initial design phase began in the 1994 year, and the deployment of this project is scheduled for 2010 and 2015 years, the full readiness of the complex of this equipment is planned for the 2020 year. At the same time, the cost of one set of FIST with all the additional options is about 84 thousand euro, which is about 3 times more expensive than other European analogues. The goal of the project is to equip 30-35 thousand British soldiers to 2015 / 2020 year. Thales UK and Qinetic are developing gear

The English project involves equipping the future soldier with special equipment that optimizes the effectiveness of combat, reduces the physical and psychological load of the soldier, minimizes the stress and risks of the human factor during the battle. 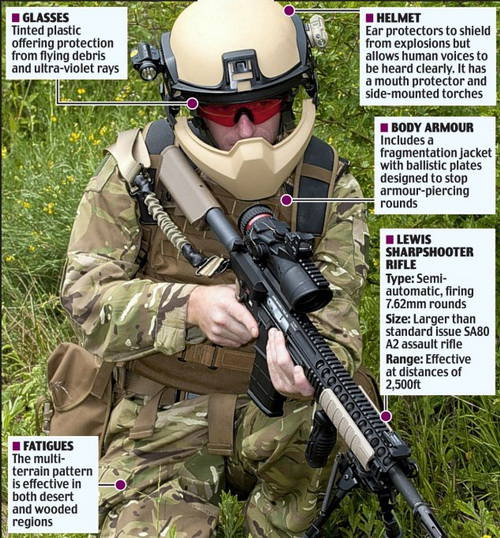 The FIST equipment kit includes various electronic systems (laser range finder, electronic-optical converters, map system, target locators), uniforms, a protective helmet equipped with integrated information systems, an advanced weapon system and personal armor. Due to the large number of electronic equipment included in the system, it was necessary to solve the problem of autonomous power supply of the kit. Power is planned to be carried out using promising batteries capable of holding a charge for a long time and having a low weight.

The key part of the kit is the communication subsystem. Communication between all unit fighters is provided by a small crypto radio. In case of loss of communication with the fighter, the network system connects backup communication channels. All data and voice commands are transmitted directly from the command center to the soldier. The fighter is equipped with a satellite navigation system, a device for calculating the path, a map of the terrain is displayed on the display of a protective helmet to increase situational awareness.

The weapon system includes the SA80 assault rifle and, depending on the need, the American M203 grenade launcher, as well as a number of other anti-tank weapons. All weapons are equipped with subsystems of observation, detection and target designation to increase the combat effectiveness of the soldier.

The American program of creating a soldier's outfit of the future is the most futuristic, using mostly technologies that have not yet been tested in practice. Among them: exoskeleton with artificial nutrition, nanotechnology, body armor using magnetic rheological fluids and others. In fact, it is planned to create a certain hybrid of man, uniforms and weapons systems, the elements of which will be interconnected as much as possible. The equipment is developed by a specially created Institute of Soldiers Nanotechnologies, which received a grant from the US Army for research in the amount of 50 million dollars.

One of the main elements of the future equipment should be a special "dynamic armor", having a thickness of only a few millimeters. This armor fits the soldier like a diving suit. Dynamic armor contains complex molecular components with which it can simultaneously act as an exoskeleton and body armor. To create armor, it is planned to use magnetic-rheological fluid (similar to oil), which can harden in less than 0,001 seconds using a magnetic field, in order to ensure protection of the fighter from enemy fire. 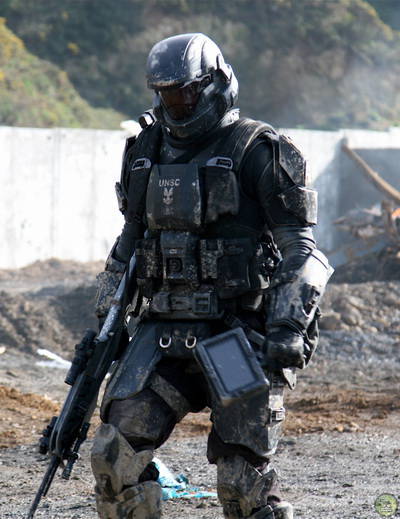 At the same time, American engineers are working out the possibility of using special liquids from silica nanobits (purified sand) and a mixture of polyethylene glycol. This mixture is able to instantly harden upon impact, and after damping the shock wave again to return to the liquid state.

It is assumed that the American soldiers receive for service reconnaissance unmanned system Skylark (Skylark), the main function of which will be optical observation. Not only the detachment commander, but also ordinary soldiers can control the drone using a small remote control mounted on their chest. This drone meets all modern requirements in terms of flight qualities, size, weight, and possibilities of interaction with the operator.

The drone control system includes 4 main components, which are mounted on the chest of the fighter for ease of use. This is a PDA, a tactical monitor, a control panel and an active Skylark Rambo sensor. The system developed by American engineers allows infantrymen to control the drone using a minimum of equipment. The device is launched into the air by the dispatcher, and it can be controlled by any soldier within his range.

A system has now been developed in the United States that is capable of tracking the physical condition of soldiers. It is called the WPSM (the warfighter physiological status monitor). The system combines a number of medical devices to determine the physical parameters of the fighters: heart rate, body temperature, pressure, stress level. The system is able to process incoming data and, if necessary, transfer them to the medical service for the necessary actions.

The sensors of the system will be embedded in a standard army t-shirt, which is part of the underwear. At the same time, the cost of manufacturing the system does not allow the United States to produce such uniforms in large quantities. The engineers were tasked with reducing the cost of its production, which would provide an opportunity for mass production.

Development of equipment for the future in Russia

In Russia, it is planned to complete work on creating a set of “soldier of the future” outfit to 2020. According to our high-ranking military, the Russian equipment in no way will be inferior to their foreign counterparts. At the end of 2010, Russia began negotiations with France to acquire a consignment of French equipment. Felin. Perhaps it is on its basis that the Russian version will be developed. The main advantage of the French kit is an order of magnitude lower cost compared to other analogues.

Currently, more than 20 enterprises are engaged in the development of a set of soldier equipment for the future in our country, including the Sozvezdie and Izhmash concerns, ZAO Breastplate, Cyclone OJSC, Center Arkomok OJSC. The set of equipment will include systems of destruction, protection, control, life-support and energy supply. 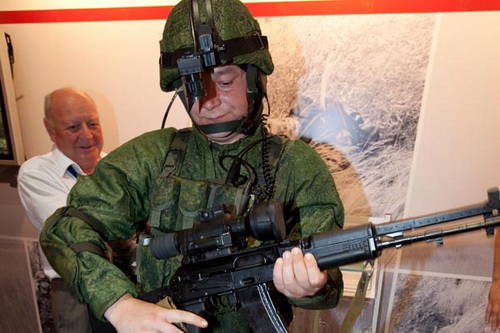 Special attention is paid to the development of the control system. The soldier will be connected to a network-centric system and will be able to manage from the highest echelons and timely transmit all the necessary information to the top. The fighter will be able to follow the battlefield, transfer target coordinates and video. A special communicator will allow you to determine the location of the fighter using satellite systems GLONASS and GPS, which will allow to carry out the tasks of target designation, orientation to the terrain and a number of other applied calculations.

The defeat system will include a modern-day modification of the Kalashnikov or a completely new sample of an assault rifle with a grenade launcher, day and night vision sights, as well as a separate video module allowing the soldier to fire from behind cover.

The protection of the fighters will provide a new protective suit Permyachka. This set of equipment is made from reinforced materials and provides circular ballistic protection of at least 80% of the body surface area against short-term exposure to open flame and low-velocity debris. In this case, the fighter's torso is more reliably protected by a light fragmentation vest. To protect vital organs from small arms, body armor is reinforced with special ceramic or steel plates. Also included in the protection kit is armor and a protective mask. In addition to armor, this kit includes elements of masking (winter / summer), a transport vest, a raid backpack, and some other 20 items of equipment.

We are in Yandex Zen
Soldiers night vision systems and night sights for small arms (1 part of 2)
Soldier systems under the blows of the winds of war (Part of 1)
79 comments
Information
Dear reader, to leave comments on the publication, you must to register.