March 10 2015
107
The power structures of various countries from time to time have to contend with riots. To prevent such phenomena, various special equipment and equipment are used. A vivid example of the latter is the so-called. police water cannons: water guns of sufficient power, mounted on a self-propelled chassis and connected to a large-capacity tank. However, in stories Special equipment there are other projects of machines of similar purpose, characterized by great originality and non-standard approach to solving the task. One of the most interesting types of special equipment for quelling riots was the Israeli Hazacit machine. 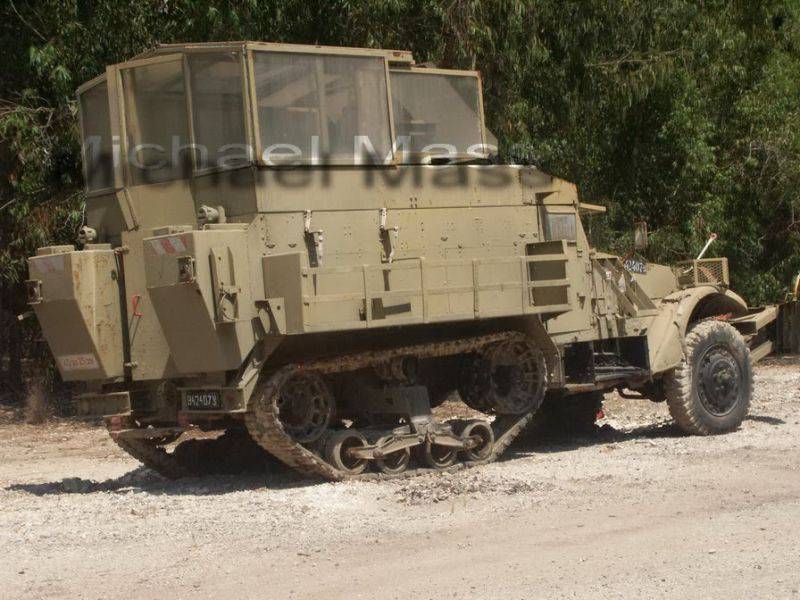 In December, the so-called 1987 began. The first Palestinian intifada, which lasted until the fall of the 93. This conflict is often called the War of the Stones, because in the first clashes in the direction of the Israelis the cobblestones often flew. The Israel Defense Forces, which had to take such attacks, needed funds to disperse the protesters. This required a system of non-lethal actions, which at that time Israel was absent. Shortly after the start of the clashes, the idea of ​​a new “police” vehicle of this class appeared, which could become a truly symmetrical response to the existing threats.

According to some reports, the project of a new means of quelling riots was created by Rafael, now known for its developments in the field of rocket weapons and unmanned vehicles. The new system for non-lethal impact on the enemy has received the name, fully revealing its essence, - “Hatsatsit”, which can be translated from Hebrew as “Crushed Stone” or “Shchebnemet”. The authors of the project decided that the best response to the stones and slingshots of the Palestinians would be a powerful throwing machine firing similar "ammunition."

It is known that the system "Hatsatsit" was made in the form of a set of units that could be installed on any suitable platform. There were kamnemety on the basis of light army vehicles, semi-tracked armored personnel carriers, etc. Even a modification of the system for installation on helicopters was being developed. The most widespread in recent years have received photographs of the system "Hatsatsit" on the basis of a modified American-made M3 armored personnel carrier. Consider exactly this version of the machine for quelling riots. 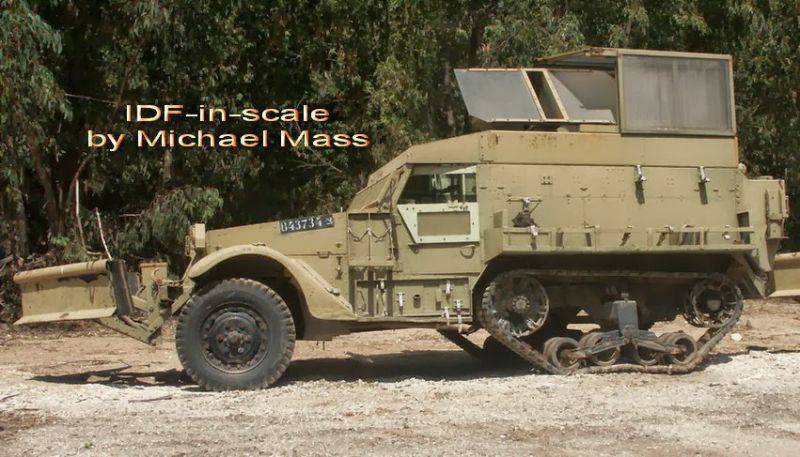 To install the units "Hatsatsit" did not need any major modifications to the design of the base machine. On the stern of the troop compartment placed a superstructure in the form of a frame with glazing. She had to protect the calculation from the stones flying behind, side and top. Naturally, the possibility of damage to the glass was not ruled out, but it was an acceptable price to pay for maintaining the health of people. In the center of the troop compartment, on its floor, installed a stone thrower, which was the main weapons cars. Along the sides there were racks for storing stone "ammunition".

In developing the stone-thrower, no unusual or non-standard solutions were used. The idea and general construction of this system was borrowed from conventional agricultural fertilizer spreaders. A casing of a semicircular shape was installed on a swivel base, inside which the impeller was placed. On one side of her was an electric motor. Next to the casing of the impeller there was a gravel supply hopper. In the existing photos, it is clear that, in order to avoid damage to the stone-thrower aggregates, protective rods were provided in the bunker to retain excessively large objects and ensure the safety of the calculation. In the upper part of the impeller casing, a rectangular nozzle was attached, designed to emit throwing stones. To protect the calculation on the “barrel” of a stone-thrower there was an additional glazing.

At the sides of the troop compartment of the base armored troop-carrier, racks were provided for storing the stock of gravel. The sample depicted in the existing photos could carry up to 36 containers with several kilograms of stones each. It should be noted, the size of the "ammunition" system "Hatsatsit" primarily depended on the type of the base chassis. Thus, the half-tracked armored personnel carrier could take on more containers than army passenger cars. 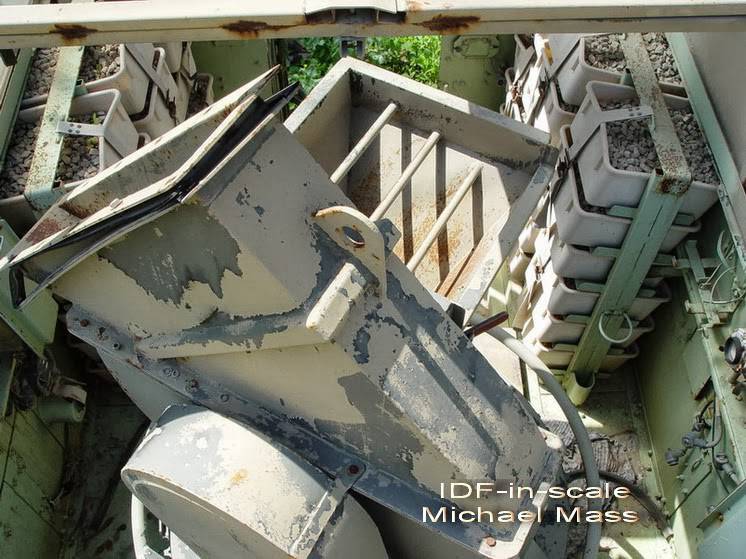 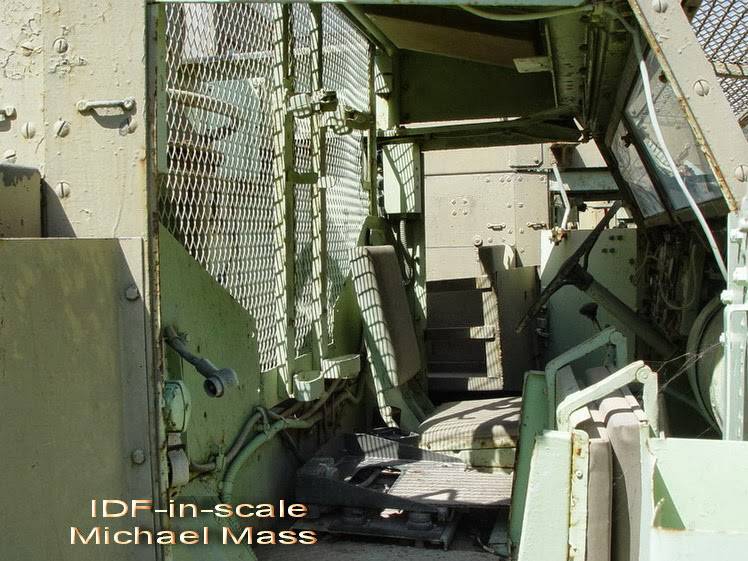 The principle of operation of the system "Hatsatsit" was extremely simple. The calculation, consisting of three people (the driver and two kamnemetchetchik), had to take the car to the position, start the stone thrower motor, turn it in the direction of the target and pour gravel into the receiving bin. Small stones through the receiving bunker fell on the impeller, accelerated and flew out of the socket at a fairly high speed. Such a weapon did not differ in high accuracy, however, it allowed to “sow” a sufficiently large area with stones, which was convenient for dispersing a raging crowd.

The need to create a non-lethal system affected the power of the engine used. The impeller rotational speeds were enough to “shoot” at a range of no more than 50-100 m. However, even at maximum ranges, small pebbles had the necessary effect on the rioters, causing them injuries of varying severity.

As already mentioned, several copies of the Hatsatsit system were built on the basis of various platforms. The exact amount of such a technique is unknown. There are references to at least three or four samples, which at approximately the same time were located at different bases of the Israeli army. More accurate information is missing.

Hazacite kamnemety has been used for some time to counteract riots, but by the mid-nineties they were decommissioned. One of the main reasons for this was the low efficiency of the system when “shooting” over long distances. At maximum distances, the speed of rubble was insufficient to have a tangible impact on humans. At the same time, however, at distances of no more than a few tens of meters, pebbles could inflict quite serious wounds. Thus, the Palestinians tried to stay away from self-propelled kamnemetov, and the Israeli military did not risk approaching the effective range of "shooting."

Later, another version of a kamnemete appeared to disperse the protesters, designed for installation on helicopters. On the sides or pylons of rotary-wing machines, it was proposed to mount tanks of the required capacity, inside of which it was necessary to fill up rubble. Ejection of stones was carried out using a remote-controlled device. This version of the stone-thrower did not need any impellers and motors, since the “ammunition” had to develop the necessary speed only by means of gravity.

According to some reports, the helicopter version of the stone-thrower was tested and even used several times in practice. However, this system was not widespread due to its low efficiency.

For several years, Israeli specialists have built a certain number of Hazatz self-propelled kamnemetov based on different chassis. Until a certain time, this technique was used for its intended purpose, but was later abandoned. The specific characteristics of the stone-thrower, as well as the change in the nature of the collisions, did not allow these machines to be operated even with the same low success. A certain number of Hatsatsit cars in various versions has been preserved to this day and is located at different bases of the Israel Defense Forces.