War has a feminine face

March 8 2015
54
In the last decade of February a feature film “Battalion” about the first in the Russian stories female military formation. The picture together with the film group was viewed by the president of the country, the criticism warmly responded. The film became a cultural event of the month. But not artistic merit attracted attention to him, but historical parallels.

From the St. George Knight to the Knights of the Order of Glory

The name of the full George Knight, shot by the Bolsheviks in the year 1920, the commander of the death battalion of Maria Bochkareva, was banned for a long time. Therefore, its history has been little studied. In it, and today a lot of obscure. One thing is obvious - at the very end of World War I, a woman stood up in the Russian army. Maria showed herself in the first battle. She not only withstood the onslaught of the enemy, but also endured more than seventy wounded soldiers after the battle. So M. Bochkareva received her first George.

Examples of participation in the hostilities of Russian women have met before. For the time being, the cavalry-maiden Nadezhda Durova was better known. She was remembered after the film “Hussar Ballad”, which passed on the screens of the country in the middle of the last century. No matter how the creators of the picture reproached that Shurochka Azarov has nothing to do with N. Durova, people simply did not have another type. 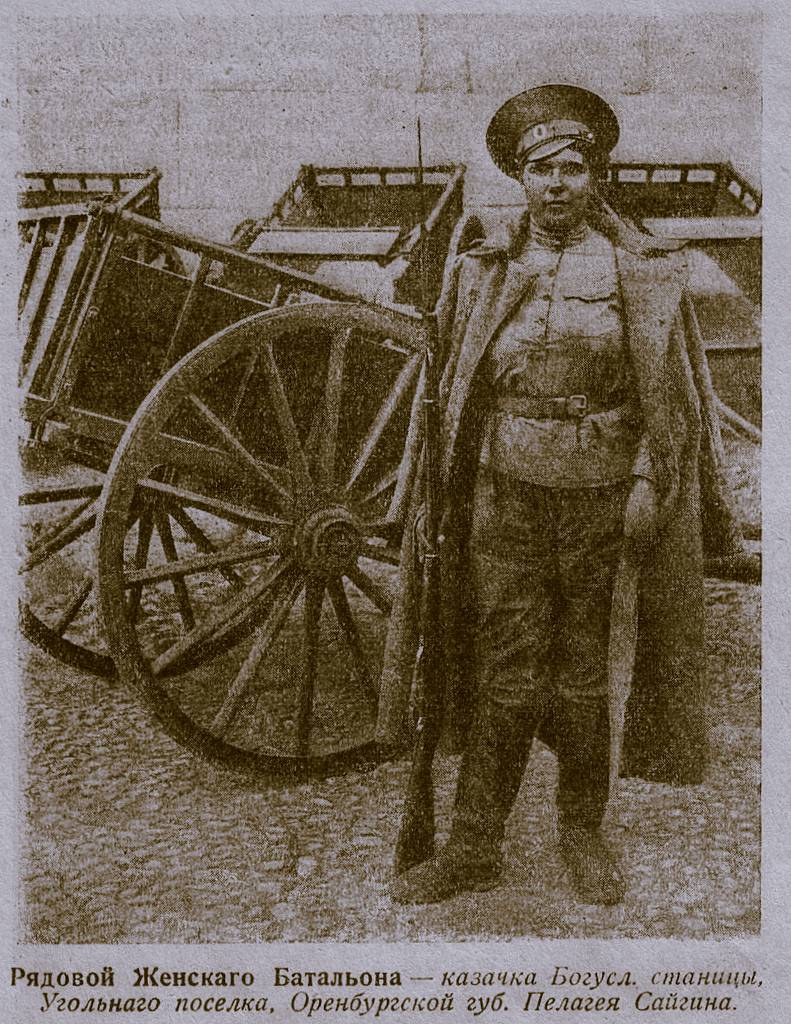 Maria Bochkareva is another matter. In the film she is under her own name and in real-life events. A rumor about the women's death battalion, which defended the Provisional Government in the Winter Palace to the last, lived among the people. This is after the rehabilitation of M. Bochkareva in 1992, we learn some other details. In fact, on the white banner of the new formation there was a slightly different inscription: "The first women's military team of the death of Maria Bochkareva." He was called the battalion simply because the number of people in 500 was more appropriate for just such a unit. Maria from 2000 volunteers challengers recruited them. However, the rest also did not dissolve into the world. Later, the Provisional Government will form three more female infantry battalions. It will happen closer to the fall of the 1917 year. Because they really didn’t have to do some fighting, and women soldiers will be remembered only by their steadfastness in defending the Winter Army.

The scale of the Great Patriotic War overshadowed the military affairs of the first female military battalions of Russia. During the war, more than 980 women were drafted into the ranks of the Red Army. Of these, three aviation regiment - 46th Guards Night Bomber, 125th Guards Bomber, 586th Air Defense Fighter Regiment. A separate female volunteer rifle brigade, a separate female reserve rifle regiment, and a separate female company of sailors also took part in the battles. There were also women sappers, nurses, signalmen, tankmen ... and, of course, we must not forget the military unit located deep in the rear - the Central Women's School of Snipers. There are many legends about her graduates. However, these are not legends at all, but real military deeds. Here is the Hero of the Soviet Union Lyudmila Pavlichenko (nee Belova). She owns the sniper record of the war - 309 killed enemy soldiers and officers, including 36 enemy snipers. By the end of the war, seventeen female snipers had had more than a hundred dead.

There were many such feats. For actions in the war 90 women awarded the title of Hero of the Soviet Union. I always believed that most of them were famous front-line pilots (31), then snipers. But no. In the second place in the series of Heroes - underground workers and partisans. Awarded 28 people. Almost everything is posthumous. Here is the highest percentage (exactly half - 14) awarded after the war, when it became known about the unprecedented feat of these wonderful women.

Well, there is also the main soldier's reward of war - the Order of Glory, which replaced the St. George Cross, but retained the black-orange ribbon under the inheritance of the brave warriors at the gymnasts. In the Great Patriotic War, four women became full holders of the Order of Glory. Let me remind them of their names: air gunner-radio operator Nadezhda Aleksandrovna Zhurkina, sanitary instructor Matryona Semenovna Necheporchukova, sniper Nina Pavlovna Petrova, machine gunner-gunner of the easel machine gun Danute Yurgio Stanilienee.

Life after the war taught us to appreciate the soldiers on the number of awards on their chest. Somehow you think a little that for women the very fact of being at the front in the harsh conditions of domestic and hygienic restrictions, in conditions of deprivation and mortal danger, is already a feat. Yes, and rewards began to encourage fighters at the turn of the war, after heavy defeats and countless losses.

In the rear, both at the front

The women of the rear with awards almost did not spoil. It is only later, after the war, in June 1945 will establish the medal "For Valiant Labor in the Great Patriotic War 1941-1945." For many years, it will be given to sixteen million people. How many of them are women? Nobody led the gender statistics. But there is other data. By the end of World War II, women made up three-quarters of the workers on collective and state farms, more than half in industry. They went to coal mines and to mines, to forges and foundries, to lay railways and metallurgical enterprises. I found from that time ... In March, 1942 41 women worked in the country's coal mines in March, and by the beginning of 010, their number had already increased to 1943 66 people.

Never been to Georgia. I could not even imagine that there are coal mines under the gardens and vineyards. But I met a note as the housewife Zinaida Muzhitskaya became the first woman in Georgia, who mastered the profession of a coal mining. On the holiday of 8 March, 1942, she completed a shift task with 1336 percent. Several standards were given by her colleagues Pama Abesadze and Euphrosyne Green.

Stories about the heroic work of Russian women during the war years will surprise us little. Hooked on the mention of an old publication Georgian name. Hence, the Georgians did not lag behind. How surprised the women of the East! In the 1944 year, for example, in Azerbaijan they accounted for 61,7% of tractor drivers, 52,2% of assistants to combiners, 35,1% of repair workers and 25,4% of chauffeurs. These figures do not differ much from those in our Siberian villages, except that the percentage of tractor drivers here reached 81.

Or here's an example from little Kyrgyzstan. At the end of 1943, 1222 women worked on the republic’s railway transport. Two of them - Alisa Omurova and Dzhamira Dzhusupova - became train drivers of locomotives.

Another fact finally touched me: during the war years, Uzbek women surrendered for the front 38 725 liters of blood. Later, driving through the city, I met a gaggle of visiting migrant workers and thought: didn’t their loved ones helped my relatives to get out of the heavy front-line wounds? ...

… Victory has many faces. Made up of different puzzles of the war. And this picture became a reference point for many years. We are lucky, our generation has grown up with the winners. In ordinary life, their influence did not seem to be felt. But when the hour of battle came, the grandchildren were not inferior to their grandfathers. So it was when my fellow countryman - a simple rural guy Nikolai Anfinogenov, covering the retreat of fellow soldiers in Afghanistan, blew himself up with a grenade along with the dushmans. For which he was awarded the high title of Hero of the Soviet Union. So it was on the Chechen borders, where in an unequal battle the sixth company of the Pskov paratroopers fell, but did not retreat. The memory of her is revived every March. So it was at an unnamed skyscraper near Debaltsevo, where they burned down in tanks Donetsk guys, taking back their land from the nationals. We have yet to evaluate their high deeds. One thing is obvious - we equate every feat of new heroes according to the highest bar set by the front-line soldiers of the Great Patriotic War. Here the most striking example for us is women who, in a difficult time for the Fatherland, took in their hands weapon or downhole mines ...