Alexander Moroz, 1-I tank brigade: “Three of my Bulat burned three T-72 in Logvinovo in one battle” (Censor, Ukraine)

March 6 2015
224
The fact of the fierce tank battles between Ukrainian tankers and the battalion-tactical group of the 5th separate tank brigade of the Russian Federation from Ulan-Ude in the Logvinovo area was recognized as the enemy.


About this in his article writes Glavred Tsenzor. NO Yuri Butusov.

Here's how the battle was described by the wounded Russian tankist- "contractor" of the 5-nd Russian tank brigade Dorzhi Batomunkayev:

"The commander of my battalion ... He is now in Rostov, just as he was burned in a tank, like me ... my battalion commander, colonel. Somewhere in 12-14, in those days. Because I had to release one village. I do not remember what is called ... The village was repulsed ... well, everything ...

We played the carousel. This is such a tactical method of combat shooting from a tank. Three or four tanks leave for the line of discovery of fire, shoot, and as they run out of ammunition, they are also sent to replace three or four tanks, and they are loaded. So they changed.

But the battalion commander was not lucky. When performing the carousel, when you shoot from a tank ... A tank is a very capricious machine, it happens that the shot is protracted. You kind of bummed, but he didn't bum a damn thing. Just does not shoot a tank, stupidly does not shoot and that's all. The first tank shot - bang, the second, the third tank - delay. And they are hammering dill. And that's all. The battalion commander jumped into his tank, drove - he destroyed one tank, the second one destroyed it. "

In the photographs of broken military equipment in the area of ​​Logvinovo, Tsenzor.Net on the Internet found at least 8 broken tanks, mostly T-72, which most likely belong to Russian tank units. And most likely, this is not their final list of losses. It became interesting to me to establish - and who burned the Russian tanks under Logvinovo?

I wrote the status:

I first recorded an interview with the commander of a tank company of the 1 tank command brigade. This is Captain Alexander Moroz. His company as part of 3 tanks T-64BM "Bulat" 12 February attacked Logvinovo. 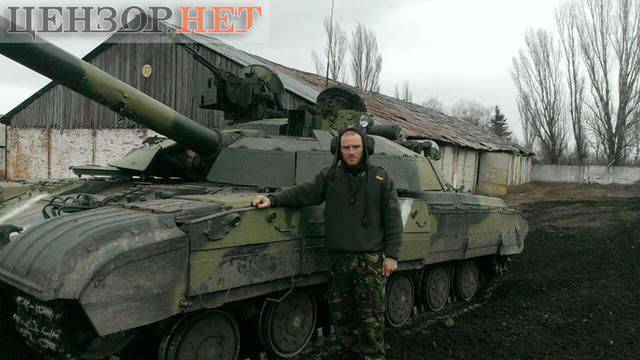 Captain Alexander Moroz at his "Bulat"

Moroz continues to perform tasks in the ATO, so the interview was done short, specifically one by one. Here is his story:

"We received an order to attack Logvinovo on February 12. Unfortunately, our brigade and my tank battalion are scattered in two sectors, and only one of my companies was allocated for the attack. I have five tanks, but for various reasons only three vehicles could go on the attack. It was my crew - gunner Fedor Matyusha, mechanic-driver Boguslavsky Artem. Also involved in the attack were the crew consisting of tank commander, senior sergeant Vladimir Kostenko, gunner soldier Mikhail Kryshchenko, mechanic lead soldier Dmitry Dmitrenko and crew sergeant Gennady Koval Skoda, gunner Alexei Ponamarchuk and driver Vasily Pustovoit. All three of our crews already have extensive combat experience - they took part in battles with Russian tanks even under Lugansk, all crews are made up of "contract soldiers", have a good level of combat training. Kostenko’s crew burned in the tank near Lugansk, but he escaped and did not leave the front, continues to fight. We went from Lugansk and got the task of covering the attack of the 30 unit of the mechanized brigade on Logvinovo. Our task is not to enter Logvinovo itself, but to cover the left flank of the attack, in an open area. 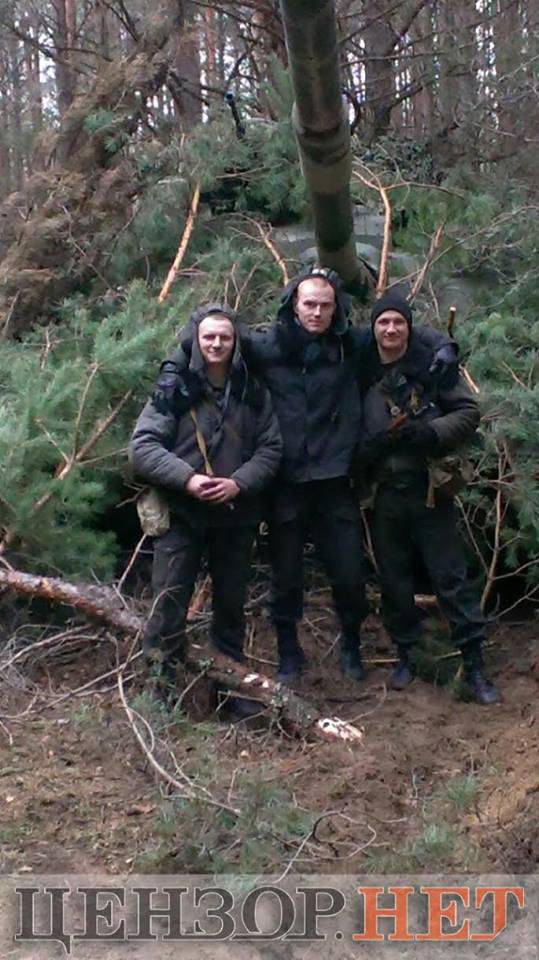 We attacked 12 February in the morning in 8. There was a beautiful visibility. We turned the front of the system, my "Bulat" was in the middle. The 30 Brigade went straight to Logvinovo, and my tanks covered the attack to the left of the village. Preliminary data on the positions of the enemy was not. Everyone controlled their sector. I was looking for targets from the hatch, we were afraid of an ambush. Near Logvinovo, to the left of the village, I noticed how the enemy T-72 suddenly opened fire on our infantry. That was our goal. I gave the command, and from the distance in 900 meters my gunner Matyusha destroyed it with a single shot. The fire, the crew jumps out, the tank exploded.

And then immediately my right-flank car was covered. At first, I saw an undershoot of our tank on the right. And then a direct hit into the tower of the tank Kostenko! Thank God, on the "Bulat" worked reliable dynamic protection "Knife". The tank not only survived, but it retained its combat capability and immediately continued the battle. Shoot and my car. One shell flew very close to me - I felt a wave of air. Then I saw a tank that shot at us. He was not far from the first. Together with Kostenko's tank, we opened fire on this tank - it began to crawl away, fire appeared, the tower was probably pierced, and Kryshchenko finished it off with high-explosive fragmentation. It did not explode, but began to burn. The distance between the enemy's wrecked tanks was small. At the same turn, the third tank soon discovered itself - it also came at us. We stopped and waited for the enemy counterattack. Therefore, the third car was quickly destroyed by the crew of Kowalsky. The battle for Logvinovo took no more than 20 minutes. 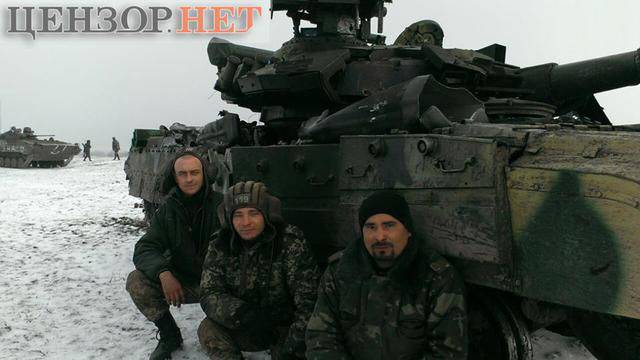 The crew of senior sergeant Vladimir Kostenko was photographed immediately after the battle under Logvinovo 12 February 2015. Our tanks under Logvinovo. Half an hour ago, an armor-piercing shell struck the tower of Bulat - a tank was saved by the Ukrainian complex of dynamic defense "The Knife". Despite a direct hit, the crew of Kostenko destroyed the Russian tank T-72B, which was the first to hit our car.

We took a profitable line to reflect possible enemy counterattacks, but no one else came at us. The 30 Brigade entered Logvinovo - but the attack was also carried out by very small forces.

We stood at Logvinovo all day. In addition to the disturbing fire, the enemy did not take more frontal attacks. Maneuvered around us. However, during this time the reserves did not come to us to gain a foothold in the position. We saw and heard the presence of enemy tanks, which acted cautiously and no longer came at us. Undoubtedly, the enemy had a numerical superiority. In the evening, the 30 Brigade began to withdraw. We returned back to the starting point to Lugansk. I think if at least a battalion entered 12 February after us in Logvinovo, we would be able to unblock the road. But alas.

In total, in the battles in the area of ​​Debaltseve in January-February, my tank company destroyed 6 tanks and 1 enemy BMPs. We recorded it in a combat log. No one has applied for any awards for the destroyed equipment. None of the crews in my company has yet received the status of a combatant. " 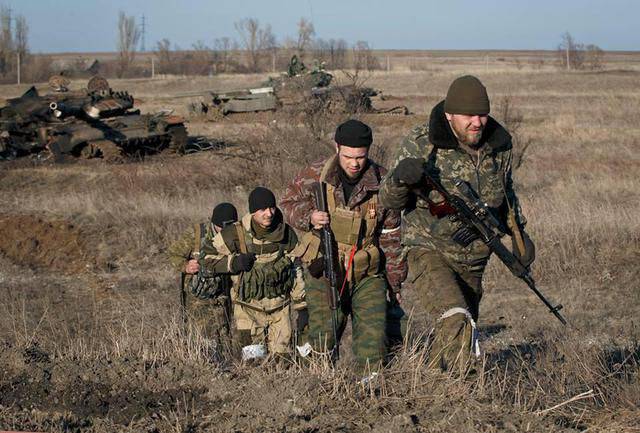 A group of Russian mercenaries inspect two T-72B tanks destroyed by Ukrainian troops at Logvinovo. It is quite possible that these tanks of the 5 th tank brigade of the Russian Federation were destroyed by Bulat of Captain Frost.

As a result, I want to add - we need to upgrade armored vehicles. Modification of T-64 "Bulat" - this is the right decision. The effectiveness of combat use compared to the T-64BV increases by an order of magnitude. In tank battles, technical superiority and the level of combat training are of paramount importance. For experienced and well-coordinated units, the latest military equipment is needed - tankers get tremendous quality superiority. If we had a modification of the T-84 "Stronghold" with a thermal sight for night combat, we would not leave Logvinovo, and be able to carry out a night hunt. I also believe that tank units should be replenished with equipment, and applied with concentration.

I think it is necessary to increase funding for the tank forces, to create material conditions for attracting experienced professionals to the troops, motivated, who can be trusted with sophisticated equipment. We need to create conditions for the work of professionals. We must fight not by number, but by quality. "

As for Dorji’s information about the destroyed Ukrainian tanks in this battle - there was clearly little time to consider the nature of the damage at Dorjee. Applications for the loss of the enemy must always be viewed critically, and rely primarily on objective fixation. In the stories of the Russian occupier and the Ukrainian hero, the date of the battle coincides, a number of details - the number of tanks that took part in the battle from the Russians, detail on the triggering of the dynamic defense of the Ukrainian tank, the information of the Ukrainian that the two destroyed Russian tanks were a short distance from each other.

"Censor. Net" will do an interview with other tank crews from the 14 and 30 teams, we hope we can restore the circumstances of the tank battles near Debaltseve. These are the first battles in the Russian-Ukrainian war, when tanks engage each other not only one by one, but in small units. And it is invaluable for the analysis of experience.

I think that for the heroism and high military skills shown, Captain Moroz and his fighters deserve high state awards. Frost - a hereditary tank officer.

Ctrl Enter
Noticed a mistake Highlight text and press. Ctrl + Enter
We are
Commentary on A. Petrov's interview “Fire and Tactics in the Russian Army: Another Look”About Stalin and Khrushchev
224 comments
Information
Dear reader, to leave comments on the publication, you must to register.