Sergey Mikheev: "Do not confuse geopolitics with the price of oil" 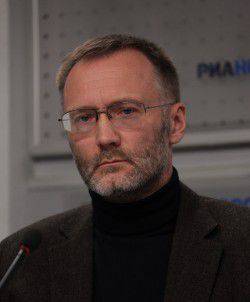 - Sergey Alexandrovich, 5 March, Baku will host a meeting at the level of deputy foreign ministers. Speech - on the development of a draft agreement on economic cooperation between the Caspian states, will also consider the initiative of Ashgabat to establish a permanent Caspian economic forum. There will be other topics for discussion, but the question is simple: how important is all this? And, if it really matters, why does everything happen in a kind of sluggish mode?

- The meeting to be held tomorrow is one of the stages of preparing documents for the next summit of the Caspian Five, which will be held in Astana in 2016 year. It will be separated from the previous summit in Astrakhan for two years, a short time to prepare the decisions of the heads of five states. In Astrakhan, it was a question of a possible final settlement of the legal status of the Caspian Sea, today economic cooperation between coastal countries is being discussed. All this requires the most serious study.

I was most interested in the information on the possible expansion of the economic partnership and the preparation of the cooperation agreement of the Five. In particular, news from Turkmenistan concerning the initiative of President Gurbanguly Berdimuhamedov on the possible creation of the Caspian Economic Forum. At one time, Dmitry Medvedev, who was then president, put forward the idea of ​​economic cooperation, which would unite the "five" in the format of some kind of cooperation - I will not use the term "integration". Caspian Sea is extremely necessary: ​​in terms of the rational use of marine natural resources in terms of their extraction and transportation. And only by joint efforts can this task be accomplished - taking into account all five states. The Caspian is considered, first of all, as a source of hydrocarbons, but for the countries of the region it is clear that it is pointless to rely on this factor as the only branch of development. Any person looking into the future will say: the real prospect should be the investment of revenues from the sale of oil and gas in other sectors of the economy, primarily in the development of innovation. Some oil-producing countries are doing just that and have achieved very serious successes.

But the states of the Caspian "five" in this direction have nothing to boast about. Yes, we pump oil, we pump gas, we drive them through pipes, but to say that we are developing the region, preparing prospects for future generations, seriously think that the Caspian must be not only a gas station, but also a source of innovation tomorrow, it is too early.

These are the problems that could become not only the subject of discussion of the Five, but also specific areas of cooperation within the framework of the association.

- That is, today, as a matter of fact, the proposal of Moscow will be discussed, but it came from Ashgabat, right?

- When the initiative was put forward by Russia, no one supported it. Let us understand: when Moscow comes forward with such proposals, reproaches and accusations of expansionism, imperial ambitions and attempts to impose its own model of integration on everyone are heard. Given that such cooperation is a demand of life, we need to create a positive picture of the future, and, of course, the details of the association can and should be discussed. So it’s good that common sense makes other states think about the future.

And it doesn’t matter who makes such a proposal, who gets the glory of the author. The main thing is that the idea be implemented and start working. If tomorrow the proposal of the President of Turkmenistan is supported by all other states - Kazakhstan, Azerbaijan, Iran and Russia - is fine. I hope this idea will be implemented, and at the upcoming summit of the Five will not only discuss the settlement of the legal status of the Caspian Sea, but also the problems of economic cooperation.

In addition, the solution of problems that are amenable to solution, will give, as is customary to say today, a synergistic effect and will allow to move in other directions. Economic cooperation will provide an opportunity to settle political issues, find compromises in areas that do not have a direct and quick solution. This is the path of searching for agreements, and not clarifying the differences.

- It is clear that in our official documents we are talking mainly about what unites us. Controversial problems remain, most often, "in the shadows." Soon, in the framework of the "Caspian Five", they will not remain at all?

- Of course, each of the Caspian states has its own economic interests, for example, in the sale of oil and gas. But to talk about the various geopolitical interests can not. What are the differences? In the one to whom to sell gas and oil, and at what price? Yes, of course, “trade” has nothing to do with geopolitics. Geopolitical issues are our presence in the Caspian region and the existence of common borders of the five countries. Share markets in America or Western Europe, as well as discussions about the price of hydrocarbons are not included. This is a conjuncture, a turnover, but our geographical position and security, good neighborly relations are the foundation of real geopolitical interests.

It is important to understand: the five’s geopolitical interests are not identical, but very close. Iran would also be happy to freely sell oil and gas to Europe if it were not under sanctions from the international community. And I would, I note, a powerful competitor of all the former Soviet republics. Tehran is simply not allowed to do this, and Iran’s opportunistic interests fully coincide with the similar interests of Kazakhstan, Azerbaijan and Russia. The West wants to buy hydrocarbons from us as cheaply as possible, but this already relates to its geopolitical interests. And nothing good attempts to put an equal sign between economic interests and geopolitics will not bring.

- The agreement on the legal status of the Caspian Sea and the "clean economy" can hardly exist separately from the security problems of the region ...

- Let's say Kazakhstan is part of the CSTO, it has a fairly strong mechanism for ensuring its sovereignty. As for Turkmenistan, I believe that if the militants of the Islamic State reach its borders, then the neutral status of this state will not stop them. All the traditional institutions of international law for this organization are simply fiction. The “IG” has nothing to do with agreements and treaties; if the militants have the power to threaten the post-Soviet state, they will do the same.

I don’t think that such a threat should be dismissed, sometimes it seems to us that the main thing for us today is to fill the sovereign’s treasury by selling oil and gas, and all sorts of “Islamic states” are nonsense. It seemed to many people in the Middle East, too, later it turned out that they were very mistaken.

I cannot fail to recall our western “friends-partners”: their geopolitical creativity was directly related to the emergence of the “IG”, to the fact that today the situation in the Middle East directly threatens the Caspian states. There, in the West, people work very creative, they love “creative”. Now we see their remarkable abilities. With the same success, they can engage in "creativity" in any other region of the world, they will not stop talking about the fact that someone is buying oil or gas from someone. Iraq also traded its hydrocarbons with the West. Did it become an obstacle to turning it into ruins?

On the one hand, we should not scare each other with “horror films”, on the other hand, we should not live in a world of illusions. Unfortunately, the world is not at all what we would like it to be, it is much less stable and much more unpredictable than some people think. I do not exclude that in a few years we will have to discuss not pipeline deliveries of gas and oil in one direction or another, but decide who will come from the flank, who will hit from the rear, and who will strike with an air strike ...

As for the military threat of the West to the Caspian Sea, then, of course, it is difficult to imagine how NATO and US naval ships could penetrate there. At the March meeting, these problems will not be considered, but it should be remembered: the situation around IG remains one of the main challenges to regional security, the militants get drunk with their own successes, this organization is developing very actively. If Transcaucasia is separated from Islamic State by relatively stable Iran and Turkey, then the proximity of Afghanistan to Central Asia is a serious threat.

I do not believe that the bombing of militant positions by the US Air Force, despite the bravura reports of the American generals, caused the IG great and irreversible damage.