In 1936, the head of the department of aircraft in the Air Force Academy. N. Ye. Zhukovsky Viktor Bolkhovitinov, satisfied with the success achieved in creating a four-engine DB-A heavy bomber, addresses the problem of creating a high-speed combat aircraft. Of the many layouts he chooses a scheme with two M-103 engines installed one after the other (in tandem) with transmission to coaxial propellers. 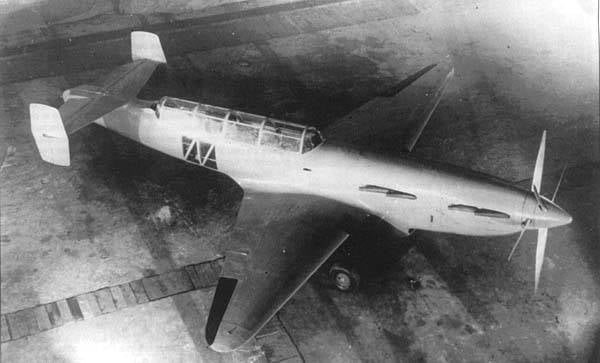 To solve this problem, he designs a twin engine installation with subsequent development at the stand. Bench tests delhi encouraging results, so in 1937, under the leadership of Bolkhovitinov developed a draft high-speed passing bomber, received the index "C" (there were several options for decoding the index: "Stalin", "Spark", "Spartak").

In parallel with the construction of a bomber OKB V.F. Bolkhovitinova, characterized by a regularly changing contingent of students who were part of it, began designing other aircraft equipped with a similar paired power plant. Thus, the project of the I-1 long-range fighter with two M-107 engines was launched.

In the Bolkhovitinov KB this machine received the designation "I". The development was carried out until the spring of 1941. It was necessary to overcome a large number of difficulties of a constructive and technological nature. However, an unexpected obstacle stopped the development of the machine. 25 April 1941 Bolkhovitinov was summoned to the meeting with Deputy Commissar of the aircraft industry Balandin. The director of the motor plant Lavrentiev and the chief designer of the engines Klimov, who were present at the meeting, reported that it was impossible to create a pair of M-107P engines.

The main cause of the failure was the excessive forcing of M-107P; it was believed that at this overstretched engine when installing an elongated shaft at working revolutions dangerous resonance phenomena could occur that would lead to the destruction of the structure. In addition, the plant had a great plan for producing engines, carried out complex work on fine-tuning M-105, M- engines 107, M-120. The Bolkhovitinov, driven into a corner, was asked to choose any other type of engine available in the country and to rework his project for it. After reflection, the designer chose the M-40 diesel engine, which, although it was heavy, consumed half the fuel.

The change of engine led to a change in the entire project. Preliminary surveys conducted in May - June 1941, returned the designer to the scheme "C".

The 1 was then included in the plan of an experienced aircraft building on the 1941, due to the great similarity of the layout and design to the C, 2М-103 and C-2 aircraft equipped with one M-103 engine (the front engine for centering was left in place, but its transmission was disconnected from the second propeller.

In general, the I-1 project was a kind of repetition of the tested “C” aircraft, but with much more powerful M-107 engines of the same engine family that the V.Ya. Klimova OKB worked on. The differences from the prototype were single-fin vertical plumage and a tail crutch, made in the form of a swinging heel of steel with a shock absorber. Oil and water radiators were developed according to the type of machine "C", but with some overestimation of the dimensions of the flow area due to the more heat-stressed mode of the engines compared to M-103. The stabilizer was performed in the usual 4,5 m scale without the use of end washers, which were necessary for the previous car for the best view back to the side gunner. The highest speed that the aircraft was supposed to develop was estimated in the draft design of 750 km / h. The climb time of 5000 m was 5 min. The ceiling - 9500 m. The shock was the calculated range - 2000 km on 0,8 Umaks.

All small-gun armament was in the wing. Behind the fairings of the landing gear were arranged two 23-x mm guns of the Volya and Yartsev VYa systems, further along the span - four large-caliber M.E. Berezina. Under the wing consoles, an external suspension of two or four caliber bombs from 100 kg to 250 kg was possible. 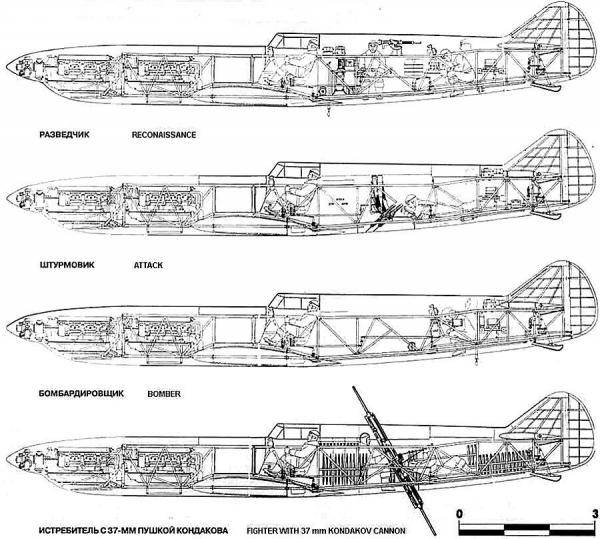 However, in the light of the well-known events of that time, and its fighter was not completed due to the redirection of the OKB activity to the near fighter with the LRE BI.
Since the beginning of the war, the E-1 theme, together with other projected aircraft, was closed. With missiles interceptor BI OKB suffered up to 1947 g.

In the I-1 project, many new technological methods for assembling, riveting and gluing aircraft parts were planned, ejection of the pilot in flight, corresponding to the speed range 600-750 km / h.
Approximately in the middle of 1941, studies of coaxial propellers at TsAGI were completed, making it possible to draw the following conclusions:
1. The efficiency of coaxial screws for large relative moves (the large step of the screw, i.e., the large step corresponds to a high flight speed) on 2 - 4% higher than the efficiency of one of the single screws in the combination.
2. In the take-off mode at angles of installation of blades less than 35 ° The efficiency of coaxial screws is slightly less than the efficiency of single screws. For large values ​​of power factor, the thrust of coaxial screws in the take-off mode is greater than the thrust of single coated screws (equivalent to the working surface) equal to the total coaxial coating.
3. In order for the power of the front and rear screws to be the same when the maximum efficiency is reached, the installation angle of the rear propeller blades must be less than the installation angle of the front screw on 1 -1,5 °.
4. A change in the distance between the screws of the combination within the limits allowed by design considerations (within the width of the blades) does not have a noticeable effect on the efficiency value,
During the war, however, it was not possible to put into practice the results of research. After its graduation from the captured German archives, it became known that in Germany, from 1941-19, extensive studies of coaxial propellers in the wind tunnel of the DVL Institute were carried out, which practically coincided with Soviet research. They coincided with the conclusions of American scientists from NACA, but, as already mentioned, the time for reactive aviation.