March 5 2015
31
Shipbuilding in the Russian Federation is increasingly focused on military orders. Despite the fact that more civilian ships were built, 80% of the proceeds to shipyards brought warships, reports Kommersant. 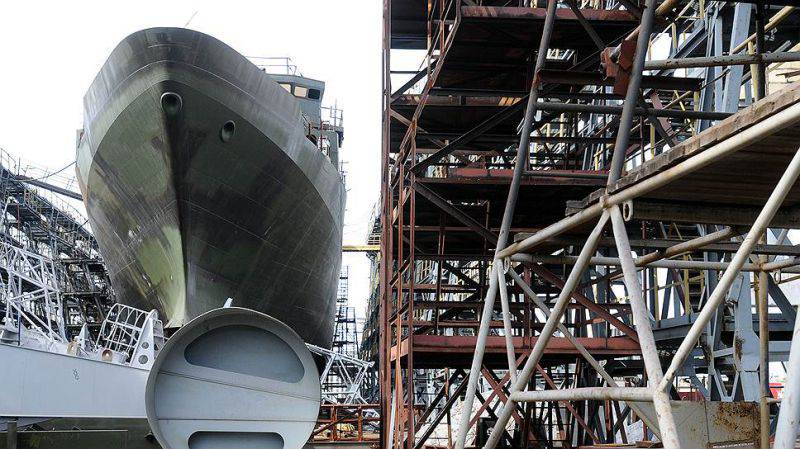 “In 2014, the volume of orders executed by Russian shipbuilders fell by 41% to 177 ships. The number of built ships decreased in both civilian and military sectors - shipyards handed over 112 civilian ships (63% of the total portfolio) and 65 warships, in 2013, these figures were at the level of 170 (56%) and 131 ship, respectively. But in monetary terms, the market declined relative to the level of 2013 of the year by only 3%, to 219,9 billion rubles, ”the newspaper said the agency Infoline-Analytics.

This was due to military orders, which accounted for about 80% (177,7 billion rubles) of the total portfolio. “For example, last year, Severodvinsk“ Sevmash ”handed over two nuclear submarines with a total value of 61 billion rubles, while the value of completed civil orders fell by 26,5% to 44,1 billion rubles,” writes “Kommersant”.

This year, the upward trend in the share of military orders continues. In the opinion of Mikhail Burmistrov, the head of Infoline-Analytics, in 2015 the value of civilian orders will drop to 15%.

“With a sharp increase in interest rates on loans and leasing and stagnation in industry, the demand for ships from Russian customers will decrease,” he said and emphasized that “lower oil prices and sanctions are fraught with the transfer of projects on the shelf and threaten the construction of Russian shipyards tanker fleetserving vessels and platforms. ”

A number of shipbuilders agreed with this, noting that “the prospect of a full launch of the“ Super Dock ”Zvezda in the Far East (the Rosneft project, USC and GPB) in 2018 looks quite vague, taking into account the delayed construction and the unformed portfolio of orders.”

“There are problems with the construction of offshore equipment on the Astrakhan Rosshelf. For example, in 2014, the LSP-1 platform, ordered by LUKOIL, was put into the sea far from the final stage of readiness and is now being completed on a rotational basis, ”newspaper sources said.

“As a result,” the interlocutors of Kommersant noted, “in the industry, the largest shipyards (Sevmash, Severnaya Verf, Admiralty Shipyards, etc.), traditionally focused on the state defense order, continue to pay him the most attention.” And other capacities capable of performing civil orders have not yet been created.

“Civilian direction often develops in the framework of not the largest shipyards, such as the Oka Shipyard,” said one source. Another interviewee said: “Now, in the absence of competencies for the construction of complex offshore and civilian equipment, it is obvious that orders for it will continue to be sent to foreign, primarily Korean shipyards, and there are no real, not planned, prerequisites for a turning point.”

Sources added that amid the reduction in defense spending, military orders could be reduced. It is planned to allocate 2020 trillion for the re-equipment of the Navy to 4,7. rub. First of all, funds should be spent on the purchase of new types of ships (surface and submarine), as well as repairs and upgrades.

“But the unstable economic situation can intervene: more than 2017 billion rubles have already been transferred under the state program beyond the 500 line of the year, and this practice will be used in the future,” a government source told Kommersant.

In addition, Deputy Defense Minister Yury Borisov said in 2013 that “the fleet needs ships with a lifetime of not 30, but 50 years, capable of going through five to six upgrades”. Thus, “the military will strive to move away from the practice of buying a large number of ships, and this position in the Ministry of Defense has remained unchanged,” the newspaper concludes.