New Libyan commander in chief and his house in Virginia

March 7 2015
22
On March 2, the Libyan House of Representatives appointed Khalifa Haftar, who had once participated in the overthrow of Gaddafi, the supreme commander. This man was a military leader in the army of Moammar Gaddafi in the era of the Chadian-Libyan conflict, later became one of the leaders of the opposition. The American journalist John Lee Anderson told a lot about this general. In his opinion, Haftar is a man of remarkable flexibility in matters of devotion. 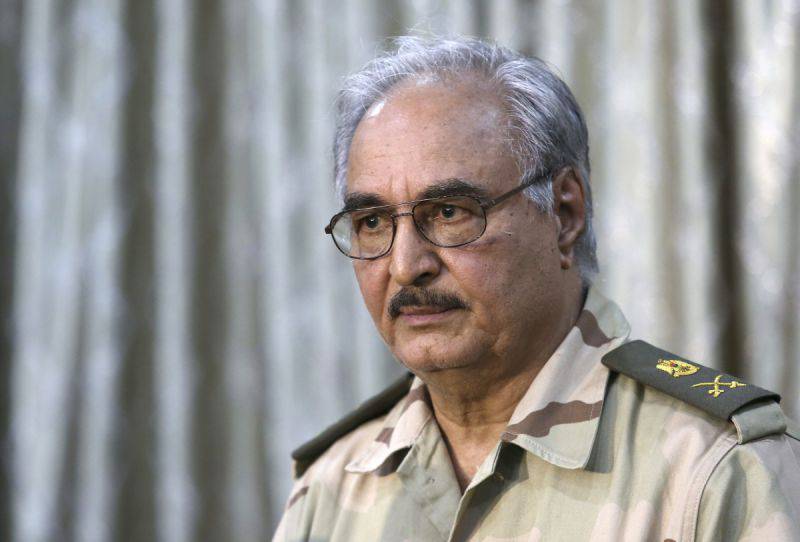 February 25 TASS With reference to Reuters, it announced the promotion of Libya’s House of Representatives Akila Saleh Isa to the post of the country's general commander, General Khalifa Haftar. The merit of this man is put in charge of the operation “Dignity” to eradicate terrorism.

March 2 RIA News" With reference to the TV channel, Al-Arabia referred the approval by the House of Representatives of the candidacy of Khalifa Haftar to the post of commander-in-chief of the units of the government army.

Journal «The New Yorker» published a great article by John Lee Anderson (Jon Lee Anderson), which highlights the curious pages of the biography of the newly created supreme commander.

The material of a journalist, an experienced author who met the general in Libya personally, is truly enormous. This is a whole story. We will choose from it the main one.

The first paragraph gives us a remarkable picture from the life of the opposition.

It turns out that only at the beginning of 2014, General Khalifa Haftar left his home in Northern Virginia, where he spent most of his time in the last two decades. Part of this time, says the journalist, Haftar collaborated with the Central Intelligence Agency. He then flew to Tripoli to launch a “last war” for control of Libya.

Since the beginning of the seventies, Haftar has participated in almost all the significant conflicts in the country and received an "unsurpassed combat experience", incidentally distinguishing himself with "extremely flexible personal devotion."

General Haftar imagines himself to be some sort of Egyptian al-Sisi and promises to destroy the Islamist forces and then bring peace and stability, for which he, however, needs to strengthen his own army.

John Lee Anderson visited one of the bases of the general at the beginning of winter. He was taken there "fighting in a Russian-made helicopter." Haftar dwells "in an immaculate furnished office": here there is a whole set of beige sofas, and a carpet in appropriate colors. The general wears an "old-fashioned mustache." Despite the khaki uniform, he looks more like a retired school teacher than a "tyrant put by the Americans", as his enemies characterize.

The general, who is already over seventy, explained to the journalist why he had returned from the United States to Libya.

After participating in the 2011 uprising of the year against Muammar Gaddafi, he tried to find a place in the politics of the new Libya, but he did not succeed. He flew back to Virginia, where he "enjoyed socializing with his grandchildren."

But in Libya it was a bad thing. The country was "sinking," ruled by "weak governments." Last summer, Islamist extremists seized Benghazi. In a brutal massacre, the murderers exterminated about two hundred and seventy lawyers, judges, opposition activists, officers, among whom were some old friends and colleagues of Haftar (from the army and the police). The general was upset and thought: “We overthrew Muammar, but what did we get in return?”

In Tripoli, he was told: “We are looking for a savior. Where is he? ”He replied:“ If I get the approval of the people, I will act. ”

The journalist is ironic, calling this man a “savior-impostor” who “admires” himself.

However, his история far more complicated than you can imagine. There is something to take note.

While still a cadet, in 1969, the young Haftar participated in a coup organized by M. Gaddafi against the Libyan monarchy. Then Haftar became one of the top officers of Muammar. “He was my son,” Gaddafi once said in an interview, “and I was his spiritual father.”

In 1987, when Libya fought Chad, Gaddafi made Haftar a commander. In Chad, thousands of Libyan soldiers were killed. Four hundred people from the people of Haftar were captured. However, Gaddafi has publicly rejected prisoners of war. Haftar was furious and urged his people to join him and stage a coup d'état. In 1988, he contacted the National Libyan Rescue Front, operating in Chad with the support of the CIA. Soon after, he was released from the Chad prison where he was.

Haftar’s activities in Chad were inglorious. Two fellow prisoners said that those who refused to join the coup remained languishing in prison cells. Haftar, who called himself the military commander of the Salvation Front, planned the invasion of Libya, but Gaddafi outplayed him by staging a “destructive coup” in Chad. CIA left with a nose. Tseerushnikam had to transfer Haftar himself and three hundred fifty of his people to Zaire, and then to the United States. Libyan received citizenship and remained in the US, where he lived the next 20 years.

Yes, fame is not made on this.

For a time, he was closely associated with the CIA, who made continual efforts through the Salvation Front to overthrow Gaddafi, making plots. However, Gaddafi also beat his opponent here: someone in Libya was captured and executed.

Haftar lived in Virginia is not at all poor, but no one knew where his money came from. He did not return to Libya, fearing execution. Everything changed only in 2011, when the position of Gaddafi was difficult to envy. It is believed that Haftar went to Tripoli not on his own will, but went on a business trip from the CIA.

In 2012-2013, the half-ruined Libya began to plunge into rapid decline. Islamists rushed to power. The rebels were not going to fold weapon. In December, 2013 introduced Sharia law in the country as the source of all legislation.

Haftar didn't like all that. In February 2014, he appeared on television and announced the unilateral dissolution of parliament and the creation of a "presidential committee" and a cabinet that will rule until new elections. His actions had all the hallmarks of a coup d'état, however, Haftar had no opportunity to make a real coup. They just laughed at him.

Meanwhile, Haftar did not sit with folded arms. He created his own army, and was supported by the “old military comrades”. In May, 2014, he launched Operation Dignity, aimed at “eliminating extremist terrorist groups” in Libya. Soon after, his troops occupied the parliament building in Tripoli.

Huftar's offensive was welcomed by many Libyans, who had become disillusioned with previous authorities. Meanwhile, opposition intensified, the Islamists attacked.

There is information that the powers of the region have stepped up aid from the army of Haftar. According to some reports, he received weapons and funding from Egypt from General Al Sisi’s “ardent anti-Islamist”. Also, weapons and money were reportedly coming from Saudi Arabia and the United Arab Emirates. Libyan extremist Islamists also did not sit without weapons and money: they were supplied by Qatar and Turkey, who supported the Muslim Brotherhood, to both. There was a war for the interests of "someone else's hands."

Once, Colonel Gaddafi made "grand gestures" to decorate Libya. But modern Libya has turned into a dustbin. New houses are built of cement blocks, they are not even covered with paint. Garbage is thrown right onto the streets. The revolutionaries behaved like stupid barbarians: they bulldozed the Gaddafi palace. The country is devastated and devastated. The oldest sculptures are broken into pieces by jihadists.

Haftar promises to destroy the Islamists, whom he once won in Benghazi. “We use all the means at our disposal to destroy them,” he told an American journalist. Negotiations to lead with jihadists he is not going. “No dialogue!”

Washington tries to dissociate himself from Haftar's “absolutist tactics”. A senior administration official told Anderson that "the US government has nothing to do with General Khalifa Haftar."

Benjamin Rhodes, deputy national security adviser and a close confidant of Obama, said the situation in Libya is alarming.

The journalist himself visited Tripoli. And although the locals were joking that the Islamists could kidnap him and take the head off, he lived there for a while, drank coffee on the street and made reports. Unlike many other cities and towns in Libya, “normal life” is found in Tripoli, he writes.

By the way, many of the supporters of Haftar in Eastern Libya believe that the Muslim Brotherhood weave threads of an international conspiracy, relying on the United States. They want to control the Middle East. It is believed that Obama is close to the "Brothers" and supports them. An example of this is the previous government of Egypt.

There is also an opinion that Haftar is waiting for the fate of Gaddafi.

However, on its basis, the general speaks with confidence about his plan to "cleanse the country." However, he complains about the lack of assistance from the United States. And Saudi Arabia helps too modestly. But Haftar’s army is growing very fast, and it needs more and more weapons and equipment.

“We are a very rich country,” he told Anderson. - We want our people to have good homes, good schools. We have oil, gold, uranium and a sea of ​​sand. It is impossible for Libya to be left alone on the planet. ”

In the meantime, let’s add in conclusion, Libya continues to fight Islamic terrorism. Of the last News it is known that Libya asked the UN Security Council to lift the arms embargo. Or make a temporary exception: the army needs weapons to fight the militants of the Islamic State and other armed Islamist groups. Libyan representative to the UN, Ibrahim Dabbashi сказал bluntly: the silence of the international community has allowed the terrorist groups to intensify.

Observed and translated by Oleg Chuvakin
- especially for topwar.ru
Ctrl Enter
Noticed oshЫbku Highlight text and press. Ctrl + Enter
We are
Why is the Libyan commander in chief going to Russia?Judgment in Tripoli. Saif al-Islam Gaddafi sentenced to death
22 comments
Information
Dear reader, to leave comments on the publication, you must to register.