March 6 2015
45
Marine Le Pen turned to Twitter to the French government. According to the leader of the National Front, the time has come to change the foreign policy of the state: "We need to change the foreign policy of France, which is now fully dictated by the United States." In addition, Le Pen called for rapprochement with Russia, which could help France defeat Islamic terrorists. 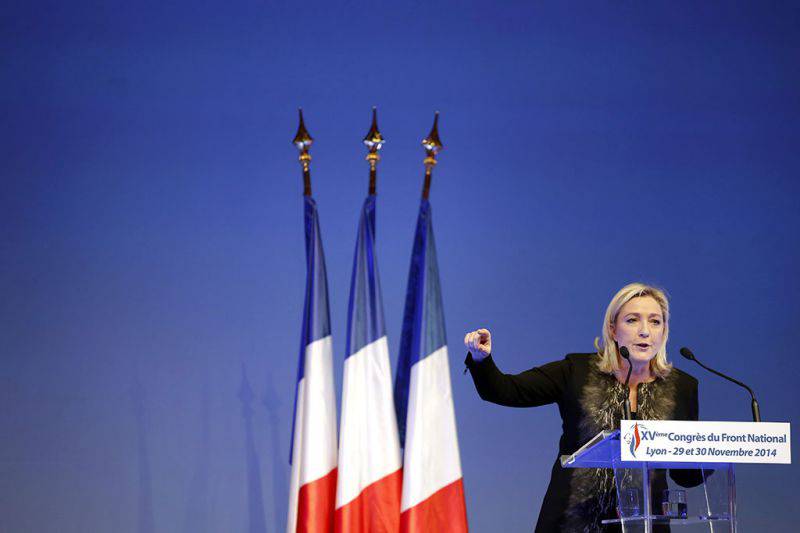 In the same "Twitter" Marine Le Pen called on the French government to restore diplomatic relations with Syria.

Le Pen's initiatives are welcomed in France with enthusiasm. It should be noted that the National Front has changed a lot since the times of Jean-Marie Le Pen, distinguished by sheer anti-Semitism and rather harsh statements. Now the party can not be called anti-Semitic. Moreover, the Jews vote for the National Front.

The other day I told about this in the magazine "Expert" analyst Sergey Manukov.

According to him, after the well-known terrorist attacks in Paris, French Jews began to treat the Marine Le Pen party differently. The fact is that if the Jewish diaspora in France has about half a million people, then there are an order of magnitude more Muslims in the country. And anti-Semitism in the Fifth Republic was not out of fashion.

But the Jews had a new defender, Marine Le Pen, whose party is now called only “political opponents” by the “ultra-right”. In 2014, the journalist “Expert” reminds, she stated in an interview that “National Front” is “the strongest shield for the protection of the Jewish population of France”.

There is no guile here. Jews see the main threat to their security in the second and third generations of Muslims who are registered in France. Many Jews believe that the party of Le Pen belongs to the attacks on Jews with much less tolerance than the centrist political rivals of the National Front.

Some statistics: in the last presidential election, every seventh Jewish voter (13,5%) voted for the representative of the right forces. Army supporters of "NF" has increased dramatically after the Paris attacks. The increase in the number of Jewish votes Marine Le Pen in the future is provided.

On the other hand, some Jews demand more from Marine Le Pen. Literally renounce the ideology of his father. Publicly, of course.

"RFI" cites a statement by the President of the Council of Jewish Communities of France, Roger Kukerman.

At the recent annual gala dinner of the Council of Jewish Communities, he said that “Marine Le Pen will remain a non-handshaking person until she declares that she is not at one with the statements of her father, for which he was sentenced by the court.”

The leader of the National Front replied: “While they are fighting the National Front ... the real danger for the French of the Jewish faith comes from the growth of the fundamental jihadist movement. Against which "National Front" fights almost alone. " She added: “Mr. Kukerman is not a judge in matters of good manners, he is not a professor of handshaking.”

Over the ocean, too, there are dissatisfied Marine Le Pen. In France, they say, something undemocratic is happening. More precisely, the Nazi. As if echoing the speeches of Barack Obama with his carbon-copy speeches, the pop singer Madonna recently stated about the problems with “human rights”. It was not about Syria, China or Russia. Madonna discovered problems with “rights” in France. Apparently, she decided to surpass Obama.

But who is to blame for the violation of human rights in France?

It turns out that the Fifth Republic is to blame for everything ... Marine Le Pen. Ultra-right, and generally so and so, almost Nazi. Madonna took and compared France with Germany since Hitler. She stated that “all this growing intolerance” is “scary” and that this is about all of Europe, but especially about France. "We live in a crazy time, which makes me increasingly think about Nazi Germany," - said the pop star.

Apparently, Madonna tormented by long-standing French nightmares. How else to explain her intransigent position to Marine Le Pen? For three years now, the pop singer has publicly declared her rejection of Marine Le Pen.

I remember that in 2012 there was almost a world-class scandal, when Madonna, having declared her concert in Paris, started working on the stage ... in politics.

The French watched a video clip in which the editors drew the Marine Le Pen on the forehead of the swastika. The case almost went to trial. Later, Madonna replaced the Nazi symbol with a question mark.

“All I want is world peace. Therefore, my first thought, when I thought about Marine Le Pen, was the desire to meet and talk with her. I would like to hear directly from her, to hear with my own ears, what exactly she thinks about human rights not only in France, but in the whole world. This is very important for me, ”said Madonna. And expressed a desire to talk with Marine Le Pen in an informal setting. And even drink a glass or two.

The statements of the Madonna conveyed "Canal +".

According to France Press, Le Pen’s first reaction was agreement. Agree to drink and talk about politics and human rights. “I’m happy to accept Madonna’s offer,” said Marin, and said that she appreciates those who take “sincere steps”.

However, the very next day on the air of RTL, the leader of the National Front rejected a proposal to meet with Madonna.

It is reasonable, we add from myself. Why make excuses, put yourself at the very beginning in a disadvantageous position?

Let the American Madonna Louise Ciccone drink better with Barack Obama. After all, who and should be asked questions about human rights, so it is to him. Let him tell her about the NSA, about Snowden, who now lives in Russia, about total surveillance of the whole world, about the CIA, the Guantanamo prison, and about the great masters of the shoulder cases. At the same time, let him explain how human rights are observed in those countries where American drones fly in. Let him talk about building democracy in Iraq and Afghanistan. Very instructive will stories. And do not have to look for human rights somewhere in France. Political work for the pop singer can be found at home.

By the way, Marine Le Pen is well aware that the further in the political sense France is from the United States, the more human rights there are in France. Therefore, he says: "It is necessary to change the foreign policy of France, which is now fully dictated by the United States."