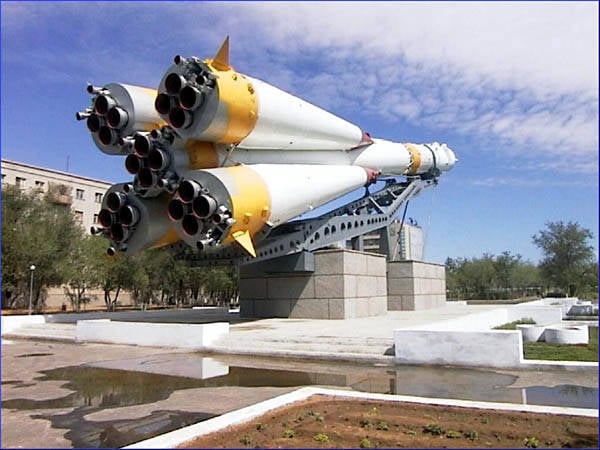 The first and once the largest cosmodrome in the world, which is still in demand by Russia, after the collapse of the Soviet Union turned out to be on the territory of independent Kazakhstan. Then he was rented by the Russian Federation together with the satellite city of the same name (up to 1995 - Leninsk). Under the relevant agreement, Russia annually pays 115 million dollars to Kazakhstan. Approximately 170 million dollars are regularly transferred from year to year to support and develop the infrastructure not only of the cosmodrome, but also of the city of Baikonur. There is a Russian government in the city itself, there is even our police. The lease term of the world-famous cosmodrome ends in 2050 year.

But, obviously, the rental contract clauses are not a decree for law enforcement agencies of Kazakhstan, which suddenly began to demand migration cards from Russian citizens living and working in the territory of the city of Baikonur. Departure from the city, which, according to an intergovernmental agreement, is under the jurisdiction of our state, is now fraught with the need for the Russians to provide these same cards to employees of Kazakhstan law enforcement agencies. In the absence of this document from our fellow citizens are collecting fines. At the moment, units had to pay them, but citizens are extremely concerned about the difficulties that have arisen. Especially considering the fact that even the migration service itself in Kazakhstan turned out to be completely unprepared for such a drastic innovation. There were no elementary forms in the required quantity.

As you know, earlier migration cards for citizens of Russia living in Baikonur did not need to fill out. A passport with a residence permit in the city of Baikonur was the only necessary document when crossing the border between Russia and Kazakhstan. In some cases, customs officers allowed the border to cross and upon presentation of a business ID. The reasons for the change in the order that had been in effect for many years are unknown. It is reported only that the leadership of the cosmodrome is considering the use of necessary measures to resolve the looming international conflict.

It seems that in Astana there are quite a few who want to let Russia not survive from the city and from the Baikonur cosmodrome, then at least significantly complicate the current conditions of its lease. This question was even put to consideration in the Kazakh parliament a few months ago. Then, during his speech, deputy Amangeldy Momyshev said that it was necessary to raise the price for the spaceport rental about 10. In particular, the following remarks were made in his address to the deputies: “Why don’t they turn to the president, why don’t they turn to the government? Ask, explain that today the price has increased ... If you compare with those years, in 5, the price has increased in 10 times. Considering this, today the minimum should be a billion! ”

Meyrbek Moldabekov, deputy chairman of the National Space Agency of Kazakhstan, then cooled the ardor of the deputy somewhat. He told parliamentarians that the expenses of the Russian Federation are not limited to annual renting in 115 million dollars. According to Moldabekov, “Russia, in addition to the rental amount, spends about 100 million dollars annually on the technical maintenance of Baikonur facilities and another approximately 100 million dollars on supporting the launch site, as a result, the amount that Russia annually invests in the cosmodrome is about 315 million dollars” . Moreover, according to Moldabekov, these expenses already seem excessive to the Kremlin, for this reason it was decided to build a new cosmodrome in the Far Eastern region. Years after 10, after putting it into operation, Russia may well refuse to rent Baikonur ahead of schedule, the deputy chairman of the National Space Agency warned its deputies.

But this is not all. According to information received in the Kazakh media, some very influential politicians in Astana today seem unfair to the existing procedure for the distribution of income derived from the commercial operation of the site of the Baikonur cosmodrome. Today they are considering the issue of changing it in such a way that a part of the Kazakh side grows and even very significantly. So, for example, in 2009, from the Russian cosmodrome, 19 commercial launches were planned and implemented, of which 12 is the Proton launch vehicle. “Each of its launch brings income of at least 85 million dollars. If you add up the amounts received in 2009 only from the launches of the Proton launch vehicle, it exceeds 1 a billion dollars. ” According to estimates of Meirbek Moldabekov, in five years the landlord represented by Kazakhstan received a little more than 0,5 a billion dollars, whereas the tenant represented by the Russian Federation annually earns more than 1 a billion dollars. There is something to think about, they say in Astana. So the sudden demand for the introduction of special migration cards for Russian residents of Baikonur may be only the first stage of far-reaching future changes.
Ctrl Enter

We are in Yandex Zen
Kazakhstan: ukro-maydannaya rot
The story of Baikonur, which was not Baikonur at all.
179 comments
Information
Dear reader, to leave comments on the publication, you must to register.