March 5 2015
25
A few days ago, Japanese Prime Minister Shinzo Abe announced that he would seek a change in the constitution, and not only the abolition of the ninth article. Analysts fear that the Land of the Rising Sun will turn into an autocratic state with all the ensuing consequences. In addition, it is not the first time when Abe makes it clear to the world community that Japan is about to turn from a pacifist state into a militaristic state. 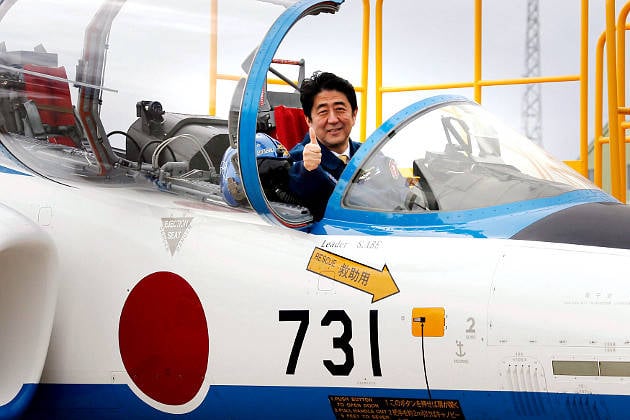 Shinzo Abe made it clear that he would seek the abolition of the "peace article", which prohibits the direction of the Japanese military abroad, said recently "Russian newspaper".

"I want to make a more active public discussion of the question of what our constitution should be in order to meet the realities of the new era," Abe said, speaking to members of the lower house of parliament.

The Japanese hawk also announced that "it will work steadily and steadily to change the constitution based on the results of the discussion."

Such statements have led analysts to declare about the autocracy, which is coming in the Land of the Rising Sun. And Abe is the face of this autocracy.

"The Japan Times" reprinted an article by Noah Smith from Bloomberg.

The author reveals a global shift trend from illiberal democracy to authoritarianism and a departure from the concept of human rights. Unfortunately, he notes, “Japan also makes this mistake.”

Yes, although Prime Minister Shinzo Abe carried out some liberal reforms (gave impetus to equality for working women and spoke in favor of increasing immigration, and the country recently recently lifted the ban on dancing in clubs), all this may not matter if the party Abe will change the constitution.

The Liberal Democratic Party ruled Japan for most of the post-war stories. Party philosophy originates from the militaristic period. Of course, party members "did not fully understand" the values ​​that the United States introduced during the American occupation, the author writes. Today, the "faction" of the undeveloped seems to be "dominant in the party."

The LDP is now leading a campaign to abandon the Constitution created according to Washington’s templates. According to the new draft, articles of constitutional provisions based on the Western European theory of natural human rights should be changed. The project provides for various restrictions that may be imposed by the state for the sake of “public interest and public order”. The draft constitution also insists on the rejection of the separation of church and state.

Even worse, Smith continues, the new project adds six new “commitments” that citizens must strictly follow. Some of them are vague, but do not bear direct harm. But the three points are an obvious step “towards autocracy”:

"People should be aware that, along with freedoms and rights, there are duties and responsibilities."

"People must act in accordance with the public interest and public order."

"The people must obey the orders of the state or its subordinate departments in a state of emergency."

According to the analyst, a similar place somewhere in China or Russia, but not in Japan. Words about the “state of emergency” are a way to disperse demonstrations practiced by many dictators from the Middle East.

The nature of such a project is an American publicist finds "deeply illiberal."

However, the West does not see this point-blank. The West fears only a revision of Article 9 of the current constitution, which prohibits Japan from having an army.

But the new project just cancels the article 9.

However, Japan already has an army (“Self-Defense Force”) and interprets the existing provision on demilitarization “so freely,” the author writes that it is unlikely that the abolition of an 9 article will “change much”.

According to Smith, the adoption of the draft LDP can lead to a catastrophe of international relations. If Japan chooses that illiberal democracy that is “now in vogue in Turkey and Hungary,” this may lead to a weakening of the country's regional attractiveness as an alternative to the “repressive Chinese state.”

At the same time, this will lead to a weakening of the US-Japan alliance: without cementing common values, the US may be tempted to take a “more neutral position between illiberal China and mostly illiberal Japan.”

The optimal solution, the publicist believes, would be for Japan to repeal article 9 of the Constitution while keeping the remaining articles intact.

Shinzo Abe leads a very conservative policy, told the newspaper "Sight" Head of the Center for Japanese Studies at the Institute of Far Eastern Studies, Russian Academy of Sciences Valery Kistanov. Moreover, the "right" policy is characteristic both for the external environment and for the internal one. The desire to amend the constitution, limiting civil liberties, confirms this.

Kistanov says: “We do not see the first signal that Abe is going to“ tighten the screws. ” Recently, a law “On State Secrets” was passed, which implies criminal penalties for disclosing information that, in the opinion of the government, may be of a secret nature. This is seen in Japan as an attack on free speech. The last proposed changes also represent nothing more than a manifestation of restrictions on civil rights and freedoms. ” And the discontent of the population will not prevent the “hawk” from making changes: “Abe is going ahead, pushing his nationalist“ right ”course.

As for the ninth article, which practically prohibits Japan from using force in solving international conflicts, the United States supports the decision of Abe to abandon it.

This is not surprising, add from myself. Indeed, earlier, last summer, the Japanese government adopted a resolution allowing the armed forces to act on the territory of other countries. The main condition that Japan has set for itself: the need to protect "friendly countries".

What are these countries, of course. Japan gathered to defend the United States.

Recall the July report of the Associated Press, cited by the Washington Post (translation - "InoSMI"):

“Since Japan's defeat in World War II, its army has been shackled by the constraints imposed by the victorious US, and after a while most Japanese adopted this (concept). Now the shackles are loosening. The Japanese cabinet on Tuesday approved a new interpretation of the country's pacifist post-war constitution, which now allows the army to help defend allies and other countries that have “close relations” with Japan in a concept known as “collective self-defense” ... <...> Prime Minister Shinzo Abe said the changes are necessary to protect the lives of the Japanese in an increasingly security-strained environment. Japanese warships can help protect the American ships guarding Japan, he said.

Washington immediately welcomed the resolution. An incomparable psaki appeared. “Japan has every right to equip itself as it sees fit. We urge her to do it in a transparent manner and continue to constantly keep in touch with her about this, ”quotes the spokeswoman for the US State Department. Rosbalt.

It’s easy to find the origins of the White House’s approval: “legally” the belligerent Land of the Rising Sun is needed by Washington to contain China.

So, Japan is a state that should play a certain (apparently first-planed) role in Washington’s confrontation with the growing Beijing. The Chinese power is growing before our eyes, and the American bosses, who still claim hegemony, are not like it.

The result is that Shinzo Abe in the reshaping of the ninth article of the constitution relies not on the opinion of his people, but on ... the approval of the American president.