Algeria is on the verge of a new civil war 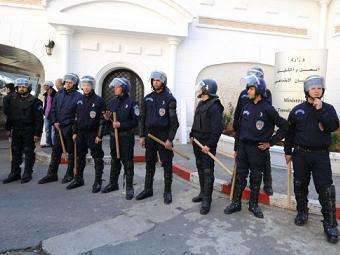 The information war against Algeria continues. Western media and politicians stigmatize Algerian President Abdelaziz Bouteflika for the lack of a “developed democracy” in the country. The TV channels that have become the real mouthpieces of the infoway — Al-Jazeera and Al-Arabia — have noticeably increased their attention to Algeria and regularly travel through the “corruption regime” that “oppresses its people.”


After the fall of Tripoli, Italian Italian Prime Minister Berlusconi declared unrestrainedly that Italy plans to replace Algerian natural gas with Libyan in the near future. This is rather strange, since there was no reason for dissatisfaction, Algeria regularly fulfilled all the agreements. The conclusion is obvious, the West is not satisfied with the Algerian regime itself, which must be “modernized”. Earlier, Western countries Algerian corruption, lack of democracy, civil liberties, unemployment of the people did not care at all, etc.

It is clear that the West does not want to fight, the Libyan war is not over yet, and it has spent a lot of resources on it. The favorite method of Westerners is to rake in the hands of someone else's hands.

Conditions for a “color revolution” in Algeria

- Socio-economic problems. In this regard, the Algerian state has the same problems as other Arab countries: approximately 13% of the population are unemployed, among young people the unemployment rate is even higher, and up to a quarter of people live below the poverty line. And the country receives annually tens of billions of dollars from the export of oil and gas. The economy is developed unilaterally - the country exporter of raw materials. The oil and gas industry provides up to two-thirds of the budget revenue and 95% of export earnings. Dependence on raw materials buyers - USA, Italy, France, Spain, Holland, Canada. Algeria is also dependent on imports - they import food, manufactured goods, consumer goods, that is, if the West goes for economic sanctions, the regime will be in great trouble.

- National map. Kabyl Berbers (also known as Amazighs) make up 16% of the population and among them are strong separatist, autonomist sentiments. In addition, France traditionally has strong positions among Kabil organizations, many of them are based on the territory of the French state.

- Weakness mode. The power of Bouteflika is not popular not only among the Kabils, but also among the Arab population of the country. Thus, in mid-June, the Algerian authorities convened a nationwide conference to discuss the further development of the state, and only representatives of the managed opposition were invited to it. The actions of the authorities criticized the well-known Algerian author Mohammed Molesehul (he used to write under the pseudonym Yasmin Khadr): “It’s necessary to listen not to those who represent no one, but to the desperate youth, the unemployed, all Algerians without exception”.

- Islamist map. The positions of radical Islamists are traditionally strong in Algeria. Not so long ago ended the civil war (1991-2002) which claimed tens of thousands of lives. The victory in it was gained by the government forces, but the “roots” were not uprooted, the social and economic problems were not solved. Therefore, the position of the radical Islamists is getting stronger again. Moreover, they now have support not only in Mali, but also in Libya, receiving weapon from the looted arsenals of Gaddafi.

Islamic ideals of justice are very popular against the background of corruption, bureaucracy, luxury of the country's leadership.

- Activization of the opposition. Their protest actions are held by reservists (60 thou. People) - these are the people who were called to fight the Islamists in 1995-1999 years. Thanks to reservists, the authorities were able to make a break in the war. Now they complain, they have won, but they have not been encouraged. And the losing Islamists and the surrendered Islamists received not only an amnesty, but also great benefits, including various monetary compensations and housing for large families.

The democratic opposition and the students are also conducting their actions. Students need to reform the higher education system. The opposition believes that all Bouteflika promises are empty declarations that are not confirmed by deed. The regime's actions are aimed at preserving the power of the ruling elite. So, mass protests are still not allowed, do not register opposition parties 10, there is no progress in the area of ​​constitutional reform.

Currently, all major opposition forces are uniting around the National Coordination for Change and Democracy (NCID) alliance, this alliance holds its own mass marches that are officially banned almost every week. It contains a spectrum from moderate Islamists to socialists. Already, the Algerian opposition presented its program on 24 in April: the resignation of the president, the dissolution of all current institutions of power, the creation of a transitional interim government, the holding of free elections in Algeria and the development of a new constitution of the state on the basis of a general national consensus.

It looks good, but given the specifics of this Arab, eastern country, its implementation will lead to the realization of the scenario that we are well aware of. In Russia, we see similar phenomena in the period from 1917, when the February Revolution led to the Civil War and the complete collapse of the country's economy, its dismemberment. In Algeria, during the new civil war, radical Islamists have a chance to win (a kind of Bolsheviks, they have a great Idea and self-righteousness, a willingness to shed a lot of blood - their own and others', for Islamic ideals).

Naturally, in such a situation there are many weak points that can be used until the complete destabilization of Algeria.

We are in Yandex Zen
Judgment in Tripoli. Saif al-Islam Gaddafi sentenced to death
The active phase of the "Sea Breeze-2013" exercise has been completed.
7 comments
Information
Dear reader, to leave comments on the publication, you must to register.