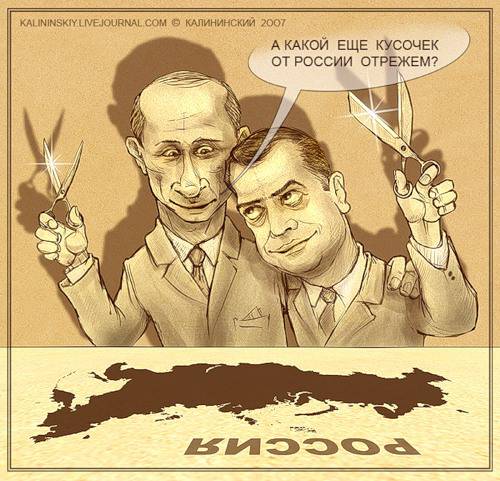 Russia is a generous soul. Generous and stupid. Lost a hundred years, and we at least henna. As if eternity lies ahead and there is no death.


On the street of ultraconservatives endless holiday. The words from textbooks have returned and continue to return to our everyday life. stories and books written a century or even a couple of centuries ago. Returned "lord" (the presence of the lord always implies the presence of a slave, no?), "Police" (I don’t like this word about Soviet films about war), "thought" (this is how bearded boyars, dirty sleeves sweeping dirty floors) "(I am not against charity, but only the state should deal with social protection, preservation of cultural values, etc., but it has thrown off this task from itself). The forgotten notions “gladden” the ears: “homeless”, “governor”, ​​“beggar”, “homeless”, “prime minister”, “prostitution”, “owner of newspaper-steamboat factories”, “shelter”, “pro-boomers” "... Stalinated on the map St. Petersburg (somehow located in the Leningrad region), Samara, Nizhny Novgorod, Tver. However, this is still okay ... The impetuous bureaucratic bribery and arbitrariness, the concept of “inventory of property for debt,” returned to us, tacitly serving the interests of the authorities (I am not against the church, I am against “service” ). Somewhere in the corners of the swarming princes, counts and other nobility. The expression "war in the Caucasus" is again relevant. On the throne, as of old, the king-father. And let it be a few dvuhgolov, but how it looks organically under the returning feather-clawed coat of arms.

Returned, it was completely strangled, animal nationalism. The sonorous word "mayhem" is with us again! Only now it’s not actually “Kill the Jews, save Russia!”, But “Beat the Caucasus!”, The same one being saved. Although, in this case, "returns" is not quite the right word. "Grows up" - where more truly. It is beneficial for the authorities to translate the direction of social discontent from class contradictions to interethnic ones.

The past is coming. A lot of things back. A little more - and Lev Tolstoy, Dostoevsky, together with the aforementioned Gogol and Saltykov-Shchedrin, will be able to give literary awards "for topical works that most accurately reflect the essence of time." Truly classic is immortal!

There are endless debates about the Soviet past on TV. Was it good or bad? Kurginyan against Svanidze, Prokhanov against Solovyov ... I have a very good attitude to both Kurginyan and Prokhanov. But in this case, they are deliberately drawn into an empty discussion. In raking last year's snow.

If you look closely, then the past, we are increasingly trying to slip some suspiciously smelling. There was a mass of speculators like Fomenko, Nosovsky and others like them, who turn the whole history of the world upside down. People have a mess in their heads, and here they are with their discoveries. I don’t even speak about fabrications regarding the Soviet period of history. Here every liberal slept.

We get stuck in the past. Whether it is real, fake, but we get stuck ... We are drowning in it, like flies in honey.

I understand that there is no future without the past. Only now, while we are looking into the past, we are trying to give it a rating-reappraisal, we are trying to get it back, efficient figures, children of the new time, steal our present and future.

The present is that we in all respects are rapidly turning from a state into a third world country. Diligently we put on the familiar Procrustean bed of the raw materials appendage. Two hundred years ago there was: wood, hemp, tar. Now: wood, oil, gas. What is the difference then? Although hemp and tar still had to be done. The fact that we are gradually exporting weapons, nuclear and space technology - this is all the eating away of Soviet stocks. Sooner or later they run out. Nothing like nuclear or space projects — breakthroughs of modern Russia are not on the shoulder. Talking about the science city of Skolkovo and nanotechnology is nothing more than a Cheshire cat smile. Science and industry in all its forms are systematically destroyed in the country. I work at the factory myself, I know what I'm talking about. For the country of the "third world" is preparing the relevant population. Education reform is underway. A few items for free, the rest for money. (Works and physical education - for free). Television makes discovery after discovery in the only science that is rapidly developing in the Russian Federation - moron science. (To be honest, I don’t even want to write about TV, it just makes me sick). Raw appendage does not need smart and educated people. He needs a blunt-smiling hardworking obedient mass, such as Asian migrant workers. Yes, and that should not be too much. Do not get enough poop.

And so, against the background of such and such realities, endless digging in the past is underway. Ivan the Terrible - good or bad? Is Stalin a tyrant or creator? Nicholas the Second - is it holy or is it? Was the USSR preparing to attack Germany or not preparing? Who and whom shot at Katyn? Is there anything to celebrate on November 4 or nothing? You can argue hoarse. But you can't feed tomorrow's children with yesterday’s soup.

Why are so many serious and educated people turned to the past? Why their mind, observation, ability to draw conclusions do not apply to the present? Reality does not apply? What is around, above and under your feet? In addition, in what they themselves live and what children will live? Why? Scary them? Maybe. In a police state, it was always dangerous to deal with reality. It is not clear what is happening with the country? Also possible. But if it is not clear for them, the best minds, - what should the rest do?

In the country - minus a million people a year (and this is taking into account the influx of migrants from Asia!). We need to think about these lists of losses first of all, and not about the fact that in the Great Patriotic War we, allegedly, “threw corpses into Germans”.

The country has no concept of development. No vector. The meaning of life, in the end, no. That is why it should, indeed, become scary, and not on the scale of Stalinist repression.

In people's heads, chaos, smoke, snatches of thoughts. Everyone builds the future within their apartment. And why does a country exist? Why should a country exist? What will happen to her tomorrow? That's what you need to think about! But who will answer these questions if so many minds are preoccupied with looking at faded photos and analyzing News a hundred years ago? A society living in the past has no future.

And so, to hell with the past! Leave him alone. Beginning with “perestroika”, for almost three decades, we have stood there, and we can’t move. And it is the past, everything arrives and arrives ...

It's time to start thinking ahead. Engage in the present. And the future.

We are in Yandex Zen
The soldier has an eternity ahead
Abandoned and forgotten
14 comments
Information
Dear reader, to leave comments on the publication, you must to register.