February 25 2015
31
International exhibitions of arms and equipment contribute to the emergence of new messages on various results of the defense industry. Now the UAE is hosting the IDEX-2015 exhibition, due to which a number of interesting people were published in just a few days News about the recent successes of the Russian defense industry in general and the Uralvagonzavod corporation in particular. This corporation is currently the only domestic organization involved in the development and construction of tanks. In recent days, some information has become known about her current work and plans for the future.


On February 20, Vedomosti published news about the next contract, which implies the cooperation of Uralvagonzavod with a foreign customer. With reference to representatives of the defense industry, it is reported that last year Rosoboronexport signed a new contract with Algeria, according to which a licensed assembly of the main T-90 tanks will be established in the African state. Probably, this is an export modification of the T-90С or its updated version of the T-90СМ. Russian specialists will train their Algerian colleagues and will also manufacture assembly kits. Ready tanks will be assembled from the supplied components at one of the tank repair plants in Algeria, which already has some experience in servicing Russian-made armored vehicles. 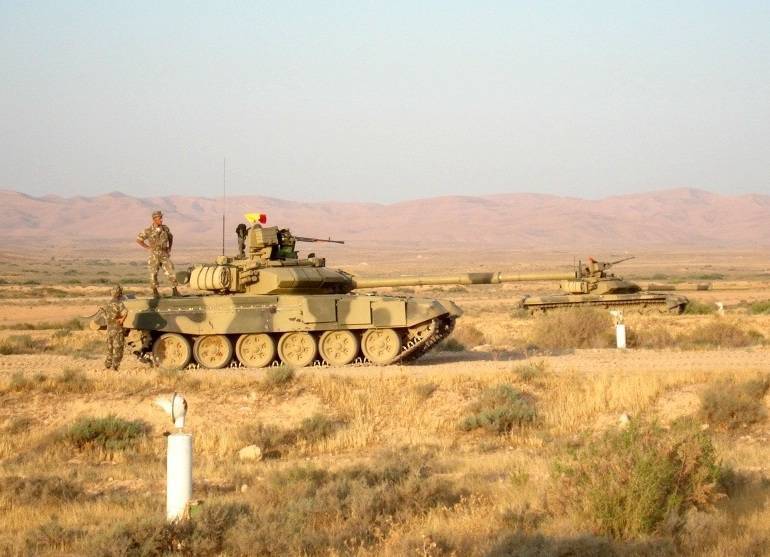 As a result of the implementation of the signed agreement, the Algerian Armed Forces will receive 200 new T-90 tanks, which will complement their existing equipment. In 2010, the Algerian military ordered X-NUMX T-185 tanks from Russia. Deliveries of this equipment, delivered in finished form, ended several years ago. In 90, there was an order for the supply of about three hundred sets for the modernization of the T-2013 tanks that were in the army. Now 72 armored vehicles will have to join this technology, which meets the basic requirements of modern times.

The signed contract is of great importance for the domestic defense industry. According to various estimates, the total cost of assembly kits and related work can reach 1 billion US dollars. Thus, the new contract can be at least one of the largest and most expensive agreements for the supply of Russian military equipment.

Of particular interest is the approach of the Algerian military to the acquisition of Russian armored vehicles. The T-90 tanks of the first batch, delivered in accordance with the first contract, were fully assembled in Nizhny Tagil and were sent to the customer in finished form. This time, Algeria wants not only to update the fleet of equipment, but also to give impetus to the development of its defense industry. It is noteworthy that this approach has been actively used in recent years by India, which is also a reliable partner of Russia.

The current contract is a further continuation of Russian-Algerian cooperation in the military-technical sphere, which began in the middle of the last decade. In 2006, countries agreed to write off Algerian debt for future contracts. To date, the Algerian army has acquired from Russia various equipment and weapons worth about 10 billion.

Corporation "Uralvagonzavod" is currently engaged in the development of a promising main battle tank "Armata", which in the future will have to replace obsolete technology. A few years ago it was announced that for the first time the new tanks would be shown to the public at the 9 parade on May 2015. The latest news on this topic suggests that all works are on schedule. In early February, the general director of Uralvagonzavod, Oleg Sienko, announced that in February and March the Ministry of Defense would receive the first batch of new tanks. These cars will take part in the tests, and in May they will come to Red Square. After the Victory Parade tanks will return to the landfill. February 22 O. Sienko recalled the preparation of the first batch of tanks "Armata". These vehicles are already being prepared for delivery and will be handed over to the military shortly. 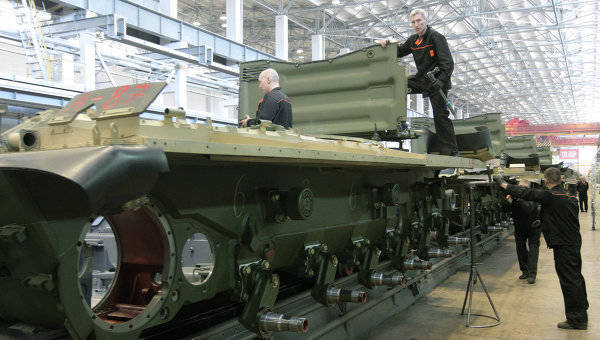 February 19 published a press release about the upcoming show of the new development of the Petrel Research Institute, part of the Uralvagonzavod Corporation. Specialists of "Petrel" developed a new uninhabited combat module designed for installation on various armored vehicles. The new system is a logical continuation of the ideas embodied in the project of the Atom combat vehicle shown earlier. The new combat module is a small turret with a set of necessary equipment and weapons. The main feature of the module, which determines its characteristics, is the used automatic gun caliber 57 mm. Such a “main caliber” is expected to maintain acceptable parameters for weight, recoil and ammunition, as well as provide a noticeable increase in firepower in comparison with existing 30 mm caliber guns widely used on various armored vehicles.

So far, only a few photos of a promising combat module have been published. Moreover, even its exact name remains unknown. In the near future, a new module can be installed on armored vehicles, which is now being worked on by employees of the Uralvagonzavod Corporation and related enterprises. It is reported that work is currently underway to integrate the new Russian module into the complex of equipment of the new armored personnel carrier with the wheel formula 8х8, developed by Emirates Defense Technology (UAE). This will probably be the new Enigma BTR, first introduced a few days ago at IDEX-2015. 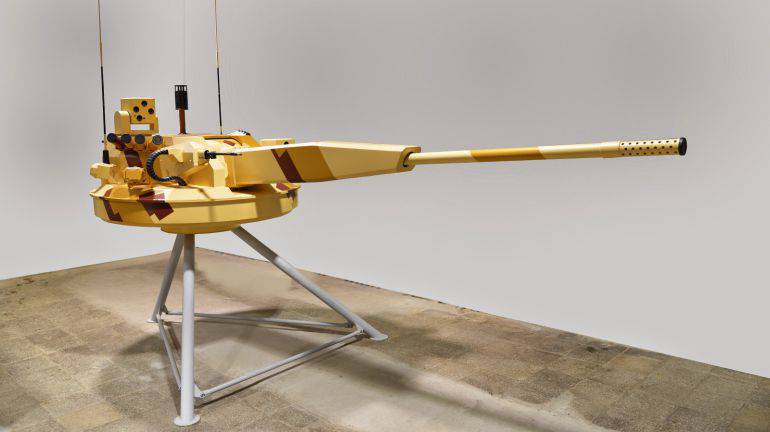 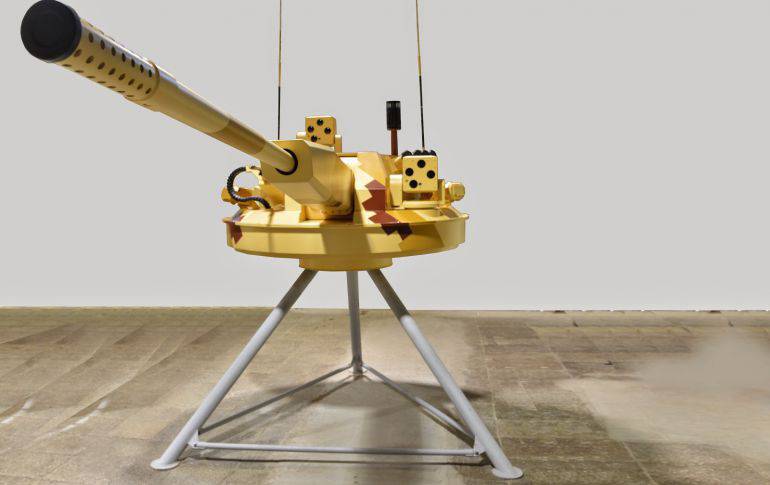 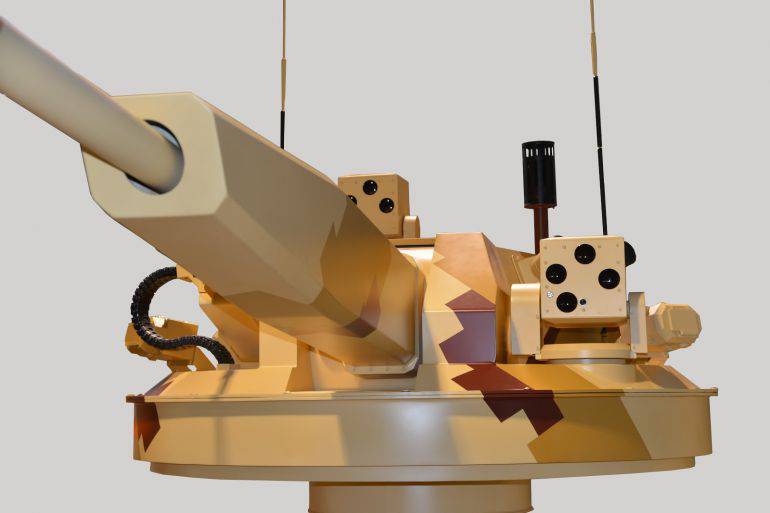 Interestingly, the Atom project mentioned above should still lead to some results. A promising wheeled armored vehicle "Atom" was created by the corporation "Uralvagonzavod" together with the French company Renault Truck Defense. In accordance with the existing agreement, the French side was responsible for the base chassis, and the Russian side was responsible for the weapons complex and some other units. Last year, joint work on the Atom project ceased due to the introduction of sanctions by the EU against Russia. In this regard, the corporation "Uralvagonzavod" was forced to begin the search for a new partner for the implementation of a promising project.

February 22, on the opening day of the IDEX-2015 exhibition, general director of Uralvagonzavod spoke about the present and future of the Atom project. According to him, a new combat module was made (probably, the recently announced module with the 57-mm cannon was meant), and work began on the creation of a new basic armored vehicle. The corporation has a new foreign partner who wants to get a promising wheeled armored vehicle. A new project is being developed in accordance with the requirements of a specific customer, which, however, has not yet been named. Nevertheless, there is reason to believe that O. Sienko spoke specifically about cooperation with Emirates Defense Technology and its Enigma project.

The corporation "Uralvagonzavod" and its member organizations are engaged not only in the sale of existing and the creation of new types of equipment. Much attention is paid to the modernization projects of existing armored vehicles, aimed at improving their performance. The other day it became known about the completion of work on a new project for the modernization of export tanks. Now "Uralvagonzavod" is ready to begin serial construction and supply of T-90CM tanks, designed specifically for countries with hot climates. First of all, the states of the Middle East, including those located on the shores of the Persian Gulf, are considered as potential buyers of this technology.

February 24 online edition Lenta.ru published an interview with the chief designer of the Ural Transport Engineering Bureau Andrei Terlikov. The specialist spoke about the main features of the new modification of the T-90CM tank, intended for delivery to countries with hot climates. To ensure the operation of the tank at high air temperatures, the engine cooling system was seriously modified. Now the diesel power plant can operate without power loss at ambient temperatures of up to 50 ° C. In addition, the machine is equipped with a set of air conditioners that cool the air inside the habitable volume. Also, operation at high temperatures necessitates completing the new tank with a barrel bend sensor. 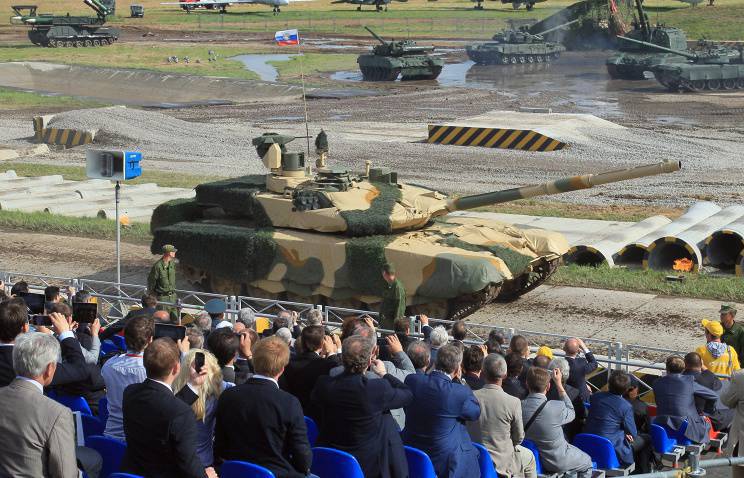 Development of the "Middle Eastern" version of the T-90CM tank has already been completed. In addition, this machine is tested in difficult conditions. Last Sunday, O. Sienko, general director of Uralvagonzavod, said that T-90CM tanks had been tested in Kuwait. The machine has shown itself well in difficult conditions of high dustiness. Now several countries in the Middle East are exploring a new Russian armored vehicle and are deciding whether they need such equipment.

Corporation "Uralvagonzavod" is ready to begin mass production of new tanks in case of receipt of the corresponding order. At the same time accurate information about the possible supply is not yet available. Based on the latest news, it can be assumed that the updated export T-90CM can be supplied to Algeria in accordance with last year’s contract. However, exact information on this score is not available, and the details of the Russian-Algerian contract have not yet been published.

The latest news vividly shows how things are going with the corporation Uralvagonzavod, which now has all the tasks of developing and building tanks, as well as other types of armored vehicles. The implementation of several projects aimed at re-equipping the Russian ground forces and supplying equipment to foreign customers continues. In addition, some projects are being developed in collaboration with foreign colleagues. All this suggests that the domestic tank building could survive the crisis of the previous years and the armed forces will not be left without new tanks. 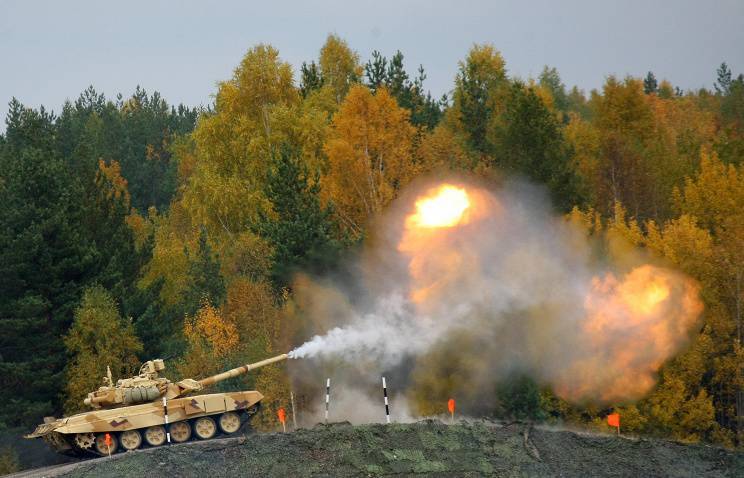 Ctrl Enter
Noticed oshЫbku Highlight text and press. Ctrl + Enter
We are
The action “Military service under the contract is your choice!” In Rostov-on-Don: future contract servicemen, exhibitions and “Russian Knights”The first results of the exhibition IDEX-2013
Military Reviewin Yandex News
Military Reviewin Google News
31 comment
Information
Dear reader, to leave comments on the publication, you must sign in.