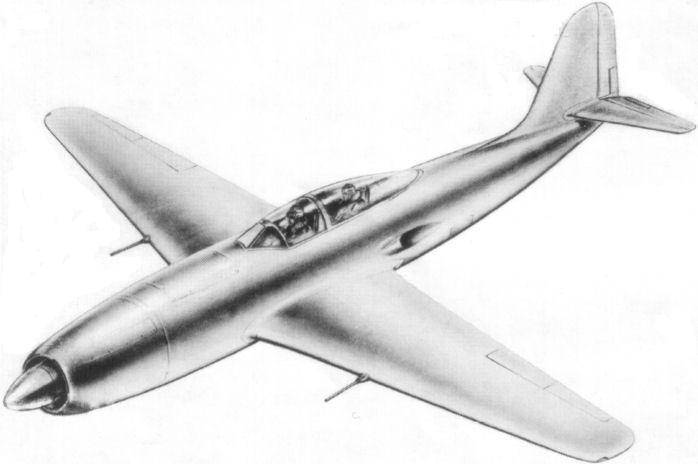 At the end of 1948, a preliminary draft design of a two-seat escort fighter for the VK-2 turboprop was completed at the Sukhoi Design Bureau.

The explanatory note to the project noted that: “The issue of creating escort fighters for long-range Tu-4 type bombers has so far not been resolved due to the lack of a suitable engine. In connection with the planned release of the VK-1949 TVD in 2, a technical opportunity appears to build such a fighter with a range of 5000 km and a maximum speed of 800 km / h. This speed, although inferior to the speed of a modern jet fighter, however, will be sufficient for an escort fighter, since The latter must fight mainly in maneuver, not looking far away from the escorted group. The maneuverability of the escort fighter with the VK-2 engine, despite its relatively large weight (8 and the target), will not yield to the maneuverability of a normal fighter with a jet engine. This is explained by the fact that at high speeds maneuverability will be determined mainly by the specific load on the wing and engine power.
In the proposed project, the escort fighter accommodates two pilots. This allows the main pilot to reach the target with more fresh forces, and in addition, the co-pilot can provide substantial assistance in a combat situation ... "

During combat use of the escort fighter, it was assumed that most of the route would be at 12000 m. The meeting with escorted bombers was planned at a distance of 300-500 km from the target at 10000 m. In this case, the technical range of the flight reached 5000 km. Accompanied throughout the entire route at an altitude of 10000 m, the flight range decreased to 4500 km.
According to the draft design, the aircraft was a low-wing all-metal monoplane.
The fuselage has an oval section, in front of which a turboprop engine was installed. The front and rear of the cockpit housed fuel tanks. In the center section, under the floor of the cockpit was a compartment of the main landing gear, as well as the third fuel tank. 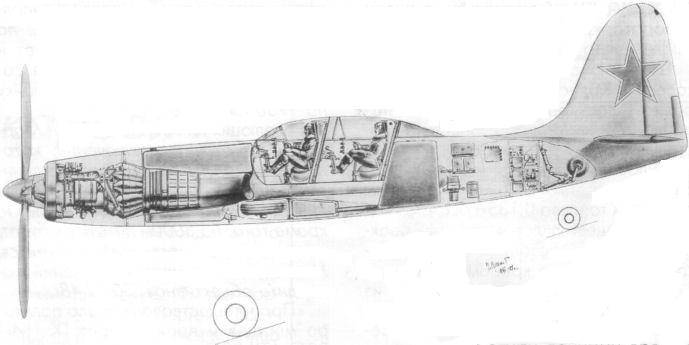 In the rear fuselage was located equipment. Hermetic cockpit was equipped with ejection seats. Aircraft control is dubbed.
Wing cantilever, trapeziform shape in plan with an elongation equal to 7,5. Under the wing tips attached additional fuel tanks.
The plumage, including the stabilizer with the elevators and the fin with the rudder, was mounted in the rear fuselage.
The power plant consisted of VD VK-2, power 4200 HP, with specific fuel consumption 0,135 kg / hp.h. The removal of gases was carried out through two jet nozzles located on the sides of the fuselage, behind the wing.
The aircraft’s armament consisted of two fixed guns, the HP-23, mounted in the wing, with a total ammunition 400 ammunition.
Chassis - tricycle with tail wheel. The wheels of the main supports were removed along the span in the toe of the center section, and the tail wheel in the tail section of the fuselage.
The cockpit was equipped with a standard set of flight-navigation instruments (duplicated). Air navigation was carried out using ARC-5 and avtoshturmana. To facilitate long piloting established autopilot. Two radio stations provided communication with the ground: VHF - Klen, KV - RSB-5.

The project was referred to the command of the Air Force, in November 1948, the deputy. The chairman of the ATC of the USSR Air Forces, Major General of the IAS N.A. Zhemchuzhin, reporting to the Commander-in-Chief of the Air Forces on the proposal of P.O. Sukhoi, noted: with ASH-73ТК and TRD РД-45, which was built according to the plan 1947-48. and the decision of the Council of Ministers was terminated by the building.
Creating an escort fighter with these data is hardly advisable, albeit with a different motive group ... ”

Fighter Pashin in the series did not go and there is no data about him. And Sukhoi fighter remained in the sketches. Although the car looked very promising for the USSR Air Force not only as a long-range escort fighter, but also as a long-range reconnaissance aircraft (5 000 km range) and especially as a high-altitude anti-aircraft trapping interceptor (practical 14 000 height m (!)).
Apparently, this was the last project of a single-engine propeller fighter of the Soviet Air Force.
27 November 1949, by decision of the MAP of the USSR, the design office of P.O. Sukhoi as part of the 134 plant was disbanded.