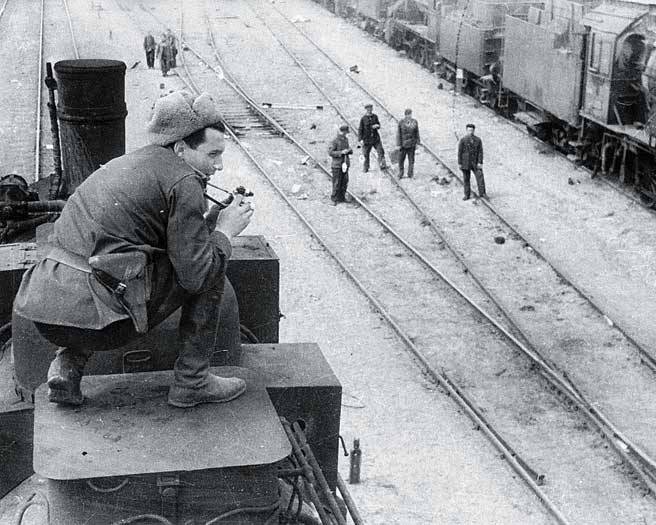 Immediately after the start of the Great Patriotic War, hundreds of thousands of young people voluntarily went to the military registration and enlistment offices. Among them were representatives of various professions, including photographers. In the first days of the war, when it was not time to perpetuate events, when everyone thought only of giving the enemy a fitting rebuff, many of them found themselves on the fronts as foot soldiers or combat engineers. But by the beginning of the second half of 1941, representatives of narrow specialties or athletes began to withdraw from the front line and be sent to perform military duty in accordance with their specialty. In peacetime, everything connected with the use of some technical means may seem like a certain sinecure. But such a characteristic is hardly appropriate for the activity of a front-line photojournalist, or a photographer.
Employees of central newspapers or small divisional or regimental mnogoyrazhek risked their lives no less, and even more ordinary fighters. In contrast, the correspondent did not have rifles or machine guns in his hands. All the weapons were the FED camera or the legendary Leica (Leica - from the German Leitz Camera).
No matter how they subsequently criticized the work of front-line photos and cameramen, people were offended by the Soviet authorities, but it was with a “watering can” and a notebook that thousands of our compatriots carried their service on the war fronts. Who are they - these representatives of the Soviet intelligentsia, employees of the central newspapers of the capital and provincial photographers of Samara, Mariupol or Stalingrad? This is Dmitry Baltermants, who shot the construction of defensive fortifications on the outskirts of Moscow for the newspaper Izvestia. This is Natalia Bode, who went to the front as a volunteer and filmed the entire war for the small newspaper “The Red Army” of the Southwestern Front. This is Robert Diment, who served as the head of the photobureau of the Political Directorate fleet. Emanuel Evzerikhin, Andrei Zukka, George Zelma, Mark Redkin and hundreds of other officers of the Red, and later the Soviet Army.
Of course, the shooting of photojournalists was not always attended by scenes of the fighting. It could be domestic scenes, portraits of the Red Army for publication in newspapers and even wedding photography or friendly feasts. The war could not kill in people the natural need to love, to enjoy life.
Nowadays, it is difficult for us to imagine all the characteristic features of fulfilling the tasks of photo reporters. First, all the pictures had to meet the standards of political correctness of the time. Secondly, the special department and SMERSH military counterintelligence did not sleep either. A man with a camera at the front line may be the enemy. Therefore, correspondents simply could not shoot everything and worked with a constant eye on the admissibility of photographing certain events or technology. Nevertheless, he created a voluminous and eloquent chronicle of the events of the terrible years of the war. These materials for many years will excite the imagination of representatives of more than one generation.
The profession of a war correspondent has not lost its significance even today. With the only proviso that one snapshot of a military newspaper employee accounts for 20-30 photos of military paparazzi. This was especially vivid during the military operations in Chechnya. It is hard to imagine a person in a war who always looks like a hero of a propaganda poster. Any fight is the ultimate nervous tension, fear, a surge of aggression. Turning out to be material for photosets such plots became a real ideological weaponsaimed at undermining the authority of the Russian army. However, this shift in focus has not been able to discredit the work of this front-line photojournalist.

We are in Yandex Zen
Azerbaijan hosted a military parade
1 comment
Information
Dear reader, to leave comments on the publication, you must to register.