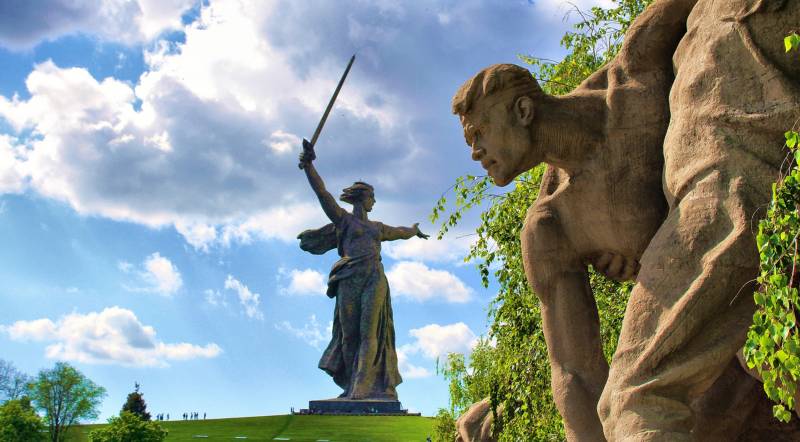 Few people know that one of the most famous and highest Soviet sculptures - “Motherland Calls!”, Which is installed in Volgograd on Mamayev Kurgan, is only the second part of the composition, which consists of three elements at once. This triptych (a work of art consisting of three parts and united by a common idea) also includes monuments: “Rear - to the front”, which is installed in Magnitogorsk and “Warrior-Liberator”, located in Treptow Park in Berlin. All three sculptures are united by one common element - the Sword of Victory.


Two of the three monuments of the triptych - “The Warrior-Liberator” and “The Motherland Calls!” - belong to the hand of one master, the monumental sculptor Yevgeny Viktorovich Vuchetich, who in his work addressed the theme of the sword three times. The third Vuchetich monument, which does not belong to this series, was installed in New York in front of the UN headquarters. The composition titled “Cut Swords into Plowshares” shows us a worker who forges a sword into a plow. The sculpture itself was to symbolize the desire of all the people of the world to fight for disarmament and the onset of the triumph of peace on Earth.

The first part of the trilogy “Front-Front”, located in Magnitogorsk, symbolizes the Soviet rear, which ensured the country victory in that terrible war. On the sculpture worker passes the sword to a Soviet soldier. It is understood that this is the Sword of Victory, which is forged and raised in the Urals, later it was raised by the “Motherland” in Stalingrad. The city in which a radical change occurred in the war, and Nazi Germany suffered one of its most significant defeats. The third monument of the “Warrior-Liberator” series lowers the Sword of Victory in the very lair of the enemy - in Berlin. 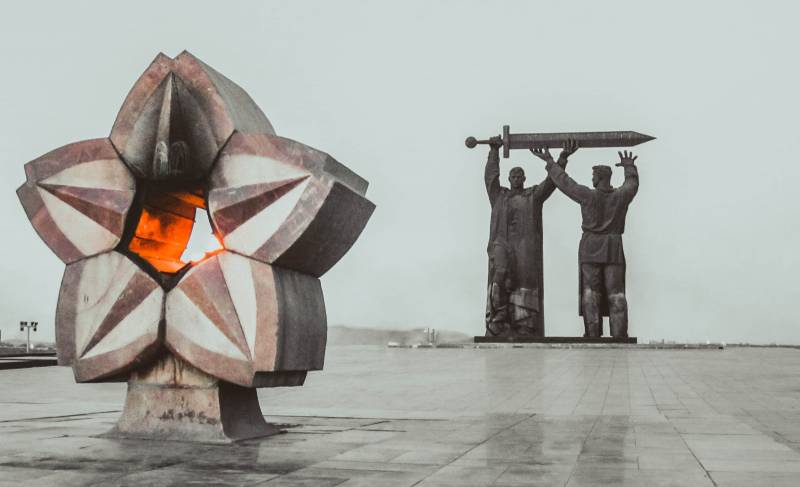 The reasons why it was Magnitogorsk that was given such an honor - to become the first Russian city in which a monument was erected to workers in the rear should not surprise anyone. According to statistics, every second tank and every third projectile during the war was released from Magnitogorsk steel. From here and such symbolism of this monument - the worker of defensive factory standing in the east, transfers the forged sword to the soldier-front soldier who goes to the West. Where the trouble came from.

Later, this sword forged in the rear will lift up the Motherland Motherland in Stalingrad on Mamayev Kurgan. In the place where the change occurred in the war. And at the end of the composition “The Warrior-Liberator” lowers the sword on the swastika in the very center of Germany, in Berlin, completing the defeat of the fascist regime. Beautiful, laconic and very logical composition, combining the three most famous Soviet monuments dedicated to the Great Patriotic War.

Despite the fact that the Sword of Victory began its journey in the Urals, and finished it in Berlin, the monuments of the triptych were built in the reverse order. Thus, the monument “Warrior-Liberator” was erected in Berlin in the spring of 1949, the construction of the monument “Motherland Calls!” Ended in the autumn of 1967. And the first monument to the series “Front to Front” was only ready in the summer of 1979.

The authors of this monument were the sculptor Leo Golovnitsky and architect Jacob Belopolsky. Two basic materials were used to create the monument - granite and bronze. The height of the monument is 15 meters, while outwardly it looks much more impressive. This effect creates the fact that the monument is located on a high hill. The central part of the monument is a composition, which consists of two figures: a worker and a soldier. The worker is oriented to the east (in the direction where the Magnitogorsk Iron and Steel Works was located), and the warrior looks to the west. There, where the main hostilities took place during the Great Patriotic War. The rest of the monument in Magnitogorsk is an eternal flame, which was made in the form of a star-flower, made of granite.

An artificial hill was erected on the bank of the river to erect the monument, its height was 18 meters (the base of the hill was specially reinforced with reinforced concrete piles so that it could withstand the weight of the monument and did not collapse with time). The monument was made in Leningrad, and in 1979, it was installed on the spot. The monument was also supplemented by two trapezes in height of a man's height, on which the names of the residents of Magnitogorsk, who received the title of Hero of the Soviet Union during the war, were listed. In 2005, another part of the monument was opened. This time the composition was supplemented by two triangles, in which you can read the names of all residents of Magnitogorsk, who died during the fighting in 1941-1945 (a little more than 14 thousands of surnames are listed). 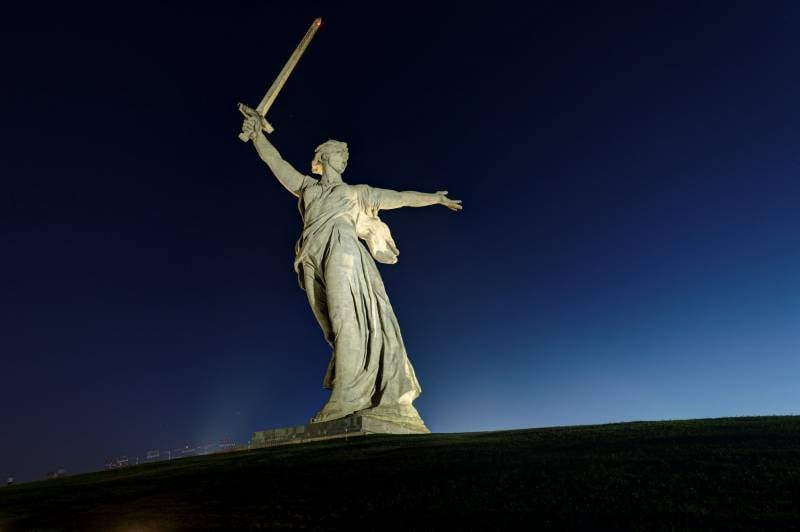 Photo by Alexxx Malev, flickr.com
The monument “Motherland Calls!” Is located in the city of Volgograd and is the compositional center of the monument-ensemble “To the Heroes of the Battle of Stalingrad”, which is located on Mamayev Kurgan. This statue is considered one of the tallest on the planet. Today it takes 11-place in the Guinness Book of Records. At night, the monument is effectively illuminated by spotlights. This sculpture was created by the project of sculptor E. V. Vuchetich and engineer N. V. Nikitin. The sculpture on Mamayev Kurgan represents the figure of a woman who stands with her sword raised up. This monument is a collective allegorical image of the Motherland, which calls on everyone to unite in order to defeat the enemy.

Drawing a certain analogy, one can compare the statue of Motherland Calling! With the ancient goddess of victory, Nika of Samothrace, who also called on her children to repel the forces of the invaders. Subsequently, the silhouette of the sculpture “Motherland Calling!” Was placed on the coat of arms and flag of the Volgograd region. It is worth noting that the top for the construction of the monument was created artificially. Prior to this, the highest point of the Mamayev Kurgan in Volgograd was the territory, which was located in 200 meters from the current peak. Currently, there is a temple of All Saints.

The creation of a monument in Volgograd, excluding the pedestal, took 2400 tons of steel structures and 5500 tons of concrete. At the same time, the total height of the sculptural composition was 85 meters (according to other data 87 meters). Before proceeding with the construction of the monument, a foundation was dug on the Mamayev Kurgan for a statue with a depth of 16 meters, and a two-meter-high slab was installed on this foundation. The height of the 8000-ton statue itself was 52 meters. In order to provide the necessary rigidity to the frame of the statue, 99 metal cables were used, which are under constant tension. The thickness of the walls of the monument, made of reinforced concrete, does not exceed 30 cm, the inner surface of the monument is a separate chamber, which resembles the design of a residential building.

The original 33-meter sword, which weighed 14 tons, was made of stainless steel in a titanium shell. But the huge size of the statue led to a strong swinging of the sword, this was especially noticeable in windy weather. As a result of such effects, the structure gradually deformed, the sheets of titanium plating began to shift, and when the structure was rocked, an unpleasant metal gnash appeared. To eliminate this phenomenon, a reconstruction of the monument was organized in 1972. During the work, the blade of the sword was replaced by another one, which was made of fluorinated steel, with holes made in the upper part, which were supposed to reduce the effect of the sail structure.

Once, the chief sculptor of the monument, Yevgeny Vuchetich, told Andrei Sakharov about his most famous sculpture “Motherland Calls!” “Often the authorities asked me why a woman's mouth was open, it's ugly,” said Vuchetich. The famous sculptor answered this question: “And she shouts for the Motherland ... your mother!”

8 May 1949 on the eve of the fourth anniversary of the victory over Nazi Germany in Berlin was the solemn opening of a monument to Soviet soldiers who died during the storming of the German capital. Monument "Warrior-Liberator" was installed in Berlin's Treptow Park. His sculptor was E. V. Vuchetich, and the architect was Ya. B. Belopolsky. The monument was opened on May 8 of 1949, the height of the warrior's sculpture itself was 12 meters, its weight is 70 tons. This monument has become a symbol of the victory of the Soviet people in the Great Patriotic War; it also personifies the liberation of all European peoples from fascism.

A sculpture of a soldier with a total weight of approximately 70 tons was produced in the spring of 1949, in Leningrad at the Monumental Sculpture factory, it consisted of 6 parts, which were then transported to Germany. The creation of the memorial complex in Berlin was completed in May 1949. May 8 The memorial was solemnly opened by the Soviet commandant of Berlin, Major General A. G. Kotikov. In September 1949, all responsibilities for the care and maintenance of the monument were transferred to the Soviet military commander's office of the magistrate of Greater Berlin. 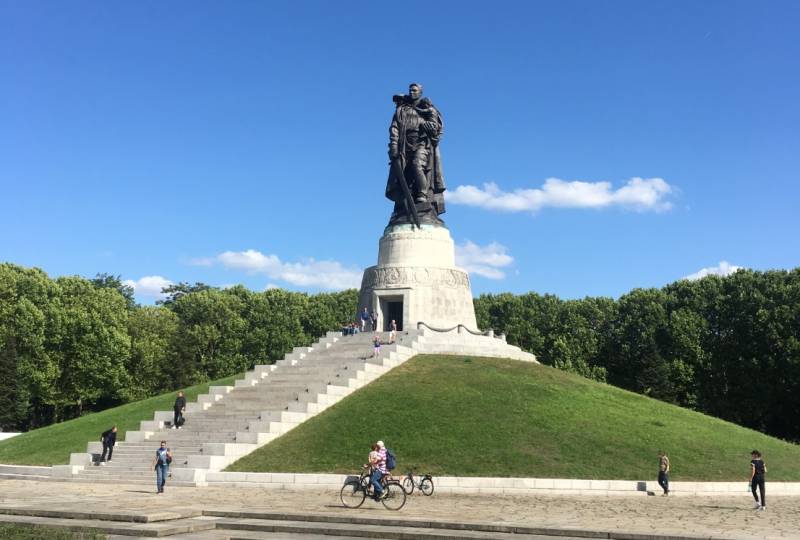 The center of the Berlin composition was a bronze figure of a Soviet soldier who stands on the fragments of a fascist swastika. In one of his hands he holds a lowered sword, and with his other hand he supports a rescued German girl. It is assumed that the real Soviet soldier Nikolai Maslov, a native of the village of Voznesenka in the Tisulsky district of the Kemerovo region, served as the prototype for this sculpture. During the storming of the German capital in April 1945, he saved a German girl. Vuchetich himself created the monument “Warrior - Liberator” from the Soviet paratrooper Ivan Odarenko from Tambov. And for the girl on the sculpture 3-year-old Svetlana Kotikova posed, who was the daughter of the commandant of the Soviet sector of Berlin. It is curious that in the sketch of the monument the soldier held an automatic rifle in his free hand, but at the suggestion of Stalin, the sculptor Vuchetich replaced the automatic rifle with a sword.

The monument, as well as all three monuments of the triptych, is located on a mound, a staircase leads to the pedestal. Inside the pedestal is a round room. Its walls were decorated with mosaic panels (the author is the artist A. V. Gorpenko). The panel depicted representatives of various nations, including the peoples of Central Asia and the Caucasus, who lay wreaths on the grave of Soviet soldiers. It is written over their heads in the Russian and German languages: “Today everyone acknowledges that the Soviet people saved their civilization from fascist pogromists by their selfless struggle. This is the great merit of the Soviet people to history humanity. " In the center of the hall was set a cubic pedestal, made of black polished stone, on which is installed a gold casket with a parchment book in red morocco binding. The names of heroes who fell in battles for the German capital and were buried in mass graves were written in this book. The dome of the hall was decorated with a chandelier with a diameter of 2,5 meters, which is made of crystal and rubies, the chandelier reproduces the Order of Victory.

In the fall of 2003, the sculpture of the "Warrior-Liberator" was dismantled and sent for restoration work. In the spring of 2004, the restored monument returned to its rightful place.