China Expansion in the Caribbean 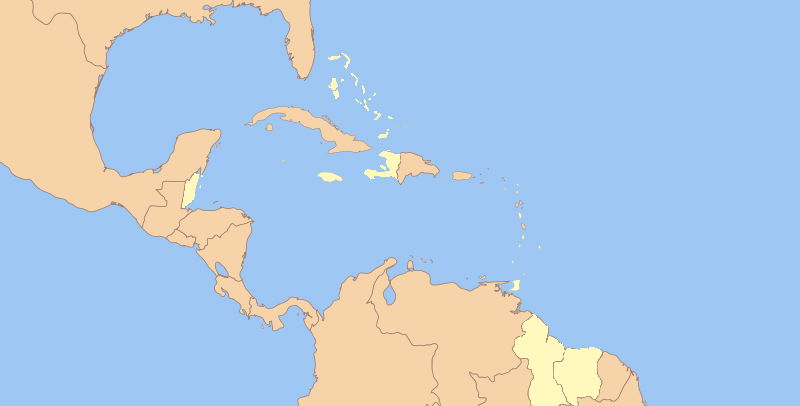 13-14 September in Trinidad and Tobago (Republic of Trinidad and Tobago - an island nation in the southern Caribbean, near the coast of Venezuela) was held Sino-Caribbean Forum. Its main result was an agreement on the allocation of the PRC to the Caribbean countries about 1 billion dollars in loans to stimulate economic growth in the region. China plans that this money will go to the development of financial institutions, infrastructure and tourism projects. Another important area to be developed is agriculture and fishing.


At the opening of the 3-th Forum of Trade and Economic Cooperation of the People’s Republic of China and the Caribbean, Vice-Premier of the State Council of China, Wang Qishan, said that his country would establish and expand economic cooperation with all the states of the Caribbean region.

According to Wang Qishan, during the 6 years of the forum, the cooperation developed at a very good pace, for example, the annual growth of trade turnover between these countries averaged 24% and in 2010 a year reached the level of 7,2 billion dollars.

And the PRC has already invested 400 million dollars in the economy of the countries of the Caribbean region. And this is not counting the funds that went through the line of gratuitous assistance for the construction of various infrastructure facilities (communication facilities, hospitals, a disaster warning service was created, including earthquakes and tsunamis). Funds were also allocated for the training of personnel of the Caribbean States, for the above facilities. In the near future, more than 2,5 thousand people will be sent to the PRC from the countries of the Caribbean region to enhance their professional training. Beijing makes donations to the Caribbean Community Development Fund (English Caribbean Community, CARICOM).

Reference. Caribbean Community (CARICOM) - This is a trade and economic union of Latin American countries. It includes such small island states as Antigua and Barbuda, Barbados, Commonwealth of the Bahamas, Grenada, Commonwealth of Dominica, St. Vincent and the Grenadines, St. Lucia, Trinidad and Tobago, Jamaica, Montserrat (overseas territory of the United Kingdom), Federation of Saint Keats and Nevis, Anguilla (self-governing overseas territory of Great Britain), as well as Belize, Guyana (formerly British Guiana), Republic of Suriname. There are associate members - Virgin Islands, Turks and Caicos Islands, 12 Latin American countries are observers (the most active - Venezuela, Mexico, Colombia). Bodies of the Caribbean Community: a conference of heads of state (supreme governing body), the Council of Ministers and the General Secretariat (executive bodies), there are also standing committees and specialized working groups. The headquarters of CARICOM is located in Georgetown (Guyana). Created community in 1973 year.

And all this, as reported by a high-ranking Chinese official, is the result of the already 30-year reforming of China. These reforms not only had a positive effect on the development of China itself, but also "give chances for the Caribbean region and the whole world." Wang Qishan promised that the strengthening of cooperation between the PRC and the Caribbean countries would lead to an economic upturn, improvement in the well-being of the population of the region, development of the integration process and increased influence of the countries of the Caribbean region on the world stage.

The Chinese are very cautious about their investments, so a special agreement was signed with the Caribbean countries regarding the protection of investments.

A sort of springboard for the economic expansion of China in the region was Liberty Island. With Cuba, Beijing established relations in September 1960, almost immediately after the victory of the Cuban revolution. The Chinese supported the Cuban revolution, because at that time they opposed the United States. And Cuba, in turn, was the first of the Latin American countries that officially recognized the PRC. After the collapse of the Soviet Union, it was the Chinese "comrades" who in many ways helped the Fidel Castro regime by helping the Cuban economy, oriented towards the socialist system. Currently, China accounts for more than a quarter of Cuba’s exports (sugar, nickel, tobacco, coffee).

However, at present, China is not limited to ties with Havana. So, according to the IMF: from 1990 to 2008, China’s trade with the countries of the region grew from 20 million to 2 billion US dollars. First place in the list of main trading partners of China is the state of Antigua and Barbuda (it accounted for up to 600 million of goods turnover), Trinidad and Tobago, Jamaica, the Bahamas and Dominica.

Basically, China exports natural resources from this region. But, on the other hand, the PRC is actively developing the infrastructure of the Caribbean states. So, in 2001, the Chinese company Hutchison Whampoa Limited (it took the ports on the Pacific and Caribbean coast of the Panama Canal into concession) invested in building a port in the Bahamas, its value was 2,6 billion dollars.

The patronage of China is beneficial to the Caribbean countries, most of them are economically weak countries, their infrastructure is very vulnerable to regular natural disasters. Therefore, any help from China is very important for them - investments are being made, the infrastructure of countries is developing, its stability is increasing before the blows of nature. Most of these states fall into the category of "who pays the girl and dances." China "buys" their appreciation: Grenada in 2003 year claimed the stability of relations with Taiwan as a guarantee of prosperity of the two states, but already in 2005, the Grenadian authorities broke off relations with Taipei in favor of mainland China. Beijing paid 6 million dollars in compensation for projects already started with Taiwan, pledged to prepare the cricket stadium for the international championship, build an 2 thousand houses, a hospital, and help in the development of agriculture. Dominica in the 2004 year, as soon as it received a loan from China in the amount of 112 million dollars for 6 years, immediately recognized only one China.

China receives new sources in obtaining natural resources, especially the Chinese are interested in the oil and gas sector. So, in Trinidad and Tobago, oil refineries are developing, which are important in light of the rapid development of cooperation with Venezuela. Previously, this area was almost completely controlled by the United States; now the Chinese are oppressing them.

In addition, China takes into account the strategic importance of the region and approaches the Panama Canal, which is of great importance for the Western Hemisphere. The PRC is leading a real offensive in the economic sphere, crowding the Americans in their former patrimony. And in Beijing they are not going to be limited only to the economy, they plan to develop military-technical cooperation. In November, a white paper was published in China 2008, which dealt with the Chinese long-term strategy for Latin American and Caribbean countries. It openly states that Beijing plans to develop military-technical cooperation with the states of the region, actually in the underbelly of the United States. With the goal of China's national security.

We are in Yandex Zen
The head of the DPR visited Gorlovka, the cadets took the oath, and in the "Olympic" hosted the forum "Donetsk Republic"
"Rebel Aviation of Venezuela". In memory of the commandant Hugo Chávez is dedicated
5 comments
Information
Dear reader, to leave comments on the publication, you must to register.