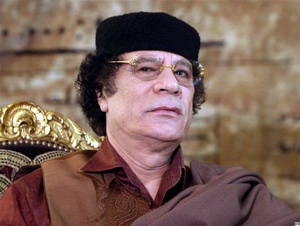 The events of recent weeks in Libya have made the question of the legitimacy of the authorities from the point of view of international law from abstract theoretical especially practical. At first, a number of Western leaders used the concept of legitimacy to justify a military operation against Libya. Then this idea was carried out as a unified position of the members of the G-8 club. In the Declaration “New Commitment to Freedom and Democracy” at the G-8 Summit in May 2011, this idea was proclaimed with a pathos not peculiar to serious political documents: “He [Gaddafi] has no future in free and democratic Libya. He has to go. ”

Considering that Gaddafi does not occupy any government posts, the question immediately arose: how and where should he go? There is no legal answer to it. Another question arises: what kind of future “free and democratic” Libya will be if (given that Gaddafi leaves power) there will be no place for citizen Muammar Gaddafi in it? Moreover, the Declaration speaks about the loss of legitimacy not only by Gaddafi himself, but also by the Libyan government: "Gaddafi and the Libyan government have not fulfilled their obligation to protect the population of Libya and have lost their legitimacy."

What conclusions can be drawn from this statement? First, it has now become clear how the legitimacy of a government is lost. It turns out that now it is being lost due to the failure to fulfill the obligation to protect the population. Previously it was assumed that legitimacy is acquired or lost in the elections or by the support of the majority of the population. Secondly, it is now explained to us who decides the issue of the loss of legitimacy. These are countries belonging to the G-8 club. Previously, we thoughtlessly believed that this question was within the competence of the population of the corresponding state. Thirdly, it has now become clear that legitimacy can be lost completely (and if so, then there is a partial loss). Again, with bitterness, you recognize your limitations as you have previously mistakenly assumed that legitimacy is an integral concept and “it either exists or it does not exist”.

As already mentioned, Muammar Gaddafi does not hold any government positions in Libya. He is the Leader of the Revolution, and the Constitution of Libya is the Holy Quran. The country's governance is legally governed by the provisions of the 1977 Declaration of the Establishment of Democracy and current legislation. In addition, neither G-8, nor any state made statements regarding the legality of Gaddafi and the Libyan government. If this is so, then do the G8 countries of Gaddafi and the government of Libya recognize "legal but illegitimate" or "both illegal and illegitimate"? But the question of the legitimacy of the G-8 club itself and the numerous "international conferences on Libya" for some reason are not liked to discuss. Although at the beginning of the conflict, Russian Foreign Minister Sergey Lavrov raised the question of the “problematic” legitimacy of these conferences. And since the legitimacy is either there or it does not exist, an indication of its “insufficiency” is a diplomatic way of stating its absence.

Well, if we turn not to the “discoveries” of the G-8 club, but to the current international law? How to determine the question of legitimacy in terms of objective and legal signs?

First, the military actions in Libya raised the important question of the legitimacy of the party opposing the Libyan people. On this side are two main subjects - internal and external. Both, to put it mildly, have problems with legitimacy.

Let's start with the external subject. With the beginning of the armed actions of the NATO member states against Libya, these countries became parties to the armed conflict. Let us see what their actions are and whether they comply with the norms of international humanitarian law specifically created to limit the actions of the parties to the conflict. We see the bombing of civilian objects, schools, universities, hospitals, residential buildings. Bombs are buildings of state institutions. Civilians are dying. NATO deliberately destroys objects that are important for the livelihood of the people of Libya. All these actions are expressly prohibited by international humanitarian law, in particular articles of the first, third and fourth Geneva Conventions for the protection of victims of the war 1949.

In addition, we recall that the NATO countries did not enter into an existing armed conflict, but prepared and started it. And they began by a gravest international crime - aggression. No reference to UN Security Council resolutions can justify aggression, since not a single paragraph of these resolutions provided for the bombardment of civilian objects and the conduct of ground military operations. Thus, the legitimacy of the "international" side of the Libyan conflict is out of the question.

As for the "internal" side of the conflict - the so-called "opposition", then its actions do not comply with the norms of international humanitarian law. The shelling of cities, the destruction of prisoners of war, the destruction of civilian objects - all this is recognized as international war crimes. In addition, the cruelty with which the massacre of civilians and prisoners of war is carried out clearly shows that in fact we are not even dealing with a party to the conflict. Article 1 of Additional Protocol No. 2 (1977 of the Year) to the Geneva Conventions 1949 of the year establishes that only “anti-government armed forces or other organized armed groups that, under responsible command, exercise such control over a part of its territory, are“ party ”to an armed conflict , which allows them to carry out continuous and concerted hostilities and apply this Protocol. As we see, satisfying the first three requirements (command, control of the territory, concerted actions), the so-called The “opposition” does not satisfy the fourth requirement - the application of the norms of international humanitarian law. That is, from the point of view of international law, there is no reason to talk about this very “opposition” as a party to the conflict. The most accurate legal qualifications of Libyan “oppositionists” are criminals according to the internal law of their country and criminals according to international law. Under Libyan domestic law, they are guilty of armed insurrection, murder and destruction, under international law, of violating the Geneva Conventions for the Protection of War Victims of the 1949 of the Year and the Additional Protocols of the 1977 of the Year.

We note that in many respects the military failures of the Libyan authorities under Gaddafi were associated with their consistent implementation of international humanitarian law, with an attempt to save the lives of people, not only civilians, but also befuddled propaganda by some of the young Libyans who were on the side of the rebels. But the side that is tied by tough bans on forms and methods of warfare, in military terms, is in a less advantageous position compared to the side, these bans are not related.

Few people thought about the possible real meaning of a TV show, which included creating a copy of the Green Square in Tripoli, followed by a demonstration of its capture by “rebels” and supposedly popular jubilation about this, shown by Al-Jazeera TV channel 21 of August. After the TV channel was caught red-handed and the fake character of the square was installed, an “explanation” of this fraud was thrown to the public. Say, these shots were removed from propaganda purposes to suppress the morale of the supporters of Gaddafi. Perhaps this explanation and logical, but not the only possible and not the most convincing. Given the subsequent events, the Aljazir props most likely had a different, more sinister meaning.

The rapid capture by the rebels of Tripoli was explained by the “military force of the opposition”, and “the powerful assistance of NATO from the air” and the “self-confidence of Gaddafi”. However, the most natural explanation for such a “surrender” is the attempt by the Libyan authorities and the army to save the civilian population of the capital. In this regard, the fake Green Square is not only a propaganda, but also a military move. Probably, the Libyan authorities received reliable information (perhaps in the form of a direct ultimatum) that Tripoli would be taken at any cost and in case of resistance - with the complete destruction of the city. And here, the sham square would become not just a desirable detail, but an absolutely necessary means of a grandiose deception of the world community - hiding from the world the fact that Tripoli was demolished from the face of the earth.

It must be admitted that the actions of the Libyan leadership, fully compliant with international humanitarian law, are the only island of wisdom and mercy in this insane war. From the point of view of international law, in fact, the Libyan leadership headed by M. Gaddafi not only was and continues to be legitimate, but is also the only legitimate side of the ongoing conflict.

Within a few months from the beginning of 2011, three new tools were “designed to legitimize” the destruction of objectionable governments and the states were captured, tested and put into international circulation: declaring the elections successful, but recognizing the victory of the loser candidate; declaring the government of the country or its leader no longer legitimacy; and, finally, the approval of these decisions by UNSC resolutions ...

We have yet to realize that the situation in Libya has become a moment of truth for determining the legitimacy of the authorities not only in Libya itself, but also in a striking way - all over the world.