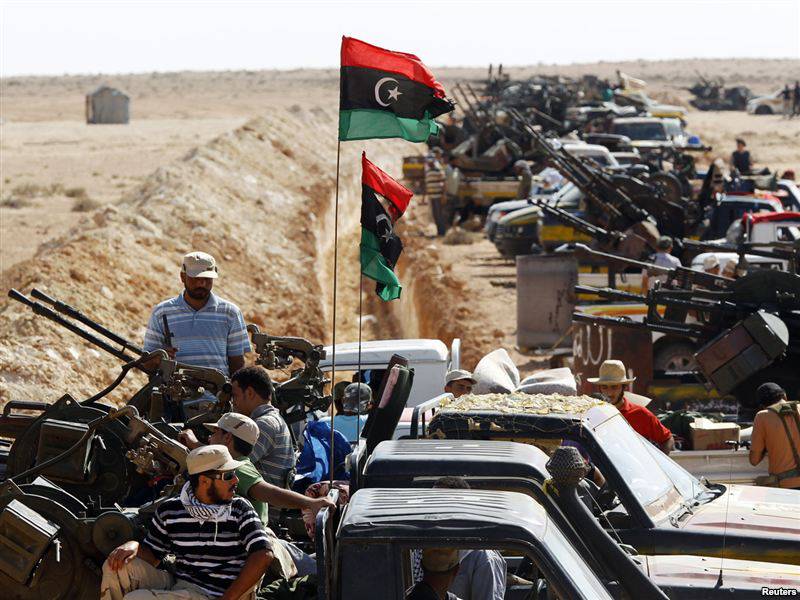 After the assault and fall of the capital of Libya - Tripoli, the forces of the rebels, supported by the Western coalition, have already conducted five "assaults" (for us, the assault is the capture of Berlin, the Amin or Grozny Palace, but not the attempts of the cities to enter the city) Sirte and Bani Walid. And all these attempts ended almost the same - the flight of the attacking side from the battlefield, with the first serious resistance. The question arises, what is happening?

Especially interesting, these events look after the capture of Tripoli. There are several factors to consider. Firstly, the capture of the Libyan capital has been prepared for a long time, perhaps from the end of spring. It was from the end of May that messages began to come from Qatar about the construction of a double city, full-scale models of buildings and Tripoli squares, on which they finally began to conduct an assault on the city. Fighters of private military companies (PMCs), Arab and Western special forces "dragged" to Tripoli. Then the mock-ups were used again - for the informational cover of Operation Mermaid. Secondly, the factor of betrayal of the highest military ranks was fully used to capture Tripoli. Thirdly, the tactics of the “waves” were used, which were coordinated among themselves in terms of time and tasks. The first wave became a reconnaissance battle, in addition, it drove ordinary residents home, leaving the city completely empty. The second wave (air assault) consisted of groups of Western and Arab special forces, plus the activation of Islamist cells. She cut through the defense of the city and the disorganized units of Gaddafi were localized along the centers of resistance. In the third wave, the crowd went already, which was shown to the whole world, but the main role in it was played not by the rebels from the east of the country (due to their almost zero fighting efficiency), but by the Islamists. Fourth, a successful landing was carried out. The landing party was able to land on the embankments and in the port area almost unhindered, since on the shore of the capital, efforts aviation NATO had absolutely no means of fire that could knock out the landing on the way.

Attempts to take these cities on the move failed, the retreating units of Gaddafi, because of their desperate position, were entrenched there and put up fierce resistance to the enemy, who tried to attack almost from the traveling position. And then the factors that led to the defeat of other attempts to capture these cities began to play a role.

Thus, the locality itself helps supporters of Muammar Gaddafi. Bani Walid is an oasis, that is, the area around it, a flat desert, in which there are practically no natural shelters. From shelters only dunes and the bed of the dried river. There is water in the city, and once there is water, there is also a significant amount of greenery, i.e., good opportunities for sheltering vehicles and artillery. At the same time, it is difficult to detect the artillery of Gaddafi’s units from the air, positions are opened only at the time of its operation. NATO Air Force aircraft is not in a position to destroy all the heavy weapons of Gaddafi’s forces, while reconnaissance issues target designation, strike aircraft hit, until they strike, a very significant time will pass, during which you can change your position.

Gaddafi's opponents are fighting not only with Gaddafi units, but also local militias. This gives an advantage in the knowledge of the terrain - the reconnaissance of the enemy's positions, observation of him. Several reports have already passed on the successful strike of Gaddafi’s rocket launcher systems against the enemy. Apparently, the local well track the accumulation of enemy forces and they are immediately hit by artillery. In such a situation, it is impossible to prepare for the assault on the city without being noticed. So, knowingly, the “three assaults” of Bani Walid began, according to the media, after an artillery strike against the PNS force clusters.

The Western command cannot use the experience of Tripoli in Sirte and Bani Walid. There is no one to betray and surrender the defense sector, i.e. there is no “Trojan horse”, as in Tripoli. Cities are ready for defense. The rebels have no experience, and the desire to give their lives, storming the city on the present - house by house, quarter by quarter. The most combat-ready part of them is the Islamists, ready for terrorist attacks, terror, an offensive against a disorganized, broken enemy, but not a real head-on fight. Forces of the Arab and Western Special Forces are also not enough for this, and it is not their task to storm the cities. General military units are needed - a brigade or two, reinforced with additional armored vehicles, artillery.

Bottom line: for a successful assault on the cities of Bani Walid and Sirte, it is necessary to conduct a full-fledged combined-arms operation. Massive artillery strikes and air strikes, the advancement of armored vehicles and infantry in the main areas, the gradual advancement of assault groups (up to a company) under the cover of artillery fire and air strikes against strong resistance units. The problem is that the PNS does not have such a tool. So, under the Bani Walid mostly Islamists are located. They are able to fight as partisans, no more. In addition, the Islamists categorically do not like the command from the West, now they show their temper, they have their own plans for Libya, which differ from the plans of Rome, Paris and London. The Islamists do not have competent general commanders, there is no operational headquarters that could draw up a competent assault plan.

The same reasons are valid under Sirte, only there is another feature - under Sirte, the bulk of the rebels are men in slippers, with hookahs, with one shop for an automatic, who retreat at the slightest resistance. They do not know how to fight and do not want. That is why we see all the new “assaults”, the essence of which is an attempt to enter the city, after the air strikes of the NATO Air Force and artillery attacks. With the resistance of the "snipers" Gaddafi, the militia, the whole "horde" immediately makes legs.

Therefore, the West wants to push through the UN Security Council the decision to send a "limited peacekeeping contingent", apparently, just as part of one or two reinforced combined-arms brigades. Then the city will take, telling the world about a successful "humanitarian operation".

We are in Yandex Zen
Innovation Day of the Southern Military District: layouts and models
Soldiers for rent
37 comments
Information
Dear reader, to leave comments on the publication, you must to register.